It's under File and scripts or run script or something. I've switched off the old machine now. Once you've selected file it's pretty easy to find where to go, then you should have a window pop up with various script related options. You may need to open the script first for it to put it on screen to then select to run. It's all in that window. Once you've done that click on the script title and select run script.
E

OK, it seems to be File/Scripts. When I identify the script, it tells me "Script Starts from Scratch", which is a good thing. Then, I select "Alert when complete" and, finally, "Run Script". I am immediately alerted that the "Script [has] stopped". I press OK and that's that. What now?

EDIT: Forget the above! I edited the script and it was still pointing to disk "E:". After changing that to "C:\" it worked at once, but it ended in less than one minute with "Script Stopped". A WAV file is shown called "Main". What went wrong?
F

They most certainly are. The folder used to contain just Front.wav and Rear.wav, with a date stamp of 9/9/18 11:36 PM. They haven't been modified, but now there is "Front.pk" created five minutes ago. And, as I said, the SQ-encoded WAV has been opened by Audition. I don't know if it has been somehow modified (in memory).
F

Don't worry about the .pk file.

I'm pretty certain this is nothing to do with sample/bit rates from memory, and I'm pretty certain I had a similar problem to begin with. Have you gone through this thread as it may have been covered by me when I could remember or by somebody else.
E

I think I read all eight pages (nine now). I don't think I missed anything significant. I might be mistaken, but I don't think there are any specific instruction on how to install Phasebug, how to tell Audition where it is, where to place the script or how exactly it should be run. I know all that now thanks to you.
F

Hmm. I reckon you've got an issue with PhaseBug as that's the first process after opening the file. If you go to Effects and down to VST is PhaseBug showing? I remember this being a steep learning curve for me!
E

Yes, it appears there, but it was unselected. After selecting it, Audition says: ""Some selected plug-ins are VST instruments, which are unsupported for audio processing. To enable these plug-ins for mIDI sequencing in Multitrack View, Use the VSTi plug-in manager in the Sequencer panel". Unfortunately, that is far from being self-explanatory. I have no idea where the Sequencer panel might be located.

EDIT: Oddly enough, after re-selecting Phasebug and launching the script again, it started processing. It seems to be working now! It is now "Applying Center Channel Extractor to Selection", and it says there are 9 minutes left. Amazing. It looks as if you've solved it for me. Many thanks. Mike, what's your opinion as to the efficiency of this script? Is its result as good as that of a Fosgate Tate II, or does it have something to be desired? Is it better than Hotto's Java Quadraphonic Matrix Decoder, as far as SQ goes?

I've not experienced any quad hardware I'm afraid, but I've compared a vinyl decode to a discrete official SACD of the same mix. It was pretty good! It's not perfect and there is some leakage and perhaps some robotic sounds to that leakage if you isolate channels, but as a whole it seems to play well with excellent front to back channel seperation. It can take a while to decode though!
E

Wonderful! Many thanks for all your help, Mike. Much obliged.
F

You're very welcome. Let me know what you think of your results!
E

Sure will. It's still processing. The wav file lasts 73 minutes.
E

The process has just ended, but I'm confused. The Front.wav and Rear.wav files haven't been modified at all. There are new Front.pk and Rear. pk files (less than 2MB each). What am I supposed to do now?

EDIT: Strike that. I suppose I should probably save the two open "Main" files in Audition memory, named "Front.wav*" and "Rear.wav*", respectively. I'll repeat the process to make doubly sure.

EDIT2: When I read the messages in this thread, I saw some mention to filtering by about 3dB, if I remember correctly. Is that something one should do beforehand, or does the script do it on its own? Or is it no longer required? I'm asking because, unless I inadvertently did something unusual to cause it, the rear WAV file's amplitud appeared larger than that of the front WAV. Is that supposed to be normal?
Last edited: Sep 10, 2018
E

I still have to listen to the results, but, meanwhile, here are two series of waveforms with the results of the decoding done by Audition and Hotto's Java Quadraphonic Matrix Decoder, respectively. No attenuation or amplification was applied at any time. What do you think? 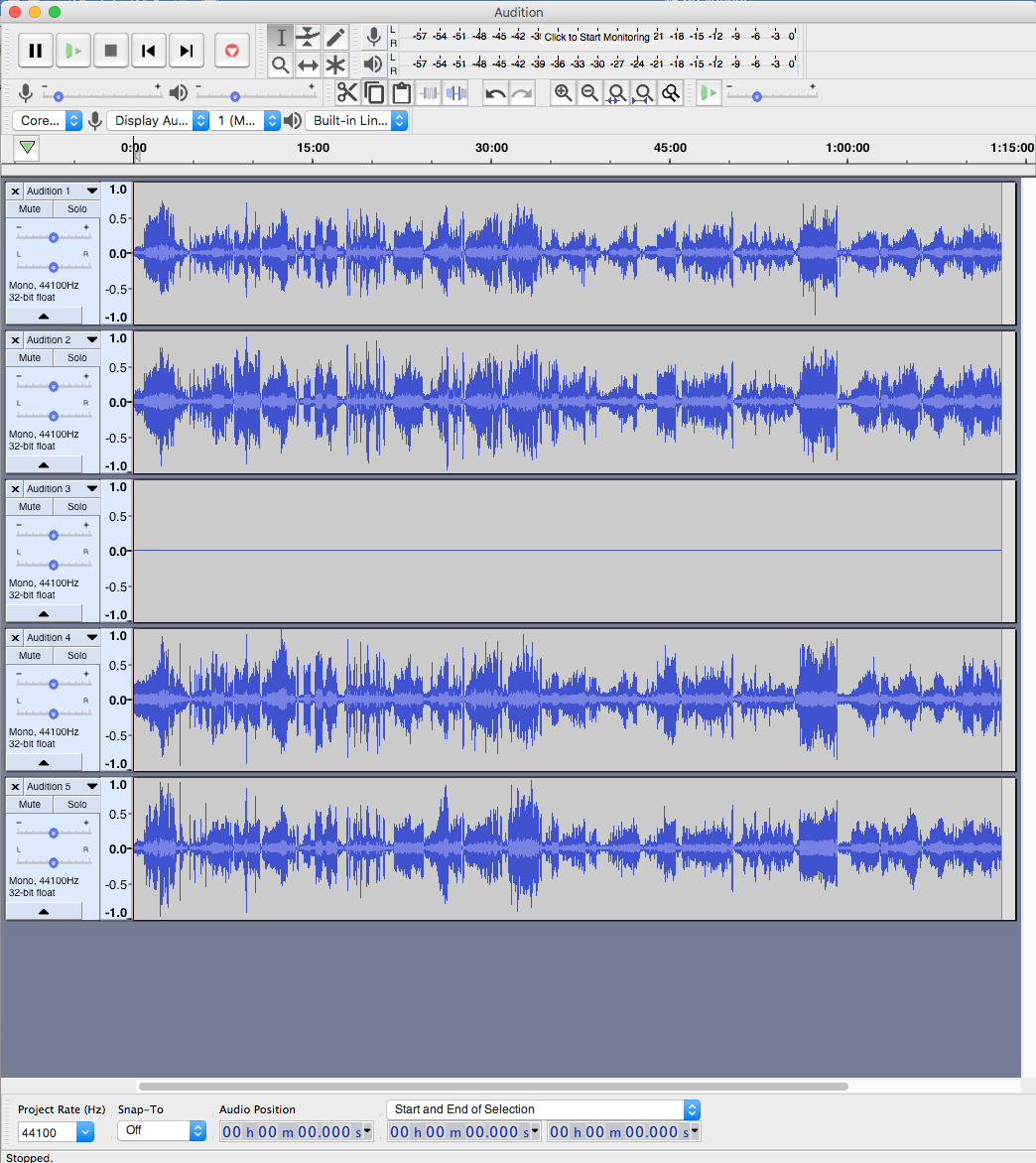 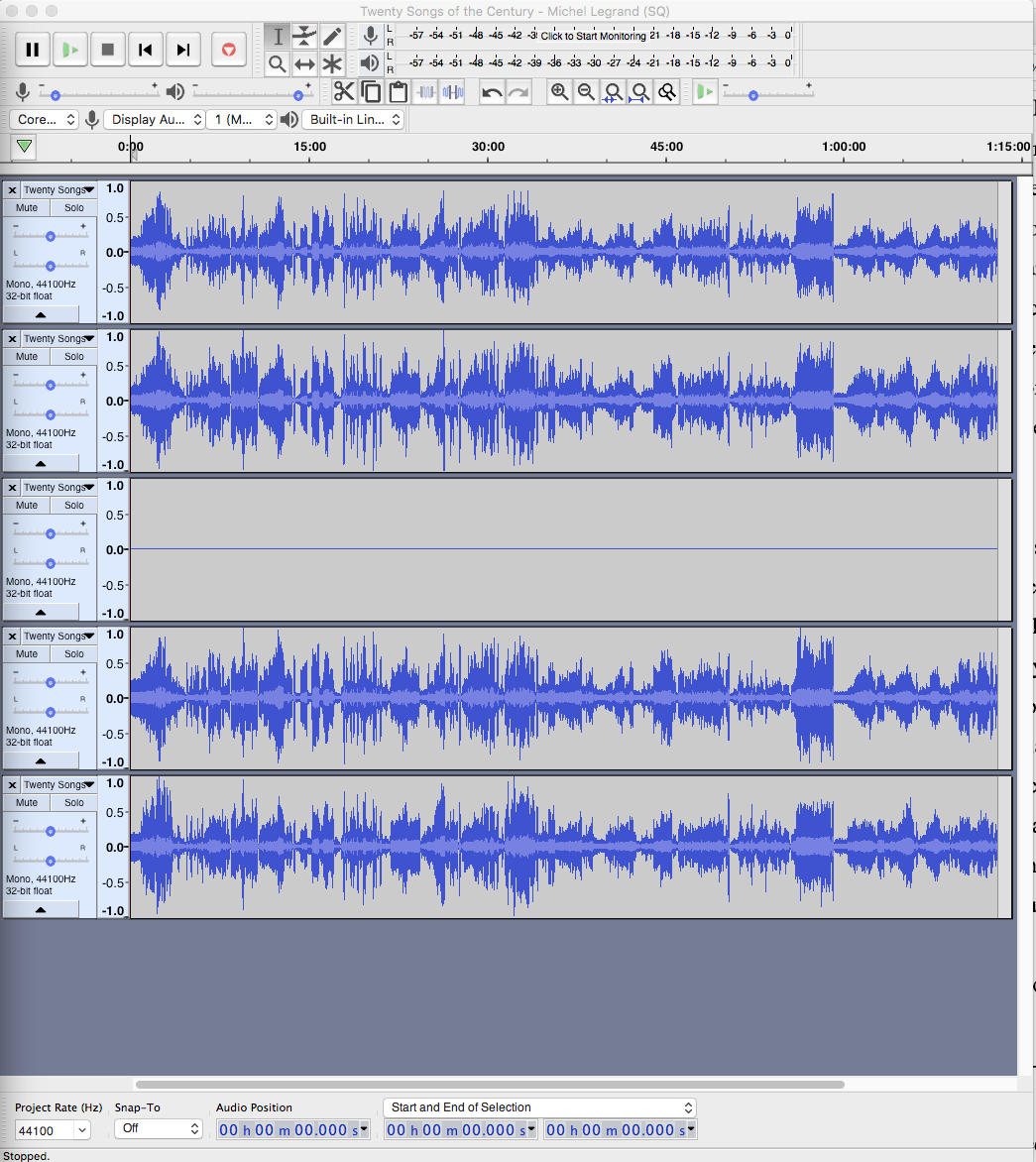 Hi, oh yes you're supposed to be at least -3db from peak 0 before you start, but if you haven't clipped in processing you could be fine. Yes, the files you are left with in Audition should then be saved as front and rear. I guess the .pk files are something to do with undoing??? Once you're done they're redundant but don't seem to delete themselves. I don't recall any issues with the rear channels being louder when I decoded. Maybe it's the mix. The only thing that looks obviously lower is front left and not by masses. Have you tried a hifi set up record to see if your left and right channels are outputting equally from your cartridge? I doubt it's unusual to have a bit of difference and I think that kind of possibility/range is mentioned in some if not all stylus/cart specs.
E

I have a stereo turntable elsewhere, not connected to my Home Theatre, and I don't have any actual quadraphonic media. A friend let me copy the output of an SQ-encoded album on his stereo turntable. I've listened to portions of both decodings (Hotto's Java Decoder) and Audition 3.0. They aren't the same, but they sound roughly the same and are probably equally acceptable. I know Hotto's decoder (which can also decode QS [quite unnecessary if one has a Dolby Digital Home Theatre], EV-4 and DY) doesn't have "logic", so I was expecting the Audition script to be superior, but I don't find it that obvious. I really don't know which one is "better".
F

If you can isolate to play just front or rear pairs on both samples and compare that could help you with your decision. Otherwise, if there's not enough difference for you then maybe the cheapest and most convenient route is what's best for you. Results could also be affected by the stereo split (you want the least leakage between L & R before decoding) of the cartridge.
K

It would be cool to see this rewritten in terms of modern Adobe Audition. I'm sure the current version (CC 2019) has much-upgraded algorithms compared to what was available in Audition 1.5, copyrighted 15 years ago.
Q

k-ifyouwant said:
It would be cool to see this rewritten in terms of modern Adobe Audition. I'm sure the current version (CC 2019) has much-upgraded algorithms compared to what was available in Audition 1.5, copyrighted 15 years ago.
Click to expand...

It has to be a version with center-channel extraction.
K

quadsearcher said:
It has to be a version with center-channel extraction.
Click to expand...

Of course CC 2019 has center channel extraction.
Effects -> Stereo Imagery -> Center Channel Extractor...
You must log in or register to reply here.

Live Monitoring SpecWeb without a 5.1 Soundcard