Released in March, 1974, Buddha and the Chocolate Box saw Cat Stevens reuniting with producer Paul Samwell-Smith after self-producing Foreigner. It also saw him return to the more concise pop-folk structure of his earlier work, while at the same time pointing toward the increased influence that spirituality would play in his life in the years to come. Like its predecessor, Buddha and the Chocolate Box reached #3 in the US charts, but did better on the singles charts, yielding the #10 single Oh Very Young and the top-40 single Ready.

Like Foreigner, Buddha and the Chocolate Box is one of the only Cat Stevens albums to boast a genuine discrete quad mix, and it's also notable for being the only known (at time of writing) non-Jethro Tull quad mix credited to Robin Black. 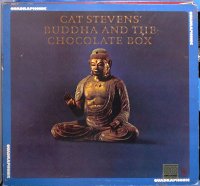 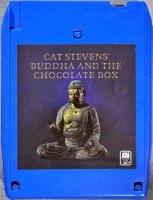 I was a closet Cat Stevens fan in the mid 1970s. My friends all liked Aerosmith (as do I) but Cat was not cool, so I listened alone at home. My first wife (don't ask) was a huge Cat Stevens fan so I was finally able to drag out my quads and seriously listen. There is really a distinction between the earlier stuff with him and a guitar and a little other material compared to the more R and B later stuff, like this. Of that second generation, this is my favorite. I like several songs on this offering very much. And its nice to have a decent mix! I have the SQ, nothing else, and through the Tate is quite discrete, although no doubt the Q8 would be even more exciting? Either way, its one of my faves from Cat. 8+

Cat Stevens is usually lumped into the "singer/songwriter" group of the seventies but I think he stands apart in his uniqueness. He could write some absolutely beautiful songs (Morning Has Broken, Oh Very Young) and some rockers, beautiful at the same time (Ready).

A very enjoyable album and the sound/mix is great.