This was one of A&M's Q8-only quad releases, issued before they started doing SQ quad vinyl alongside their quad 8-tracks in mid-1973.

Although I own this tape, I've never actually been able to listen to it, and I've heard varying opinions on whether the quad mix is real or not. I'm hoping that a respondent to this thread might be able to provide definitive proof, or at least an informed opinion. 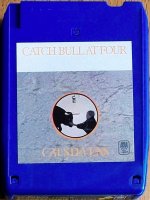 I'm going to have to say it's fake. Why would anybody go through what it takes to do a remix when the result is .... this? There is definitely some delay, there's a whole bunch of EQ-ing and I'd even wager a bet that there's some weird compression going on. My Q8 is in pretty good shape with fresh Win-Gib pads and the whole length of the tape on both programs, the Back Right channel has some noticeable flutter. But, it's not really flutter.... it's more like a rhythmic pumping.... it's most noticeable on the vocals.

I'd really like to know what the thought process on a release like this was. I just can't imagine any record company worth anything, would go through all the expense to get on board with Quad only to spend the time and money to put out half-baked ideas like this. Obviously, they knew what they were doing with releases like Billy Preston and Joan Baez, and they're contracting with Columbia for duplication, so I would imagine there was some sort of communication back and forth.

Ok, granted, there's a few songs on here that are little more than Cat and his guitar. Obviously, ain't much ya gonna do with that. But on the songs with string arrangements and drums.... at least give us some front-to-back separation to let us know somebody is alive.

Sadly, I'm not familiar enough with the stereo release to say whether these are just the stereo tracks forced through some sort of passive decoder. If these did come from multitrack.... why do Cat Stevens the disservice of fouling up his music so bad and doing the customers and fans such disservice by selling them a lack-luster product?

I'm left with more questions than answers. I can't fault the content, but the mixing and the fidelity are sub-par at best.

Thought process? Easy, Island Records recorded this. A&M was licensed for the US. They likely didn't have the multi-track masters and/or didn't bother to get them.

A&M thought "we need Quad product." Likely, CBS was also anxious to get A&M Quad product out, too. It is very probable that their pressing arrangements through RCA were already a done deal. That change took effect in "75 or '76. This is why all A&M later Quad projects were CD-4.

Cat Stevens was one of their hottest acts at that point. So, a Quasi-Quad mix was concocted. IMHO, that's all you need to know about this turd of an engineering job. You could probably do a better job w/Sansui or Marantz Vari(o) Matrix synthesizing.

I bought the 2ch LP in its' first week of release. IMHO, either this or Izitso (2ch only) are his most undeservedly overlooked albums. Yet, they are among his best musically, IMHO. Again, I bought the Q8 when it was released. I bought this one for a third time on Japan CD. The CD or a clean 2ch LP would be my choices for better ways to listen to this album. If you're a fan, you need this album in 2ch.

Two of the tracks don't do much for me: Silent Sunlight and Freezing Steel. Everything else is stellar! 18th Ave, Angelsea, and Sweet Scarlet are faves of mine.