Tears For Fears first new album since 2004... The Tipping Point!

Finally, after nearly 18 years since their last album, Tears For Fears announced their new album The Tipping Point, coming in Feb 2022. The title track is available now.

Indeed, Everybody Loves A Happy Ending wasn't an ending after all...

I shared the news with my siblings and they have both ordered the special edition from SDE, they may not have stock long.

Could there be a later streaming only Atmos version? 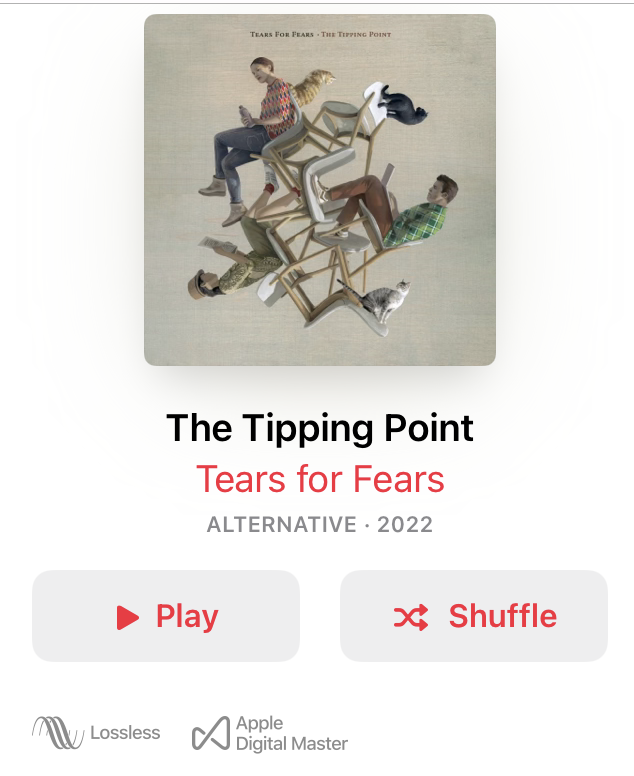 What am I missing? Is there something in that image that suggests Atmos is coming? I don't see it.


J. PUPSTER said:
Could there be a later streaming only Atmos version?

Cheezmo said:
What am I missing? Is there something in that image that suggests Atmos is coming? I don't see it.
Click to expand...

no, you are not missing anything, only a hopeful wish, and hoping a better result than the Tattoo You songs that appeared in Atmos!

But if we'll ever get surround for this album, this may be the only way to get it.

Not much closer to surround just yet eh -too funny 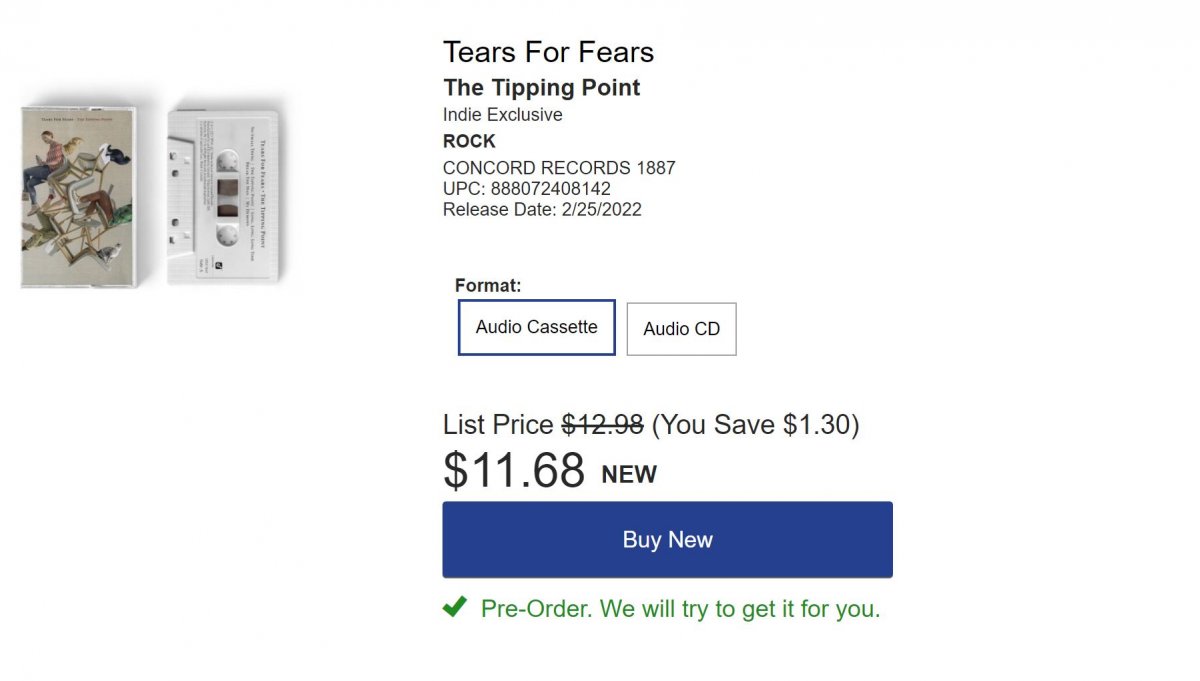 J. PUPSTER said:
Not much closer to surround just yet eh -too funny

yeah, but in an age of 180 gram repressings, it should be a CHROME cassette!!!
O

kap'n krunch said:
yeah, but in an age of 180 gram repressings, it should be a CHROME cassette!!!
Click to expand...

I'm told that it is no longer possible to manufacture chrome or metal tape, the chemicals needed are too nasty to be allowed almost anywhere in the world. And the market would be tiny so why go to the trouble when you can sell them Ferric crap? All New Old Stock of chrome and metal tape was exhausted a few years back. The last company duplicating tapes (for audio books) had to take chrome off their order form.

Finally got around to listening to this and it is fantastic! Much better than their last effort. Its a shame that there looks to be no surround mix. It would work great for the title track.

Agreed. Steven Wilson must not have been available. Maybe eventually they will release one?

ELAHE is a freaking CLASSIC! Took me years to make sense of it but it's up there!

Agreed. It's a solid album. All killer, no filler. Really hope SW gets an opportunity to do a surround mix someday.

I’ll have to give it another go then. It hasn’t grabbed me yet but things can change! Probably haven’t listened to it in about a decade.

ELAHE is literally my favorite TFF album of all time.

fthesoundguy said:
I’ll have to give it another go then. It hasn’t grabbed me yet but things can change! Probably haven’t listened to it in about a decade.
Click to expand...

There are two different masterings of that album. One is bad and the other abysmal
I went into this topic with detail on this thread: The problem I have with "Everybody Loves a Happy Ending" | The Tears For Fears Connection
The songs are mostly fine, although it's a bit less adventurous than their earlier work and I would've cut 1-2 songs to keep it at a normal LP length.
Sadly, the new single doesn't suggest they've learned from the mastering debacles, as it's still painful to listen to on headphones (although not quite as egregious as "I Love You But I'm Lost" was...).

I sense a couple of road trips coming on.... 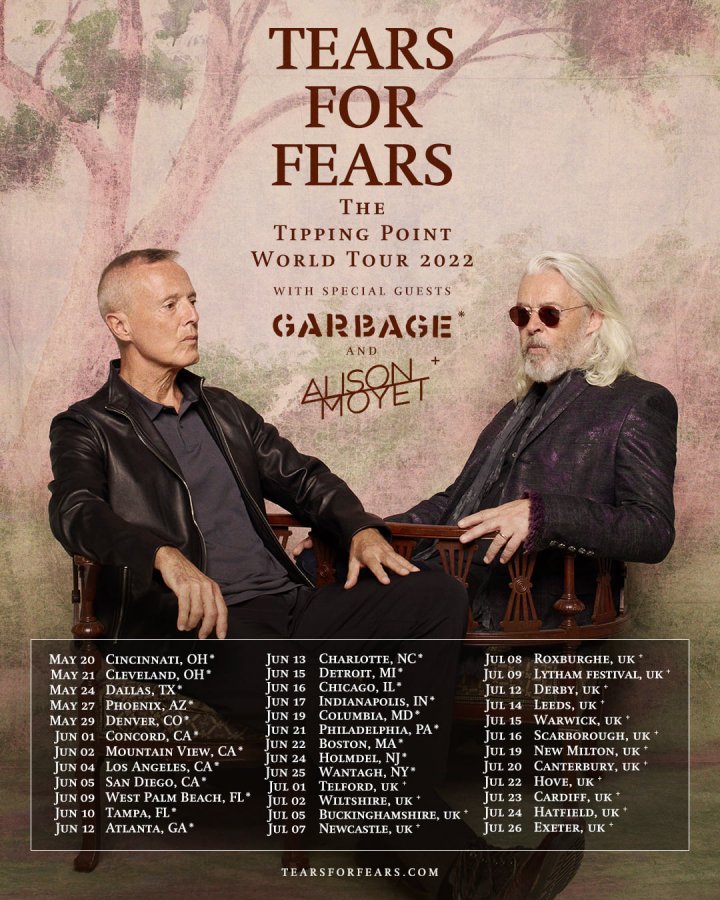 Nowhere near us in Portland OR. *grumble*

I'll be bringing the whole family to the show in Philly... TFF was the first band I totally geeked out over, sponging up every single for the B-sides (riding my bike to the record store way farther away than I was allowed to go), going back into their days as Graduate... all of it. Never lost my love for them over the years, sang along to those songs in the car with my dearly departed dad, took some lumps during the falling out of the 90's, rejoiced over the reunion... and finally saw them live for the first time on the Happy Ending tour. Then again in the front row at the House of Blues in Atlantic City a few years later with my new wife; a small, intimate, kick-ass show. That enough would have been a great ending to the story. But alas...

Skip ahead and I've got two school-age kids that have grown up with TFF as a huge part of their personal soundtracks as well. In 2017 I came home from work one day and told my wife "hey, I got us some tickets for the U2 Joshua Tree show" and my daughter, then 7, says "OOH, am I going?!?" I said "oh, babe... I didn't even think of that because this is an outdoor stadium show and is going to be a really long and hot day outside... but someday someone is going to ask you what your first concert was, and it's my job to make sure you've got an awesome answer for that. So, if you could see anyone live, who would it be?" And of course she blurts out, without hesitation, "TEARS FOR FEARS!"

Proudly, I said "YESSSS... the next time they tour, we are totally there." And wouldn't you know it? A day or two later their tour with Hall & Oates was announced, and I was able to grab us floor seats up in Newark, about 15 rows from the stage. So we go, my little girl with her TFF t-shirt with their faces on it (an important detail)... and of course she is by far the youngest person there (even I was on the younger side in my early 40's the the time, ha!), save two teenage girls I noticed a few rows ahead of us. When the band came on and the people around us started noticing that she knew the words to every song, getting more and more excited every time a new song started and she immediately knew it, people started really all getting into it—allowing me to put her on my shoulders, everyone around us just having a blast with her. And I'll tell you what... at the end of Head Over Heels? My daughter and I looking at each other and singing "funny how... tiiiiiiiime fliiiiiiiiiiiiies...."? The memory still crushes me. What a moment.

So the show ends, it was late for her, we were far from home and she didn't really know any H&O at the time (I know, my bad), so I decided we'd beat the crowd and head out. However, I noticed those teenage girls a few rows up had actually taken some video of my daughter and I singing, etc., and now they were climbing over the rows clearly trying to come back and talk to us. I noticed this and they kinda waved at me, so I waited for them to get to us. When they did, they started talking to my daughter: "wow, you KNOW all of these songs?!" "Yeah! I sing them with my daddy!" "Oh my gosh, that is so cool! Is this your daddy?" "Yep!" Then they pointed to her shirt. "Well, that's MY daddy right there on your shirt!"

Then they looked at me and I went "wait, what?" And she says "yeah, Curt Smith is my dad." Then to my daughter: "would you like to come backstage and meet him?" She looked up at me and said "would that be OK, daddy?" "Um, yeah, I think that'd be OK." So Curt's daughters escort us over to the side where I meet Curt's wife, and everyone was super awesome and so great with my little girl. Because my daughter was so tiny they escorted us backstage ahead of the queuing meet and greet line, let her grab some candy from craft services when her eyes almost bugged out of her head seeing the spread, and then bam - a door opens and Curt's daughters were already in there showing him the video they had taken.

He was super gracious, got right down on his knees and was talking to my daughter, who was uncharacteristically sort of bashful and shell-shocked at this point—told her how much he loved her shirt (and that he liked my Prince shirt, too - ha!), and then offered to sign her backstage pass. He then wanted to guess how to spell her name, spelled it wrong, and she got all sassy with him: "that's not how you spell it!" "OH, I'm so sorry! How do you spell it?!" =) And after all of that, I got to look him in the eye, shake his hand, and thank him for all of the music and memories over the years. It was simply perfect. Short, sweet, and sincere.

Then we were shown how to slip out the back, which we did. But this all happened so quickly right after the show and before the rest of the meet and greet (which appeared to only be with Curt) was starting, that we opened the door and walked right into Roland, who was placing his stage clothes into a flight case. He kinda looked at me like "uh oh..." but all I did was reach down to my daughter and say, "that's Mr. Roland too, if you'd also like to say hi to him", at which point he looked down and noticed her with a warm "oh hello little darling", a nice handshake for her, a smile and nod between he and I, and we were off.

It wasn't until were were up by the concession stand that my daughter sort of absorbed what we had done and how well it had gone, and she started jumping around in excitement. When I texted my wife (who had a performance of her own that night) the picture below with no explanation... all I got back was "WTF?!?!?!?!??!" 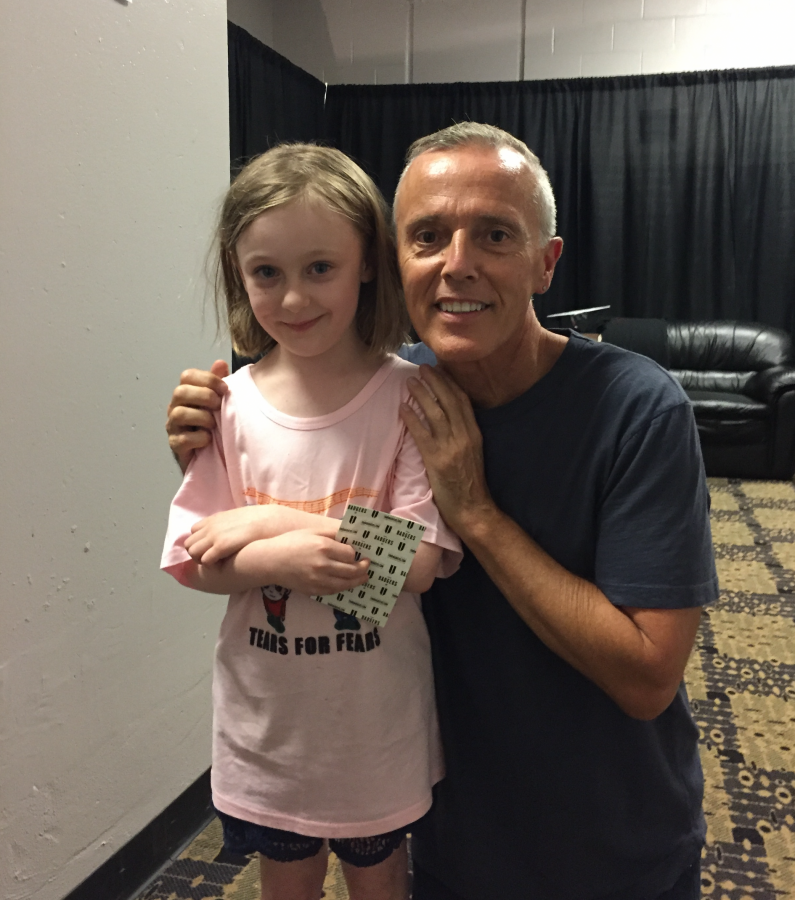 Epilogue: the next summer when my little guy was 6, we did end up taking the whole family to U2 on the Experience Tour. And he wouldn't stop asking about when HE was going to meet the band. I actually did tweet U2 with an abridged story and ask, but knew that was a hail mary.