Originally released on December 7th, 1973, and issued in quad only in Japan on Christmas day 1974 as part of JVC's line of CD-4 LPs. This was producer Norman Whitfield's final LP with the Temptations before he left Motown to start his own Whitfield Records label in 1975 where he'd do some great work with the Undisputed Truth, Rose Royce and Willie Hutch. 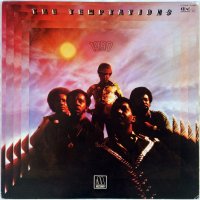 Obviously, it doesn't have a breakout hit like All Directions' Papa was a Rollin' Stone, but for me this is a much more consistent album, and has a great variety of styles, from ballads like I Need You and Heavenly to uptempo numbers like Let Your Hair Down and You've Got my Soul on Fire. But like a lot of music of this era, it's the "message" tracks that are the standouts for me. Ain't No Justice, which talks about the idea that there aren't really equal rights until black people aren't viewed with suspicion by default (something that still seems very timely today) and 1990 juxtaposes the difference in fortunes between the space race and ghetto poverty. And of course, a Whitfield/Temptations album wouldn't be complete without an extended track, which you get in the form of the slow-burning Zoom, the nearly 14-minute long lament for the problems of the time (higher taxes, drug use, etc.). The whole album's dark, disenchanted, psychedelic vibe seems perfect to me for Watergate-era America.

Apparently the Temptations often chafed at working with Whitfield, feeling like they were often supporting characters on their own albums to Whitfield's production and arrangements, and on some of the previous albums I think they definitely have a case for that, especially the one that immediately preceded this one, Masterpiece. But on 1990 I think the two sides find an almost perfect balance - I love the production and arrangements on this LP, but the vocals get, at the very least, equal exposure, and the majority of the tracks are very much features for the various lead vocalists. It's a real shame that the two parties went their separate ways after this, because Whitfield produced some fabulous stuff for the Undisputed Truth, and the Temptations basically fell off a cliff in both quality and commercial popularity shortly after this.

Like I said, I love this album, and the quad mix (even off a 40+ year old LP) is excellent - and at times very different to its stereo counterpart. Take Let Your Hair Down for example - in the stereo mix, the majority of the backing musicians drop out at the beginning of the track for an a capella vocal, whereas the quad mix has a full-band arrangement throughout. There are lots of differences like this throughout the album, but it somehow always manages to maintain, and often enhance the vibe of the original stereo mix, which I should say I stopped listening to once I got the quad version, as it's that good.

When you note that you LOVE something, that's more than enough of a recommendation for me to seek and find! Reading that you think of this as not only one of your favourite Motown quads, but one of your all-time favourites set the bar mighty high indeed.

Grabbed me right from jump street! What little hair i have left was getting down with "Let Your Hair Down"–those distinctive Temptations vocals locked front and center with funky horns percolating behind me had me grooving in the sweet spot! Kept right on flowing with the beautiful falsetto vocal and drums on "I Need You" beckoning me, rhythm guitar and horns pushing me forward from behind, keyboards making me feel like i'm floating on the groove! Dayum! "Heavenly"? Yes–indeed! Takes that smooth, belly rub groove established on track two to the next level–absolutely heavenly melding of vocals and production through the mix. "You've Got My Soul On Fire" turns the funk up with some great guitar and horn work behind and the bass holding it down while the vocals soar!

In your stellar review, you note that "the two sides"–artists and producer (Temptations and Whitfield)–"find an almost perfect balance." The same could be said for the two sides of the Japanese CD-4: side two is where, for me as well, the album really takes off. I'm taking some liberties here, but for me, side 2 "starts" with the last track of side one; I say this because "Ain't No Justice" is the beginning of what you label the "message" tracks. Holy Sh*t! This track resonates just as powerfully in 2021 as it did in 1974 and prophesied it would in 1990. And this is where Whitfield's production really takes this release to the next level! The discrete elements all around create a foreboding and poignant soundscape that takes the apocalyptic feel and drives it to my very core. And "1990" just ups the ante (it was your POST of the youtube video of the track that reminded me i coveted this release). Again, the prescience of the lyrics are eerie and disturbing, and again, the production continues to elevate and makes the sum of the parts so much greater than the hole the song describes! And just when i didn't think it could get any better or more profound . . . "Zoom"! I can't say it any better than you already have: "a Whitfield/Temptations album wouldn't be complete without an extended track, which you get in the form of the slow-burning Zoom, the nearly 14-minute long lament for the problems of the time (higher taxes, drug use, etc.). The whole album's dark, disenchanted, psychedelic vibe seems perfect to me for Watergate-era America." But seriously, comrades, you've gotta experience the amazing slow-build from the disparate cacophony of commentary to the trippy soul-psychedelic script-flip of the vocal harmonies zooming Us higher and higher than ever before from the dystopia of the earthly situation to stratospheric possibilities realized in Whitfield's celestial production! Mind. Mos. Def. Blown.

Again, you nailed it when you noted "it's that good." Not only is this a 10, ima listen again . . . zoom, zoom, zoom, zoom, zoom, zoom--zoom, zoom, zoom . . . higher, higher than ever before! The rap is outta sight! A taste of space!
Last edited: Jan 11, 2021
You must log in or register to reply here.
Share:
Facebook Twitter Reddit Pinterest Tumblr WhatsApp Email Link