Third Man Records, Sony Music, and Ode Records are proving that it's never too late, baby, with the audio and video premiere release of Carole King - Home Again, a live concert recorded in Central Park on May 26, 1973. Home Again will be exclusively released on 2-LP vinyl and DVD as part of Third Man's ongoing Vault Series (#51 in the series). Sign-up to subscribe to the Vault Series and receive this title is open through January 31 at Midnight (Central Time).

King took the stage of Central Park's Great Lawn as part of a twelve-city tour in support of her fifth studio album, Fantasy, which would be released just weeks later in June. The New York Times acknowledged the significance of the event which drew massive crowds (numbering "well over 70,000" per the Times but over 100,000 in other reports): "For the Brooklyn-born Miss King, whose Tapestry is the biggest-selling rock album in history, it was a special kind of homecoming, her first and only New York appearance in two years." Mayor John Lindsay introduced her, and Joni Mitchell, Faye Dunaway, and Jack Nicholson were among the adoring fans in the audience. Nicholson quipped, "This and the Ellsberg trial are the only two events it's proper to be seen at in public." King's mother was also in attendance. Woodstock's Chip Monck was in charge of the show's technical aspects (and once again, had to admonish fans to stop climbing the lighting towers) and King's longtime producer-collaborator Lou Adler produced the concert audio.

King opened the show with a solo set before welcoming her 11-piece band (clad in customized St. Louis Blues hockey jerseys, noted by Adler as "cheaper than suits!") onstage. The roughly 75-minute set encompassed half of Tapestry ("Beautiful," "Way Over Yonder," "Home Again," "Smackwater Jack," "It's Too Late," "You've Got a Friend") plus already-beloved tunes from its follow-ups, Music ("Sweet Seasons") and Rhymes and Reasons ("Been to Canaan") before launching into an only slightly abbreviated version of the entire Fantasy album, in sequence. "New York has given me such an awful lot -- stimulus, ideas, feelings to write -- that the concert is just a small way of giving something back to it," King commented at the time. Now, the performance is finally getting a wider airing. Though nearly nine minutes of concert footage appeared on July 1, 1973 in a segment of ABC's Good Night America anchored by Geraldo Rivera, the full show has never been released until now.

Third Man's Vault Package includes two LPs on brick-colored vinyl, with three sides of music and one side dedicated to a graphic etching of the Fantasy tour logo. The gatefold jacket and printed inner sleeves feature photos from the concert. The professionally-filmed performance premieres in its entirety on DVD under the auspices of the music documentary specialists at The Coda Collection. The set also includes a green vinyl 7-inch single from singer-songwriter Lucy Dacus featuring covers of "Home Again" and "It's Too Late," both of which were performed by King in Central Park. Dacus' recordings were made specifically for this set.

King fans can also tune in to CNN now for director Frank Marshall's new documentary Just Call Out My Name, chronicling the musical partnership between Carole King and James Taylor, to whom she dedicated "You've Got a Friend" in Central Park. Those interested in Home Again can sign up for the Third Man Vault Series now through midnight CT on January 31. You'll find the Vault Series link and track listing below! 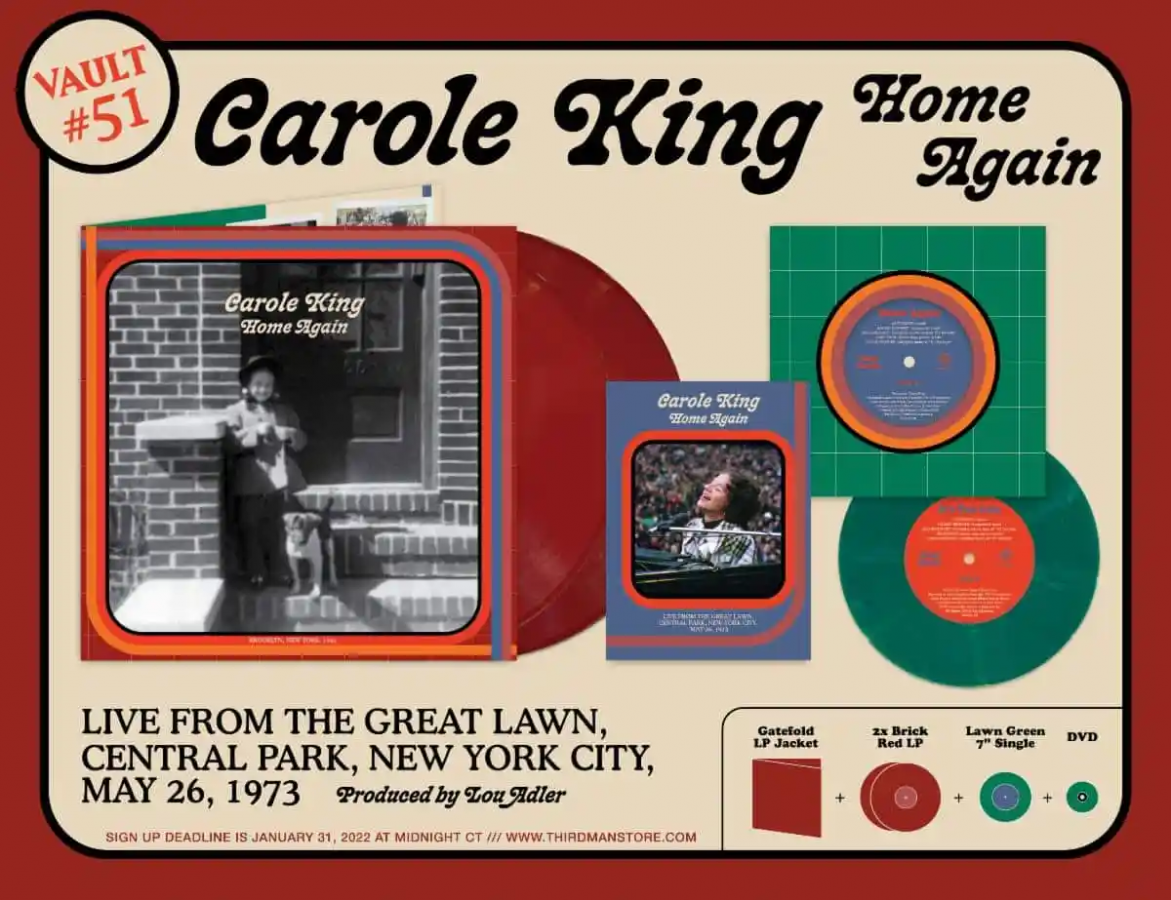