Please post your thoughts and comments about this new 5.1 release from the Ray Thomas Box Set. Below are scans from my autographed copy.

Despite our hopes, wishes and dreams, the surround mix is 5.1 Dolby Digital only, while the "bonus" Promo Video of "High Above My Head" is in stereo only. 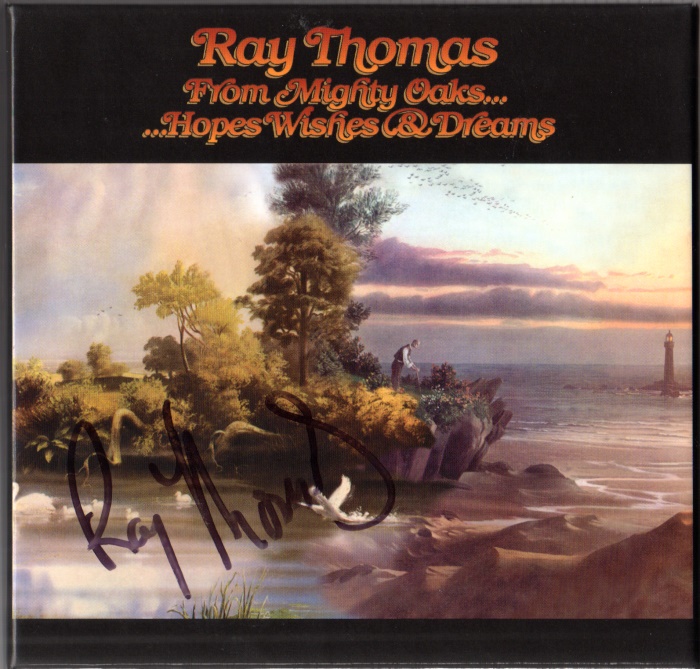 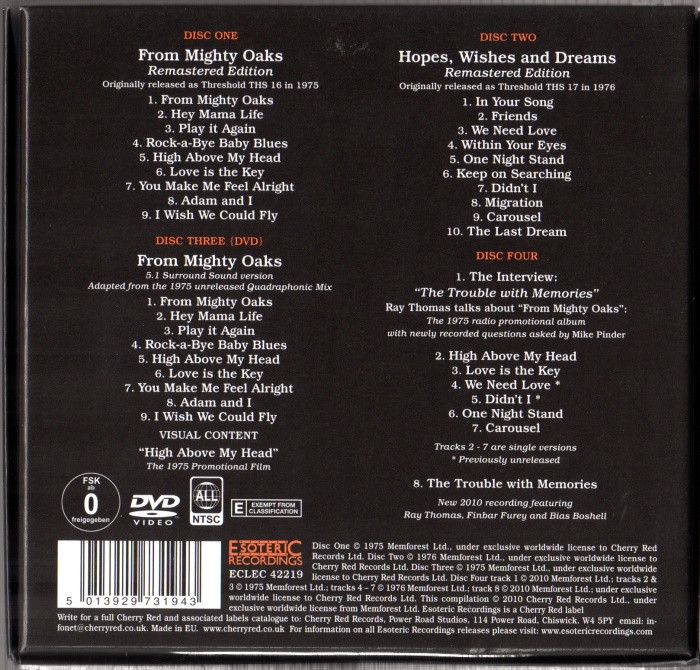 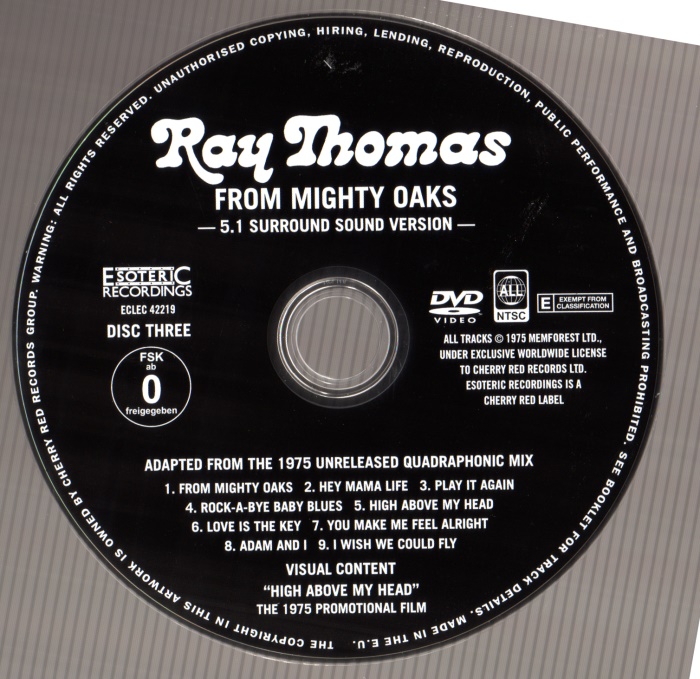 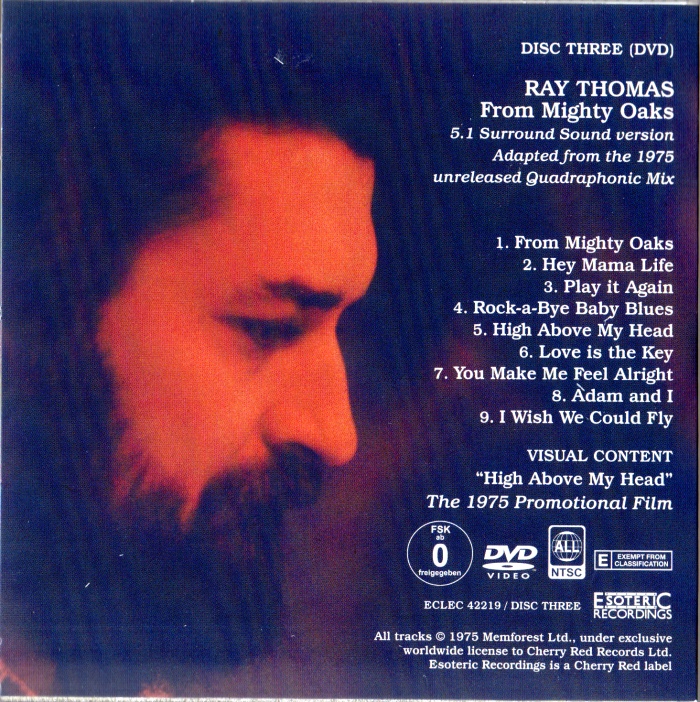 Waiting for mine to come in....

I also received an autographed copy mailed directly from Thresold (beating the US release.) I have to admit that I wasn't very familar with Ray's solo stuff and really like it. Although the surround mix of Mighty Oaks sounds good (not great), I couldn't locate anywhere on the disc or packaging exactly how this disc is mastered. Also, there was implication in the booklet that the 'Hopes' disc also once had a quad mix...... Overall, a very fun package!

I have been listening to this box set for a few weeks. The DD surround mix sounds good, but would have sounded so much better in dts. I missed out on the Red Book CD's when they were originally released and I must say they are worth the price of the set on their own. I score this one a 8, taking away a point for not being dts. A welcomed addition to my collection. Thank you Ray for making it happen.

Seems like after a big build-up leading to it's release, there wasn't much activity here in the poll thread.

The album "From Mighty Oaks" was never a hit in the US, mostly an impulse purchase by big fans of the Moody Blues. I was one who purchased it back in the day, I think in fact when it hit the cutouts. After listening to the LP, it grew on me, especially Side One. It really does sound like a Moody Blues album.

As for the LP being a "secret QS" release, I guess we can finally put that old rumor to rest. It's clearly a stereo only release, and probably the only reason the rumor started was because the title was in fact created with a quadraphonic mix. Why the BlueJays album made it out on Q8 and Q4 and not "From Mighty Oaks" probably had to do with initial sales.

So, back to this release. If you like the album, you'll love this box set. The alleged "5.1 mix" is really just the quadraphonic mix with some reverb or clone track at a very low volume in the Center and LFE tracks. You can see by looking at the 5.1 wav file below what I mean. You could mute the center and sub and have a fine listen. In fact, that's just what I did when I made a DVD-A for the car from this disc.

As for a vote, I would give it an 8. It's a good surround mix, vintage style. The music is good, and the source, unfortunately, is Dolby Digital. That drags it down a notch or two.

If you like the Moody Blues or are a fan of Ray Thomas, grab this one while you can still get it. It's worthy. 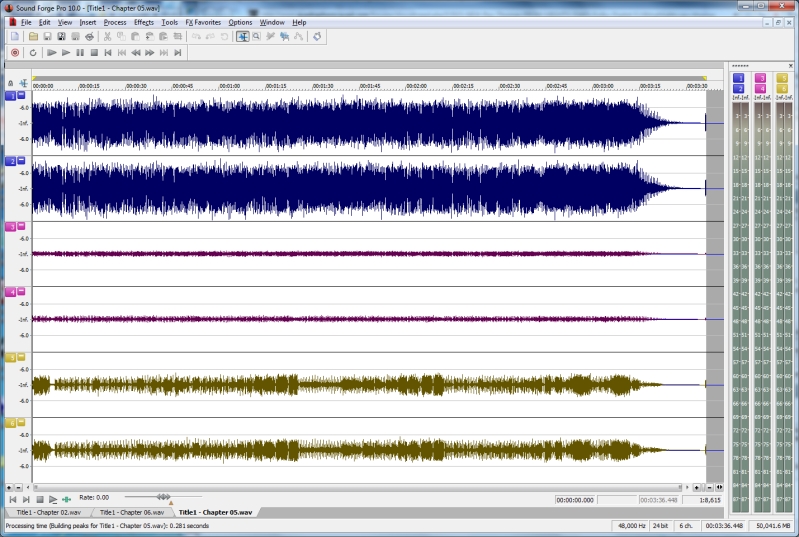 It IS a good record! Really! I had it for years as I am a big Moodys fan and got all of the solo stuff as well. I give it an 8 1/2.
Minus one for no DTS... when the hell are they gonna get off the Dolby, for cryin out loud?? Or at least add a DTS track!
And, Hopes, Wishes & Dreams is a stereo CD. Maybe even a stereo LCPM DVD would have been nice.

(I had mine autographed to me so I know I won't sell it! )

BTW - for some reason it does decode nicely in QS even though it isn't.
but then again, so does McCartney's Ram album.

I meant to nab one of these, are they all gone?

timbre4 said:
I meant to nab one of these, are they all gone?
Click to expand...

It appear I ahve one of teh rare unsigned ones

Great album very good music even my wife like it!!! Vintage sounding mix which i believe it is.

losses point fr the use of only Dulby Digital. otherwis great to have in teh collection and shame its only a limited release.

OMG! I had no idea this existed. Need to get one. Eight years ago, while staning in line for Moody Blues and Simon & Garfunkle tix, a Moodies fan told me that Ray is very artritic and in poor health. Anyone care to comment?

I really like the orchestral arrangements in this one....its done well.....never having heard this before I wasn't expecting it (Although it sort of makes sense after Days of Future Passed) ....pity about being Dullby...

Linda
Ray was taking a drug for stagefright for many years that caused nerve damage. Did not help that with that he was a smoker. Also had knee damage from skidding out on stage in very early days. Nice fellow, tried to stay out of the limelight. What a voice. Bad choice to trust a drug for that long with zero history. Just scary, These pharmaceutical companies now own the corporate airwaves. They experiment on us. They are in cahoots with the Docs, never to explain how nutrition is the key and supplements can save your life. I know, i am one of them that is surviving because of supplements. I have a heart problem that becomes intolerable without them, yet not one doc has prescribed any of them. They might ask what you take, but with everyone scared to death of saying anything wrong to insurance companies, no one says the truth. Docs do not get real information. Sure miss Ray. Last time i saw him was an outdoor gig here in town, beautiful summer eve, and they let us down right in front in those days. He was close to the date he said he was gonna quit, and he seemed quite joyous. I think he knew and was not telling even the other guys in the band. Just tired of Justin. There are some wonderful videos on you tube i think, with Ray and Pinder together a few years ago getting this boxset together. If you are a fan, they are quite interesting.

Quad Linda said:
OMG! I had no idea this existed. Need to get one. Eight years ago, while staning in line for Moody Blues and Simon & Garfunkle tix, a Moodies fan told me that Ray is very artritic and in poor health. Anyone care to comment?

I saw the Moodies at the Chicago Theater a couple years ago. It was a great show, though I miss Ray. Sadly, I had tickets a few months later at the Genesee Theater in Waukegan. My then spouse would up getting invited to a Blackjack Tournament in Vegas at the same time. So, a girlfriend went in my place. Instead of seeing the Moodies again, I wound up seeing Elton's Red Piano and the Beatles' Love.

Thanks for setting the record straight! I can relate to what nerve damage is like. I've had inflammed nerves in my right leg for 5 five months. I'm on medications for it. It is getting better, but it's a slow road back. It's a hereditary thing. The reason I've spent so much time on QQ lately.

I've heard he also had balance problems to go with it...

So, it's a Question of Balance?


Bob Squires Jr said:
I've heard he also had balance problems to go with it...
Click to expand...

Caused by the LEGAL drugs
good god sheeple, we need to start standing up and kicking ass. There was a very interesting bit about cancer and the Hoxsey cures for cancer on coast to coast last night. Not everything needs radiation and chemicals.

Bob Squires Jr said:
I've heard he also had balance problems to go with it...
Click to expand...

I am a big fan of the Moodies and I have especially liked Ray's material, but I cannot "go" either of the two cds in this box set.

That being said, the mixes are good and they sound great.

I hope Ray keeps his fingers in the music business. I also hope for a full Moodies reunion someday.

Hank, that is a wish for many folks, but it will never happen. They had a chance a while back when Ray was still playing to do that, and several in the band rejected it. Graeme tells a story about how during one session as he approached Mike about something, Mike turned and paraphrasing said, I am in the moment working on this song, your just the drummer, what do you want? So, A full reunion will never happen, and Ray is retired. But John and Justin will go till they can't lift the guitar. Blue Jays will be the next act if Graeme has a heart attack. The Moodies have become one of the longest Rock and Roll acts in history.

Hank said:
I am a big fan of the Moodies and I have especially liked Ray's material, but I cannot "go" either of the two cds in this box set.

That being said, the mixes are good and they sound great.

I hope Ray keeps his fingers in the music business. I also hope for a full Moodies reunion someday.
Click to expand...