Please post your thoughts and comments on this 1978 RCA CD-4 and tape release of Tomita - Kosmos, featuring the theme from the movie "Star Wars".

This was the last U.S. specific CD-4 album released by RCA, 2 years after their previous CD-4 release which was oddly enough Tomita's Planets album. The fact that a quadradisc from RCA appeared in 1978 was a huge surprise and created much buzz in the small quad community at the time. It probably was a move to cash in on the then current Star Wars craze sweeping the nation.

You can see below that although the album jacket had the ARD1 printed in the album graphics, the quadradisc logo and blurb were added via a sticker, almost like someone forgot to put it in the graphic.

Although two more Tomita albums would be sold in the US and issued US pressing numbers, these were actually Japanese stock albums with US stickers attached to them. The Bremuda Triangle and Bolero CD-4s were sold in very limited numbers with a very small distribution.

Kosmos was in fact the last full US CD-4 release from RCA, a company once known for single issue quadradiscs just a few short years before. 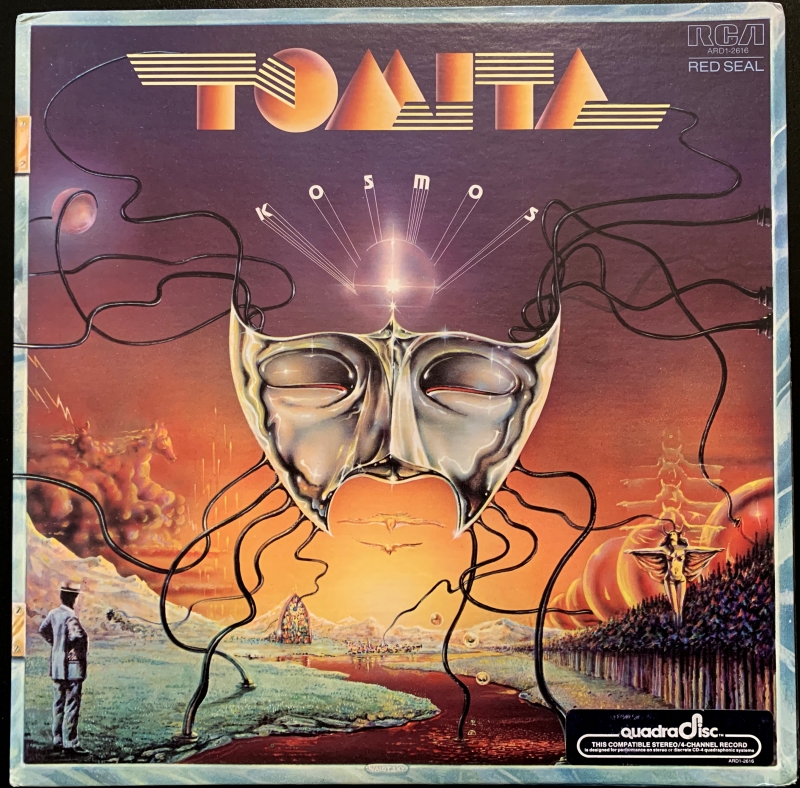 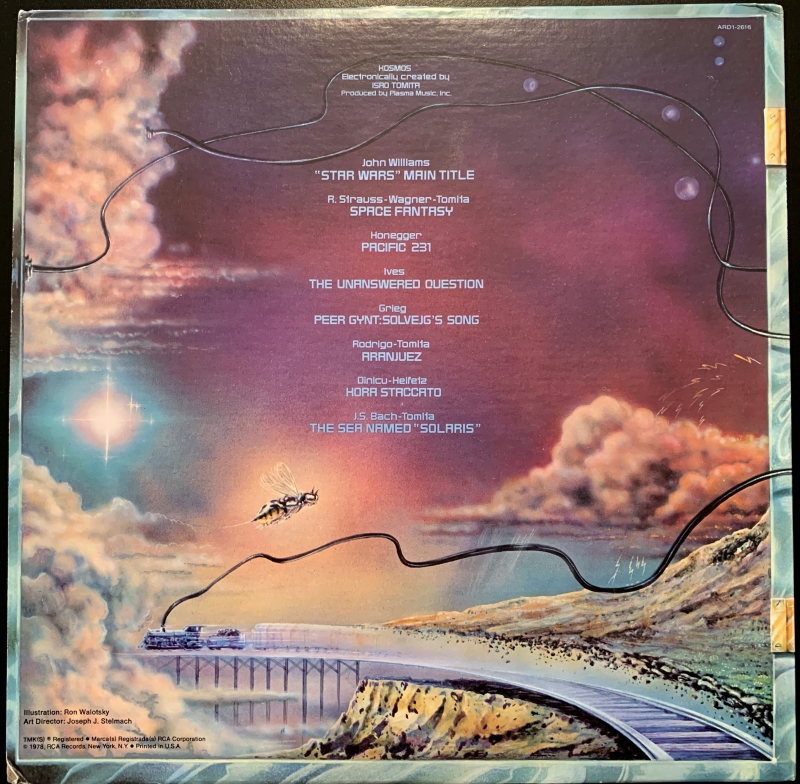 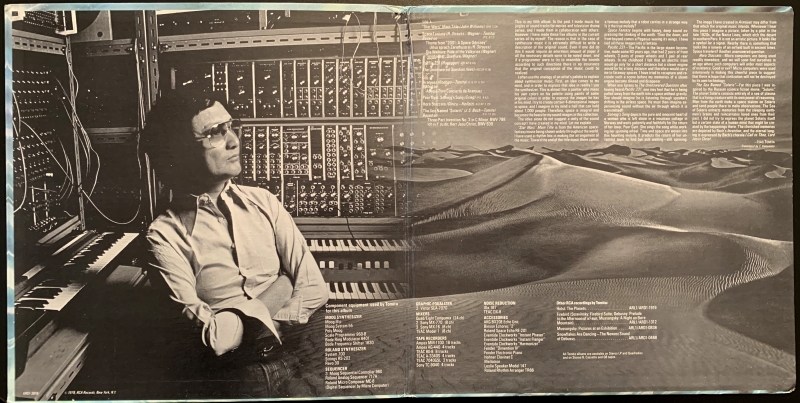 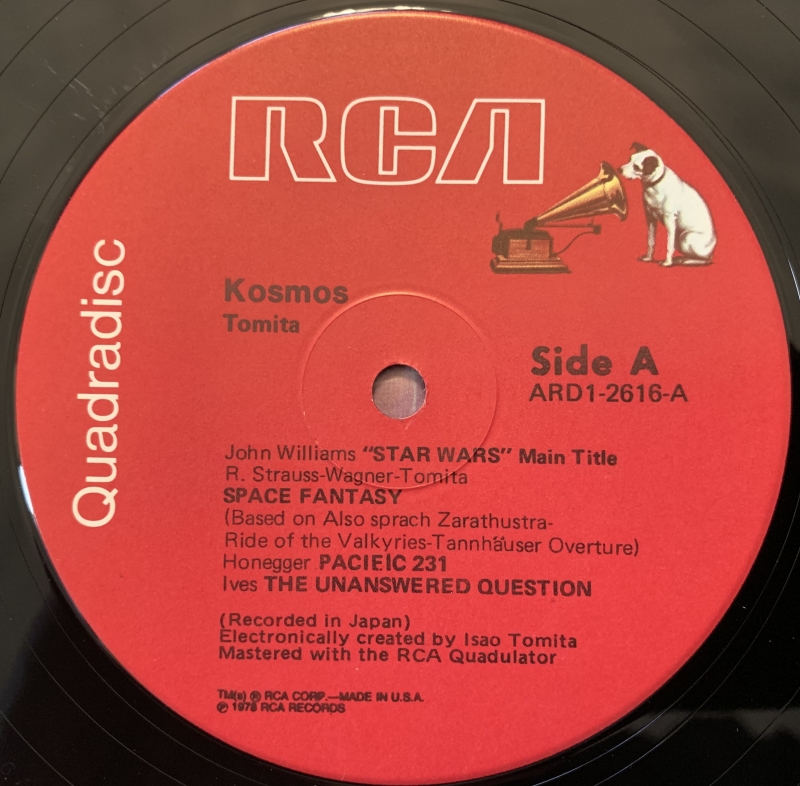 Also as Quad Reel, extremely rare, but present. IIRC it was a Reel Society issue, with a typewriter-printed label.

I was going to add a QR designation, but I'm still uncertain as to its source. The Reel Society version I assumed was stereo, going by the label info. A Japan reel seemed more likely, but I need confirmation of the source before adding it.

Musically, this is a highly fun quad title, with the usual smart, exceptional sound placements and gimmicky but endearing touches. My faves: "Space Fantasy," a medley of three famous pieces which is gloriously brash and excessive; Jascha Heifetz' "Hora Staccato" is amazing, what with Tomita-San's clever mimicking of violins; and "The Sea Named Solaris," a wonderful mood piece that echoed the elements and style that made SNOWFLAKES great (a portion of this one was used by Carl Sagan for his COSMOS TV series. It doesn't get more fitting than that!)

This isn't a perfect album. The opening Star Wars theme is done well but seemed a commercial move; other passages from John Williams' score were more appropriate for being "Tomita-ized" than this obvious choice. And while Ives' "The Unanswered Question" is given a good treatment, the sound here lacks the subtle shadings someone like Leonard Bernstein brought to the piece (seek out his DGG Ives album for proof). It's still damn fine, though.

Trust me, i have photos of the qr release of Kosmos somewhere... just don't ask me to find it now!
And, afaik, no qr or q8 of Tomita ever surfaced from Japan.

The "Q4 Quad" designation is found only on the binding. Here's the images:

Aranjuez is the one gem on this album. I would even say it is sublime. The rest of the tracks have their moments, but are inconsistent IMO. The Aranjuez Concerto has always been a favorite of mine; so maybe I'm biased. The Peer Gynt is also good.

This is my 3rd favorite Tomita quad. Very good quad mix and arrangements, the songs just weren't quite as good as Pictures or Planets to me. Overall quite enjoyable . I vote 8.

10. I love it! I bought this one several different times as the versions were released: US CD-4, Japan CD and US Dolby Surround

Anyone with more info on this digital release?

www.discogs.com
Does it have anything to do with the old quad?

i have it but don't remember a thing about it sorry, i will check it at the weekend.

It was released again on SACD as 'Space Fantasy'. Might be slightly different in sequence but it's the old Kosmos mix I think...

The second disc doesn't have a surround mix unfortunately...

View credits, reviews, tracks and shop for the 2015 SACD release of "Space Fantasy" on Discogs.

The rear are summed to mono and encoded in Dolby Surround.

Tomita SACD (and their quadraphonic sources)

I'm going back to my old synth hero Tomita on the SACD format and, bugged by old memories of "the right sequencing", i cross-checked the quad and the sacd releases. So far, Clair de Lune, Ultimate edition: resequence the Snowflakes album and add some extra tracks; shuffling the sacd for the...
www.quadraphonicquad.com
You must log in or register to reply here.
Share:
Facebook Twitter Reddit Pinterest Tumblr WhatsApp Email Link