The Blu-Ray is currently out of stock, but Marillion's website are accepting more orders which will be available at the end of March: The Absolute Universe

Really great video to go along with the music.

The music, well it's an hour 37 minutes and that's a lot to take in. It will take a while to digest everything before voting.

I set the bar low on the surround mix and either it's the 8.0abv India Pale Ale's or the mix is much better than anticipated. I did bump up the rears 2db and employed the (ATMOS) Neural:X upmixer which works nicely on this title. 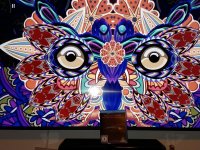 An easy 10 for the best supergroup i’ve ever heard, it may not be their best album but it must be hard to maintain perfection all the time, over 90 minutes of sheer brilliance and the accompanying visuals are well worth watching since there’s no lyrics to read (the only negative), i extracted the tracks for my phone and it seems to have 20 tracks instead of 19! I think makemkv may have split a quiet bit in a song and treated it as an extra song, havent listened on my phone yet to see what happens

I’ve been a fan from the first album but this is the Ultimate Transatlantic experience IMO! The surround and the visualiser are an extremely impressive presentation of the album.

Loved the visualizer. The mix to me is a 9, it could've been taken a higher discreet aproach, but it's quite enjoyable

Ultimately (pun) went with an "8" here. This is really good and worth checking out if you like prog rock.
Life in Surround Review

The visualizer is a nice feature although I do not think I would watch it more than once. At over 90 minutes of one continuous mix (there are 20 indexed songs but they are all connected via various segues), its a bit of a chore to get through this. Instrumental prowess aside, the songs are a bit of a prog stew and after awhile they begin to sound a bit generic. The fidelity and 5.1 mix are good not great - still, overall a good package. 8

Got my copy today.
This is one terrific Prog Rock release.
A lot of effort has gone into the making of it and I think it's bloomin brilliant ...

The mix is not quite up there with the very best but overall, a well earned 9 is given to this superb, rockers delight.

Update
I have played this most of the afternoon....twice!!.
Once with DTS the other LPCM .

This is my first experience with Transatlantic. While I recognize most of the members, I don't have much experience with most of them either. In descending familiarity it would be Portnoy, followed closely my Trewavas then Morse a ways down and Stolt, none.

I was interested based on forum interest but wasn't going to buy the deluxe set. When they decided to release the stand alone blu-ray, I decided to buy it to show my support for that decision.

My one experience with Morse is "Snow". His voice and some of his melodies are quite evident from that little experience. The rest of the band is great, but I am not familiar enough to say that any line was a typical motif of theirs. I really like Roine Stolt's guitar an may look into the Flower Kings.

Overall, I like that album, but found a few of the songs too religious for my tastes. I like what they attempted here with three different versions. IMO the best version is The Breath of Life. I wish the Blu-Ray allowed you to listen to the album as either Breath of Life, Forevermore or Ultimate.

The sound quality was excellent to me on my system definitely a 3. The mix was not impressive at all, I think this is my first Rich Mouser mix and don't know if this is representative of his work. Hopefully he isn't doing LTE3. rate the mix a 1. Musically this is very noodly prog and is too long in the ultimate version, 2.

While I would have liked a booklet with the blu-ray, it was obviously an afterthought and from the pic of the deluxe edition, normal blu-ray packing was not part of the original idea. I liked the on screen video and that there is a stand alone Blu-ray, 1

Ge Someone said:
The surround is a somewhat discreet mix,
Click to expand...

Discreet, as in cautious and conservative? Or discrete? Just checking!

The surround is discrete but conservative with vocals and keys in rears, but as Ge Someone said, you have to raise the level to enjoy.
M

Ge Someone said:
This is the progressive rock supergroup. I like the music anyway.
The surround is a somewhat discreet mix, but I noticed that the level of the rears was always rather low. As did weekendtoy, I raised the level of the rears for the last 30 minutes and I found it to be much more enjoyable, from the surround point of view. You might give that a try.
Click to expand...

Without a doubt, they are quite a super( )group. My personal favorite would be OSI, another Portnoy project originally. Unfortunately no surround that I am aware of. If it was't such a hassle with my old receive, it does not send the menu choices though the HDMI, I might try adjusting the levels. The bigger thing for me is there is just too much of it.

Let me choose Breath of Life. While recovering from knee surgery over the past month, it has been a go to listen on my phone. 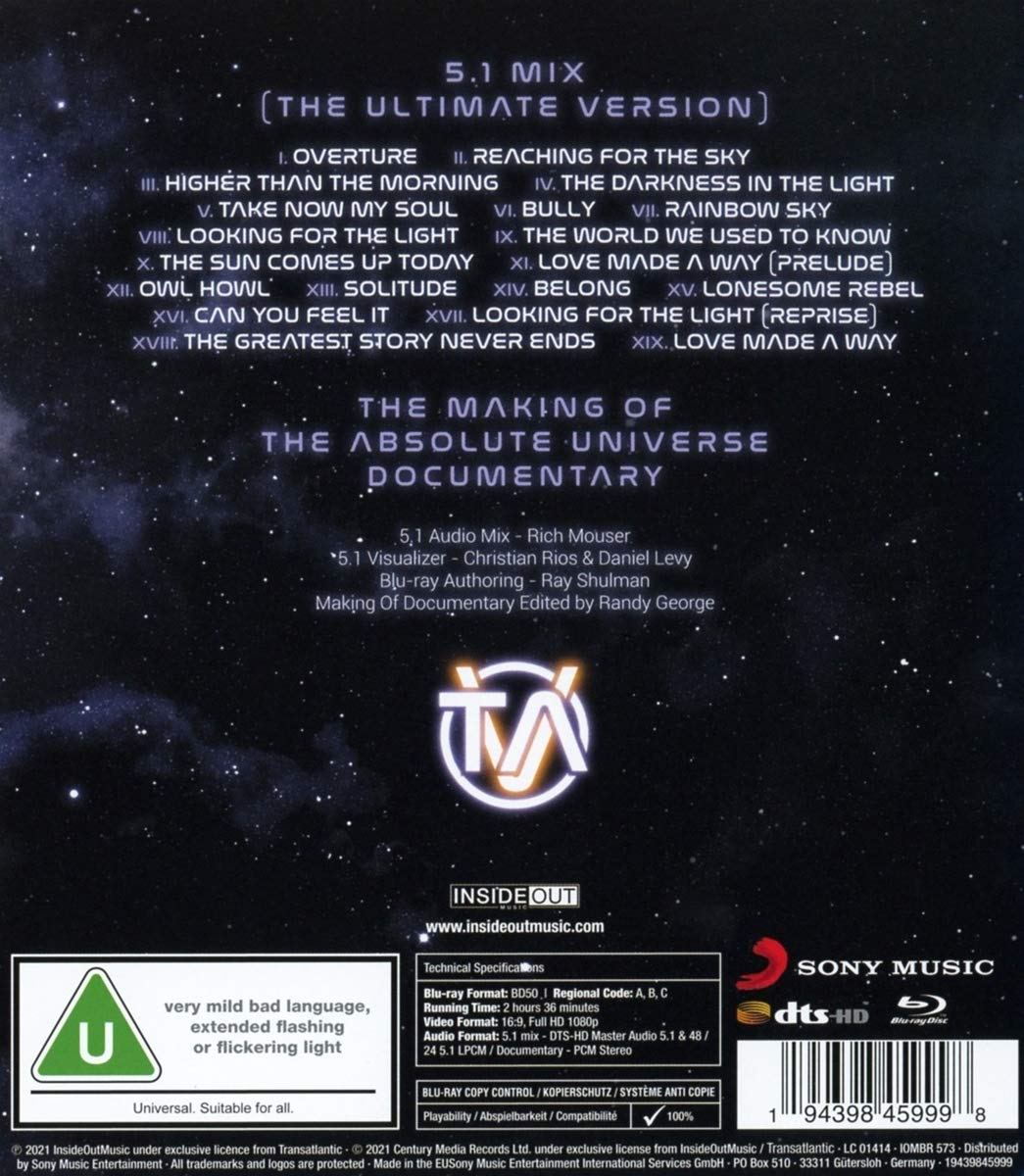 I bought my blu-ray stand-alone version from Racket - I've bought Marillion albums and live stuff from there and like to support them directly whenever possible. Happy that the 'making of' video was included, because unfortunately that was the only video I could see. It seems that I'm having bad luck with my OPPO BDP 83 of late...Ray Shulman's blu-ray authoring isn't properly compatible with it.

Firstly the Chris Squire 'Fish out of Water' blu-ray doesn't make it past the Esoteric Records banner, but when I finally got to hear it (having had someone rip the tracks to a disc I could play) the disappointment with the mix was so great that I've just had to put it behind me. Experiencing one of my all-time favourite albums horribly and ineptly mixed and ineptly authored is absolutely not what this wonderful music deserved.

At least the Transatlantic album plays in 5.1. I'm still discovering this - it's an epic in every sense - but so far Rich Mouser seems to have done a pretty good job. Not having access to the visuals isn't a deal-breaker but it would have been nice...

My Steven Wilson 'Future Bites' blu-ray didn't play any video content either. Not sure who authored that - it was mastered by Bob Ludwig but I'm pretty certain that the authoring would have been delegated to someone else in his organisation.

I'm guessing that my Oppo is somehow becoming old technology at this point, but at the moment I'm going to hang onto it because the few discs that fail to play properly are a very small fraction indeed of my collection and I'm otherwise very happy indeed with the way it sounds and looks. Another way of looking at this, however, is that whatever so-called quality control is being done isn't adequate and the authoring folks haven't spread the net widely enough for play-testers. I'd be happy to be involved....

Sorry to have taken this thread slightly off-topic. M
E

My thoughts:
I realize this is a prog rock supergroup, but I'm only really familiar with Marillion.
Anyway, first, the music is very good but the album is too long for my personal taste. I'd have liked to have had the option of selecting either the "Breath of Life," "Forevermore," or "Ultimate" version on the menu--I'd think this shouldn't have been too difficult to incorporate in the Blu-ray format, but what do I know.

The visuals are wonderful though. I really enjoy it when an audio Blu-ray gives us visuals--or video clips, if you like--and I'm impressed with the quality of some of these (see also: Devin Townsend's "Empath"). I guess CG really isn't very expensive anymore these days.

I like the fact that all members have their moment of lead vocal to shine.

The surround mix is fine and serviceable but nothing spectacular. Very enjoyable though.

Anyone who enjoys prog or rock in high def 5.1 should give this disc a try.

The DTS-HD Master audio is so crystal clear I can push the volume well above comfortable listening levels.
I like the way the surrounds are used on this. Although they are constantly present, I hear very little sound moving behind me. Instead, they work with the fronts to create a super enhanced wrap around stereo sound that not only has the sound moving all the way from right to left but adds depth by pulling the instruments into the room. There are some quieter moments when the keys gently move a little deeper into the surrounds and a couple of times when vocals appear to be coming from all around.
At least that's what I hear on my system.

Nothing fancy with the package and I'm fine with that.
The disc comes with a full length documentary, amazing sound and great visuals.

I think it's fantastic that these guys not only gave us a great album to enjoy, but went the extra mile to give it to us in HD 5.1. I dont know what else I could ask for. This gets a 10 from me.

I voted 9. I was able to hear the 5.1 mix prior but I started reading and seeing the reviews about the music and video combination and I wanted the same experience as others. I ordered the second wave Blu Ray and was impressed.
5.1 Blu Ray offers three choices, 24/48 LPCM Stereo, 5.1 DTS-HD MSTR & 5.1 LPCM 24/48.
I only listened to the 5.1 DTS-HD MSTR, this is always my choice as I really like the deep full sound of dts-hd mstr.
As others have said a very long listen and if not for the video I am sure my mind would have wandered and I would have lost interest.
Making Of Documentary: I actually enjoyed this, maybe even a little better than the music/video. Cool to see Mike Portnoy on a relatively small kit, compared to his Dream Theater days. Interesting to know this band is on it's 20th year and 5th album.

A dedicated Prog Rock fan is going to vote 10 all day long. I think my vote of 9 could even go to an 8 but I remain undecided between 8-9 so I picked the higher. The sonic quality, the surround, the video/s all top notch, just not in love with the Prog Rock thing.