What's the Latest DSD Download in Your Collection - Multichannel, Stereo or Mono?

The latest Super Artists in Super Audio sampler from Channel Classics - Volume 8 in the series. This one has 16 tracks and 80 minutes of music from a number of the label's top artists. 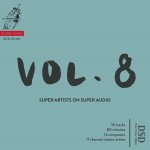 That is a good one in Stereo DSD. Enjoy!

How's this compare to the DCC gold CD?

Elvis DCC would be pretty hard to beat. It is so realistic sounding, detailed and smooth.

I am only buying DSD I don't own on SACD. Yesterday bought Billy Squier-DSN & EIM, J. Geils-Freeze Frame and Alan Parsons Project-Turn of a Friendly Card.

All sound great. Original Freeze Frame cd stood up to the DSD very well. Billy Squier there is very noticeable improvement and Alan Parsons sounds great, but again cd stood up well, but there was more detail in backing vocals that were very clear. All sounded warmer than the cds with more punch,bass and of course more detail.

bru87tr said:
Elvis DCC would be pretty hard to beat. It is so realistic sounding, detailed and smooth.

I am only buying DSD I don't own on SACD. Yesterday bought Billy Squier-DSN & EIM, J. Geils-Freeze Frame and Alan Parsons Project-Turn of a Friendly Card.

All sound great. Original Freeze Frame cd stood up to the DSD very well. Billy Squier there is very noticeable improvement and Alan Parsons sounds great, but again cd stood up well, but there was more detail in backing vocals that were very clear. All sounded warmer than the cds with more punch,bass and of course more detail.
Click to expand...

Oh man...I was debating the Billy Squire when it was released..but figured it sounded average.

bru87tr said:
Elvis DCC would be pretty hard to beat. It is so realistic sounding, detailed and smooth.
Click to expand...

GOS said:
Oh man...I was debating the Billy Squire when it was released..but figured it sounded average.
Click to expand...

It still suffers from tinny/bright/thin top end, But everything else was improved.

BS vocals are very spacious and surround you.

They are definitely not as thin sounding as the cds. When I first listened I said, oh no (did I waste my money?). Then I compared them to the actual cd, I realized it is much improved over the cd.

I knew the cds aren't the best sounding, but liking these albums so much I figured it is worth a shot they might be better cause the cds are nothing to write home about.

bru87tr said:
I am only buying DSD I don't own on SACD. Yesterday bought Billy Squier-DSN & EIM, J. Geils-Freeze Frame and Alan Parsons Project-Turn of a Friendly Card.
Click to expand...

One more thing on the Alan Parsons Project.

If you like Parsons, be sure to get the "I Robot" Stereo DSD Download from Acoustic Sounds.
Excellent album and sound quality in DSD Stereo, not available on SACD.

bmoura said:
One more thing on the Alan Parsons Project.

If you like Parsons, be sure to get the "I Robot" Stereo DSD Download from Acoustic Sounds.
Excellent album and sound quality in DSD Stereo, not available on SACD.

FIM's Winston Ma tells the album's story: "Over the years, I have often listened to the recordings of Madam Hui Fen Min, the legendary erhu maestro. However, I have never had the fortune of meeting her in person until now.

I have found out why Madam Min's performances are so arresting. Apart from having superb artistry in erhu playing and exquisite interpretation of the music she performs, she plays with her whole heart and portrays the soul of the music. The audience is often so captivated that her music remains engraved in their mind for a long, long time. Renowned conductor Seiji Ozawa once admiringly said that Madam Min's music and feelings still lingered on even after she stopped playing.

I still vividly remember the scene very clearly during the recording of "River of Sorrow". From the control room window, I could see Madam Min, with her eyes closed, deeply amalgamated with the music and her instrument. It seemed the three components had become one. The recording team consisting of American and Canadian engineers got mesmerized, stopped doing what they were doing and unanimously stood up and listened intently. When Madam Min finished, the team still kept reverently silent until she came in to listen to the playback. All members clapped their hands and gave her an eye salute.

Two weeks later when I met Gus Skinas, Sony SACD Technical Support Director, he confided that for the past 10 days or so, he dreamt of Madam Min's playing every night and her music continually echoed in his mind. This is an experience he has never had before.

I hope you will enjoy this album and that the music, as recorded, will always continually resound in your mind!"
Click to expand...

bmoura said:
That is a good one in Stereo DSD. Enjoy!
Click to expand...

So you've bought this one then? How does it sound compared to the DCC gold CD?

Forbidden Fruit by Tois. Originally released on Stereo CD, now available as a Stereo DSD Download from the original DSD recording.
Not available on SACD.

"Tois brings us Jazz performances of several standards including The Summer Knows (Theme from Summer of '42) by Michel Legrand Official, 'S Wonderful by George Gershwin, What is This Thing Called Love? by Cole Porter, I Got It Bad and That Ain't Good and Caravan by Duke Ellington and several more. Originally recorded in PCM for release on CD in 1998, the sessions were also recorded in DSD and are now available for download in DSD Stereo. It is not available on SACD.

The album is described as featuring "the influences of Miles Davis and Art Blakey - Blue Note Records, but looking further the complexity of a written score with the fluidity of classic jazz is pure Gil Evans. These cats know where they're going. Each line is filled with detail, no off-course riffing that changes the musical direction, only contextual splicing within the phrase."

SoundStage! Network says "This is a superb introduction to a swinging European combo to watch out for. Less overtly hot than current American playing but in the pocket nonetheless, these are players with something to say -- and recorded by a label to keep an eye on."
Click to expand...

"Channel Classics Records recently celebrated their 25th Anniversary with a new album: 25 Takes from 25 Years of Recording. This album has 25 of the favorite recordings of label founder and recording engineer Jared Sacks made over this period. Native DSD Music is now offering a DSD edition of this sampler in Stereo ($9.33) and Multichannel DSD ($10.27) or both with the specially priced COMBI deal ($14.01). 25 Takes from 25 Years is a DSD Exclusive, Never Available on SACD.

Jared Sacks tells us "Channel Classics was awarded ‘label of the year 2015’ by Gramophone on September 17th. Channel is celebrating 25 years of working with the best musicians!

I selected 25 recordings that we released over the past 25 years to offer you for a very special price. To top it off we put together a sampler with 25 tracks I picked because of a special memory I have of the recording session, an artist I am really fond of or a composer I discovered.

Since Channel Classics only recorded in DSD since the year 2000, for this DSD edition of the album, some tracks have been replaced by a different piece, by the same artist, recorded in a later year. Two artists that appeared on the original track list were never recorded in DSD at all, and thus I choose two other artists to be included on this sampler.

You can read anecdotes about these 25 takes in the booklet.

25 Takes from 25 Years of Recording
https://channelclassics.nativedsd.com/albums/SEL6615-25-takes-from-25-years-of-recording

Among the 8 new DSD releases today over at Native DSD Music's web store, a pair of Violin Collections by Salvatore Accardo for under $9 each in Stereo DSD for Classical Music fans.
Previously available only on Gold Stereo CD, not available on SACD.

Originally available on Gold CD, we're delighted to bring this pair of Stereo DSD Downloads to you today at the Native DSD Music store! Best of all, each album sells for less than $9! Now that is an offer that is hard to refuse. "
Click to expand...

The Best of Violin
https://fonerecords.nativedsd.com/albums/GOLDCD067-the-best-of-violin

"Headlining today's 11 new DSD albums is an Early Release: pianist Enrique Bagaría Plays Haydn - a new Stereo and Multichannel DSD 256 recording from Eudora Records. The album was recorded at Auditorio de Zaragoza in Zaragoza, Spain by Gonzalo Noque with the Merging Technologies Horus converter and microphones from Neumann microphones and Schoeps Mikrofone. It is available at the Native DSD Music store a full 4 weeks ahead of its release date! Better yet, buying the DSD 256 editions of the album also provides you with DSD 128 and DSD 64 editions of the album Free!

Gonzalo tells us "We are so proud to offer what I feel is an outstanding recording. I honestly think it is hard to find such inspiring and refined performances of the music of Haydn: these are masterpieces and Enrique Bagaría's playing is simply a class of its own. The DSD format brings the perfect transparency to the acoustics, instrument and playing, and as a little tease to the rest of the formats, we offer the DSD Album exclusively 4 weeks before the official release date - only at Native DSD."

Pianist Enrique Bagaria adds "Haydn’s music allows the performer to be very extroverted, very human, because it uses such a variety of colors to portray different emotions. It begins rooted in reality and then soars towards the sublime – the opposite, in a way, from what Mozart’s music does."
Click to expand...

Producer and co-recording engineer Jared Sacks tells us "Once I arrived with my van full of gear in Oviedo (Spain), we had the luxury to record for 4 days, which meant there was plenty of rehearsal time and time to listen back to takes to get it right. Getting it right, they did.

I had already worked with Ning Feng on 5 gorgeous recordings, but ‘Apasionado’ exceeded all my expectations. The orchestra members were clapping for Feng after every full take of a movement. A moving experience!

The music is of course with a Spanish tint – being very enjoyable and accessible. Pick any movement - close your eyes but not your ears."
Click to expand...

Currently $22.48 at Acoustic Sounds with the coupon code. Full stereo. Should have bought In Dreams instead. Oh well. Maybe later.