MidiMagic said:
Is there surround sound on this?
Click to expand...

Yes. 5.1. The clue in my response were the words "multichannel release".

I meant on my CD.

MidiMagic said:
I meant on my CD.
Click to expand...

So you are asking if your CD has surround tracks? I would think not. The CD format only allows for 2 channels. The only CDs I am aware of that include any type of surround are those that used 70's era matrix style encoding for the masters (ie: SQ, RM, maybe Dolby Pro Logic, etc.). They are not discrete and need to be played back with a proper matrix decoder. Such releases are often referred to as "stealth quad" on this forum because they seldom indicate they are encoded on the packaging. The Dolby ones are a possible exception to the stealth designation as I do have an Emerson Lake and Palmer CD with a Dolby encoded version of Pictures at an Exhibition which is clearly noted on the packaging.

I have many Dolby encoded CDs. Many are explicitly labeled, and many more are not. I also have several CDs with the QS logo on them and a whole set of Angel recordings that are CDs of the SQ records they made.

I wondered if this CD was known to be one of them. The choir seems to be spread in all channels.

I was not expecting discrete tracks. I don't want them. I want standard formats that everyone can play.
Last edited: Nov 25, 2020

Has anyone noticed that some of the material is not the same as the original vinyl release? Different takes?

MidiMagic said:
I wondered if this CD was known to be one of them. The choir seems to be spread in all channels.
Click to expand...

I may have missed something on Quadrophenia...choir?

tarkusnj said:
I may have missed something on Quadrophenia...choir?
Click to expand...

He's referring to a symphonic version he has.

I think, I read somewhere that Entwistle did the remix, correct me if I'm wrong, the French horns are more prominent , and his style of Bass is more like Lead guitar.

Episode 96 of Rick Beato's What Makes This Song Great? is "Love, Reign O'er Me":

fthesoundguy said:
I’m a little disappointed because this does not sound that clear or good too. Nothing pops out and everything just sounds messy. That upper midrange just sounds weird on some songs. You can definitely hear it on almost every cymbal hit as well as the attack on the toms. It sounds like it was mixed with the early 70s limitations and not in 2014. I’m guessing the tapes were maybe in rough shape, but the tools are still available to help it out...

The fact that I have to crank my LFE up to get anywhere near the proper bass frequencies is really frustrating. There’s apparently some center issues as well that I cannot address because I listen off the discs. Again, If you have to manipulate the channels to get it to sound proper, more points off.
Click to expand...

I listened to Quadrophenia yesterday, and decided to try to fix some of the things that bother me. I did not attempt anything complicated because spending too much time fixing something makes me sick of hearing it. Here's what I did:

1) I Am The Sea: The thing is recorded way too loud. When I Am The Sea transitions into The Real Me, the latter sounds totally de-balled with no impact. These two should transition like they do on Entwhilstle's 1979 remix where The Real Me jumps out of the speakers. I lowered the volume on I Am The Sea by -6 dB using Audacity. I like the transition much better now.

2) General EQ: Upper midrange to highs sound messy as noted by @fthesoundguy . Previously, I too thought the bass was problematic, and that is indeed true on some tracks. But I decided to go the opposite direction...I cut the treble by -5 dB across all tracks. I simply did this with the Marantz processor. That deep treble cut seemed to bring up the bass frequencies nicely and smooth out some of the smeary/messy sound of the cymbals without burying the mid to high frequencies. I was surprised by how deep a cut was needed, and how such a deep cut did not sound extreme.

By making these two simple changes, I was able to listen to the 5.1 album start to finish and found it a much more enjoyable listen than in its "as delivered" form...(Well, at least it did yesterday. Who knows what my ears will prefer next Tuesday. LOL)

Not familiar with this one. My introduction to the album was the '90s Townshend/Astley remix.

JediJoker said:
Not familiar with this one. My introduction to the album was the '90s Townshend/Astley remix.
Click to expand...

Entwistle's remixes are on the soundtrack to the film: 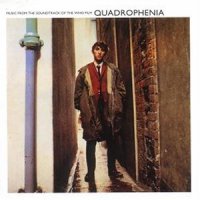