Please post your thoughts and comments on this 2014 release with a new 5.1 mix by Steven Wilson. Please mention which format you are commenting on in your response. The mix is the same on both formats. 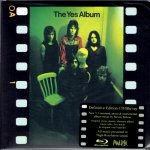 The retail DVD-A comes in a hard slip case, which is very nice. Here is a scan of the back with the audio data:

I have the BDA and have heard the 5.1 twice plus the live extras. Absolutely brilliant. The 5.1 is so immersive and everything very clear. This album's harmony vocals sound perfect in this format.

No particular highlights yet, its all good. This is one of those albums that I don't listen to much nowadays as I know it so well, but I have to say that it sounds so fresh in this format that I want to listen to it again straight away.

The live tracks are amazing versions, with very good quality sound. The extended A Venture isn't that much longer, but is very interesting as expected. An excellent all round package.

A 10 from me, Mr Moore how could you have known

The audio sounds amazing and the 5.1 mix pretty much nails it in all aspects. It sounds fresh, new and as if it was always meant to sound this way. And naturally, the content is superb. Lots to explore and a nice booklet too.

My only complaint, and it's just a very minor niggle, is that I am increasingly disliking the choice of packaging. More and more of my Blu Ray albums are coming in standard Blu Ray Amaray cases. and whilst I appreciate the "vinyl replica" nature of the Yes packaging, they're a little bit too non-standard for my liking (read, OCD!) and probably more liable to wear and tear

But as a product, they've nailed it again

This is YES. You are kidding right???@: umm kay..lets think about this:

P.S. I will be pissed if TYA BluRay is not in my mailbox when I arrive home tonight.

P.S. II. Good news lads! :chill I have promised Jon that I will limit my prevoting only to classic YES 5.1 Steven Wilson mixes, and
mainly because it is painfully obvious to even the most casual observer that they are in fact TENS in every way.

Got my DVD-A today and listened to it in my Acura. Sounds amazing, very clear. I heard a couple of times where the guitar was coming from the front center speaker and it sounds like it's right there.
The only weird thing is that I have to turn the volume up to about 20, whereas most DVD-A's I listen to at between 10 and 15. Also, like CTTE, I have to crank the bass up a little higher than normal to get a fuller sound, otherwise it's very trebly.
I can't say I'm a hardcore Yes fan but there's some great music on here.

My copy came two days ago, thank you Burningshed!

Just had time to listen to the surround and a few bluray exclusive live tracks but I am very happy. Wonderful clarity and I am hearing things I never heard before, and I grew up with Yes. Steve Howe should be very happy that his guitar playing can be appreciated even more now. I have noticed that the volume level is much lower than other blurays/dvdas I have so I have to turn it up and the bass may need to be adjusted too. Need to listen more and I do want to listen to the new stereo mix. Bring on GFTO! Bring all of them on!

Hey, my BR arrived on day in advance, just giving it a quick listen.
Music apart, not only Neil Wilkes is to thank because of the great authoring, a certain Mr Bob Romano and Mr Jon Urban have also and honorable place in the he sleeve notes!

César said:
Hey, my BR arrived on day in advance, just giving it a quick listen.
Music apart, not only Neil Wilkes is to thank because of the great authoring, a certain Mr Bob Romano and Mr Jon Urban have also and honorable place in the he sleeve notes!
Click to expand...

Totally agree, those names, apart from NW and Clair Bidwell, were missing from the CttE notes. And don't forget Tim McDonell, who is our own Timbre4! A big Thank You to you all.

(a bit off topic, but Chris Gerhard and Bob Squires are missing from the sleeve notes. These guys were also responsible for the SQ on the King Crimson releases. Bob is posting, but Chris has not been posting on QQ for a long time. Does anybody know if he is alright?)

Thanks for the shout out, we don't always get listed in liner notes as it varies by project. Just so very glad that we are getting such amazing releases!

Can't say what's up with Mr Gerhard, Mr Squires has been busy with a new job I believe. He should be along shortly to correct the record. Cheers

Just got my notification from amazon.com that my BD of the Yes album has just shipped and will be here Friday! I hate to have to wait but with all the great things being said about the mix I know this will be worth as it CttE was great! On the upside I got my Deluxe Homo Erraticus yesterday to tide me over until then . Man for all the death knells that have been tossed around about physical media and surround music, 2013 and now 2014 are starting to look more like the new and greater peak of both rather than the death. My thanks to all involved on both sides keeping this passion alive.

César said:
Hey, my BR arrived on day in advance, just giving it a quick listen.
Music apart, not only Neil Wilkes is to thank because of the great authoring, a certain Mr Bob Romano and Mr Jon Urban have also and honorable place in the he sleeve notes!
Click to expand...

Surprising then that Tim, Bob and Jon haven't yet given us their own opinions and votes on this wonderful disc @: !

All I can say is WOW :banana:

I bought the CD/Blu-ray. Its taken an album I had 'over' listened to years ago and breathed new life into it. I remember going round to a school friends when it came out to listen to it, and I got that same fresh wow feeling again. The 5.1 mix brings out things I hadn't heard before, and I do like the channel hopping guitar! The sound quality is really fantastic for an album released in 1971, and the 5.1 opens it up, I have to confess to not being sure it would work on this album, but it has, thanks SW. The other great thing is stick in the disc, push the green button and get 5.1 LPCM, thanks NW. I can see this one being played rather a lot and loud (hopefully the neighbours will like Yes).

I can't wait for the rest to be done, especially Relayer & Tales From Topographic Oceans which have so much that 5.1 can bring to the fore.

I've got to stop reading this thread. My blu-ray is in transit somewhere between UK and Australia. No tracking. The wait is killing me...

Maybe 6 would be closer

HomerJAU said:
I've got to stop reading this thread. My blu-ray is in transit somewhere between UK and Australia. No tracking. The wait is killing me...
Click to expand...

It was killing me too. Five One Santa delivered mine yesterday...The wait will be worth it :sun

Not much I can say that has not already been said. Gave it a 10.

colsky said:
Surprising then that Tim, Bob and Jon haven't yet given us their own opinions and votes on this wonderful disc @: !
Click to expand...

I can't say enough good things about this disc. While I love CTTE, this is one that is much easier to throw on and listen to because it's not sooo involved. However the new 5.1 mix makes these songs sound fresh and new. It is a great surround mix (aren't all the SW mixes though??). Clever and effective. I have been enjoying this for a while in the process of testing and fine tuning things for Neil and with each listen I have heard things that I never noticed before. Even if you are a casual Yes fan this really is a no-brainer.

DuncanS said:
I can't wait for the rest to be done, especially Relayer & Tales From Topographic Oceans which have so much that 5.1 can bring to the fore.
Click to expand...