Front and back of the box set: Back of the single Blu-Ray edition: 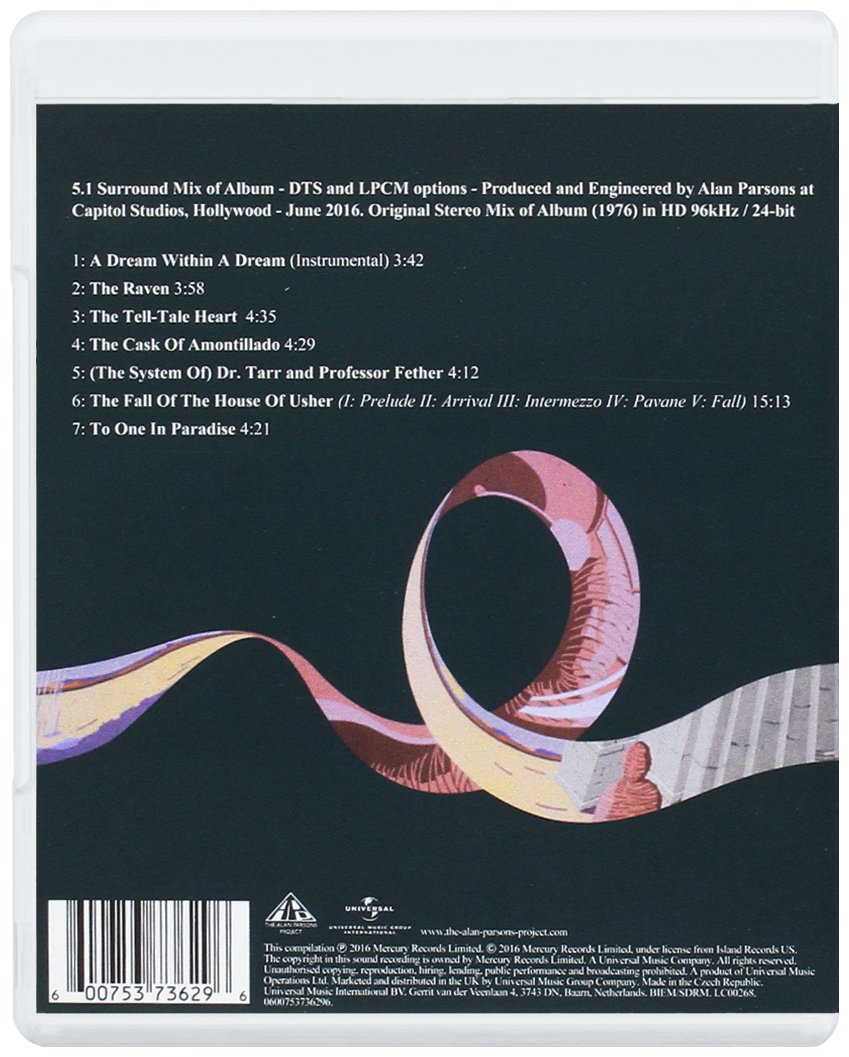 Overall a good mix, but it sounds congested during the loud parts. Some parts that are forward in the stereo mix are buried a bit in the 5.1 mix. Like the Horns on Dr Tarr. The organ part however stands out nice and clean.

Well I am prepared to give this a 10, one of the better releases in the high fidelity pure audio cannon.
A superb 5.1 mix from Alan Parsons, someone like Bob clearmounin who should get more surround releases.
The music is great, the fact that you get the original stereo mix.
A menu which is easy to use clear and precise, and I like the little album cover animations.

Wow, yes, this is a great disc...I know I have no $$$ but my baby got it for me...
The first impression from somebody who is NOT familiar at all with this LP (but with the rest of his catalogue)...it sounds TOO GOOD!!!!
An exquisite mix and very refined sound...and we get the Orson narration and the extra 1987 guitar solos...

Marvellous surround mix with great sound - an all round winner. Let's hope this is just the beginning.
D

Well, well. Maybe you hoped for someone giving an extensive text about this mix. I hope it's here.
As many pals here said, many elements from the '87 remix are put in. They're not only the guitar solos, there's drum reverb (The Tell-Tale Heart, The Cask Of Amontillado), and some arrangements (The Raven) that are, so clearly, part of the remix. And the marvelous narrations that Wells did.
I'll do it song by song. My feelings need to be ordered.
For A Dream Within A Dream: From the start (with orchestral and synth parts coming from everywhere), to the end, with that amazing bass line (it REALLY shines in the front channels and LFE, as it should be), this is an excellent and balanced mix. The narration isn't limited to the center, it's spread around every speaker... even the sub, with some strange activity, and the rear ones: filled with some kind of echo that helps anyone trying to get inside the mood .
For The Raven: '87 elements start to be noticeable, some drum reverb, the guitar solo, and arrangements during the initial drum part. Due to the excessive activity here, some tiny parts that were familiar in the stereo version feel buried. As a logic thing, Alan's vocoder-processed voice is travelling around the four main speakers. The bass is strong here.
For The Tell-Tale Heart: More '87 stuff. Orchestral parts are sooo great and never front-heavy. The guitar solo feels a bit cold and lifeless (remember that the '87 parts were 80's 100% digital recordings), compared with the hi-res, analog sourced tracks that are beside it. The drum reverb, again, keeps the heavy moments with some stuff buried.
For A Cask Of Amontillado: This is GREAT. Everything starts with the piano in the rears. It's a strong mix. Some '87 drum parts are noticeable during the start of the loud part, but the saturated feeling is nearly zero. When you're inside the loud part, it's just the surround and you. You're inside the music. The LFE is working nice.
For (The System Of) Doctor Tarr and Professor Fether:The hard feeling is active and everything's right, except for some guitar part that is hidden, as one of you said. Right as the '87 mix, there's a string arrangement that joins this song with the next one. This arrangement, as all the orchestral parts in the album, is fully done with the four main speakers, and it co-works perfectly with the sub.
For The Fall Of The House Of Usher: OMG, OMG. Nearly my favorite music piece, and one of the best orchestral surround mixes I've heard. The narration uses the center channel, and it's the first and only time this one's a priority. Again, the strange activity of the sub and the echo hitting the rears are here. You feel like the symphony director, it's that exciting. I find myself dumbfounded trying to recreate the experience in words. :yikes: . When it comes to the rain and drum part, the dark mood of the sound glues to you. Altough the rain feels somewhat forced (it was a stereo recording done in a cloudy day, it's understandable), the door knock that subsequently turns into a drum kick, and the strings complete that mood.
For To One In Paradise: Ethereal, atmospheric. Woolfson's and Parsons' backing vocals are put in the rears. They sync up nicely with the main vocal track. Again, the strings are surrounding you. Amazing. The final narration goes all around, it makes me remember the 5.1 mix of 2001: A Space Oddysey Blu-ray, where HAL-9000 voice was mixed into all the speakers.
Overall it's an AMAZING, GREAT, STUNNING mix! Solid 9. Yes, maybe this score it's related to my system, Parsons' mixes are so perfect that you really need a great system to enjoy 'em.
(A few notes before you throw tomatoes to me : English it's not my main language.)
Hope this helps
Merry Christmas, have a nice night this weekend with your whole familiy, take care

I totally agree with the placement of the orchestra ; all around you, as it should be....it's a very elegant mix!!!

So I want to purchase the stand alone blueray. Im in the US. I cant seem to find it for sale anywhere on line. Does anyone have a suggestion?

LuvMyQuad said:
So I want to purchase the stand alone blueray. Im in the US. I cant seem to find it for sale anywhere on line. Does anyone have a suggestion?
Click to expand...


Sent from my iPad using Tapatalk


Sent from my iPad using Tapatalk
Click to expand...

Would probably given the surround a 10 if I had grown up with it, but gave it a 9. This is a very good album and surround mix. I have had a rush of surround SACD, Blu-ray etc come through the door lately (which is nothing to complain about!) except it has prevented me from doing a large number of repeated listens, so this review is after 3 listens to the album. If you are a fan of Alan Parsons and/or a fan of this album, there is no reason to hesitate buying.

Used to listen to my parents' vinyl copy of this record back then… Never got the CD because I didn't like the '87 version and when the later deluxe editions were released I somehow never got around to buying it. I was excited enough to buy the stand-alone blu-ray the week it was announced, to overlook the fact that the surround version was going to be the '87 remix. Oh, well… Even in 5.1 it sounds flatter than the original, the places where the production hasn't aged too well are amplified, I still find Mr. Welles' voice distracting and most songs use the additional speakers for reverb where the synths should be floating in the room instead. Yes, I am disappointed. Now, when flipping the record back then I usually placed the stylus right at the end of The Fall of the House of Usher because, why listen to a 15 minute track without vocals. Yeah, sorry. Maybe it's the lack of expectations here, but this track to me is the clear highlight of the whole surround mix. Voted a 7.

You know how it is when you get a 5.1 mix of an album that you've enjoyed for years. In my case, I introduced myself to Alan Parsons' albums when the re-issues came out in 2007. Right off the bat, I had the 1987 and 1976 versions to choose from on one set, and I quickly grew fond of the 1987 version for the Orson Welles narration.

So when this came out, naturally, I had the big question on my mind. "Is this everything I hope it would be?"

Listened to this one a couple of times now (never heard this before this surround version :couch) and it's another 10 arty. Beautiful album, great sound and mix.

I voted 10. Stunning release, I have listened multiple times over the last few weeks. I received at the same time as the Love and Rockets and the Pixies release and they don't even compare. The content and clarity with Alan Parsons is a must.

marpow said:
I voted 10. Stunning release, I have listened multiple times over the last few weeks. I received at the same time as the Love and Rockets and the Pixies release and they don't even compare. The content and clarity with Alan Parsons is a must.
Click to expand...

Now , this is where I draw the line and go:
"Apples and Oranges!"

Totally unfair comparison...first , with the kind of music (instrumentation, arrangements, etc.) and then, with...ALAN PARSONS!!!! Nobody compares to AP..I know there are plenty of superb MCH mixing engineers , starting with Elliot, but AP was a true pioneer!

I vote 8. Good surround mix, nothing really outstanding though. The music is good on most songs, it just slows down around song 6, too much orchestra, sounds too classical to me, but then it picks back for me on song 7 with the wind and organ, and continues to build. Overall enjoyable.
You must log in or register to reply here.
Share:
Facebook Twitter Reddit Pinterest Tumblr WhatsApp Email Link