Please post your thoughts and comments on this 2018 reissue of the classic Be-Bop Deluxe album "Sunburst Finish".
This 2018 deluxe edition from Esoteric Recordings contains a brand new 5.1 surround mix of the album mixed by Stephen W. Tayler. 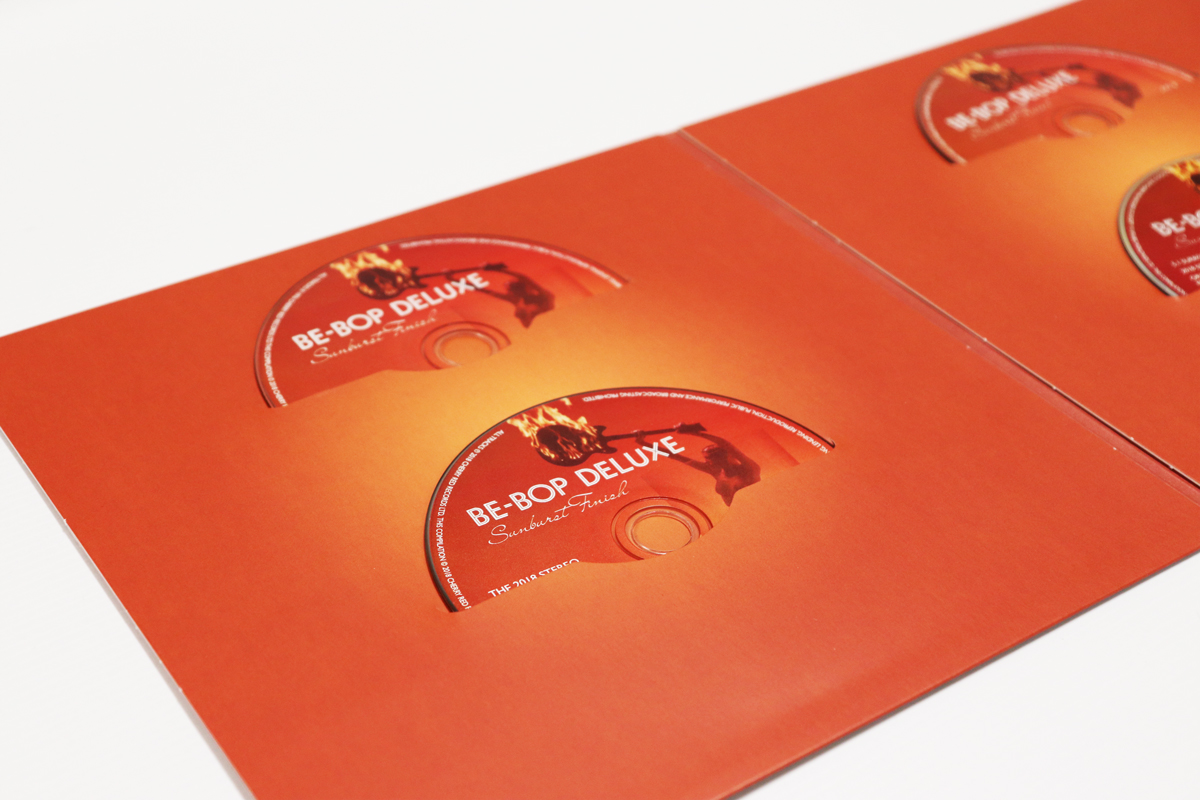 only had time for one play through late last night (of the DTS 96/24) but not bad at all.

the surround mix is better than i was expecting (the only other Stephen W Tayler 5.1 stuff i'd heard was Howard Jones which to, be frank, wasn't great).

some niggles, none real deal breakers.. some drum parts sound kinda wimpy and a bit splashy (poorly recorded maybe? or the master tapes degraded in the last 40 years? idk i've never heard the album before, as is so often the case for us here I took a punt for surround's sake!).. oh and i found the overall volume level kinda low (a good crank helped bring things to life), also bass levels seemed inconsistent from song to song and the Rears a tiny bit quiet on some tracks perhaps.

musically enjoyed it a great deal, though a recurring thing seemed to be just when a track was getting good or the guitar work was really starting to cook, the song would end! what a tease!

I have already given some brief thoughts on this elsewhere.

But to sum it up, like Fred said , its brand new to my ears.
Thoroughly agree on the mix anomalies.
The music is great and not overly dated.
The overall package is very well designed.
And I've still got that flaming guitar pic to raise an eyebrow or two!!

I too am voting 8

This was one of my favorite albums back in the day and I was very excited to see it come out in 5.1. Blu-ray would have been nice, but I enjoyed the mix despite it being a little conservative. For example, the several guitar fills in Blazing Apostles woudl have been fun to have show up in different surrounds. But I still enjoyed it quite a bit for a 70s recording. Between an 8 and 9, I go 9 due to my affection for the original.

Despite being a fan of Bill Nelson's Red Noise as well as his great 80's recordings I knew very little of his work with Be-Bop Deluxe. Glad I took a chance on this one. I love the material--adventurous pop/rock, cleverly arranged and expertly played. The surround mix is effective if somewhat conservative. The fidelity is OK, certainly not stellar. I imagine they made the best of the source material but it sure would have been nice if they could have retrieved more detail in the instruments, particularly the drums and bass. Regardless I would still recommend this release on the strength of the material. I give it an 8+.

Monk - the early Bebop Deluxe albums featured Bill Nelson in ‘guitar hero’ mode. I absolutely love Axe Victim and Futurama. Axe Victim was heavily influenced by Bowie glam rock and Bill’s guitar work is sublime throughout. Futurama was more refined and closer to what Sunburst Finish ended up being. Also worth checking out is the 4 disc set, Live at the BBC 1974-1978. It features 3 CDs of fantastic BBC recordings and a great DVD of live performances from the Old Grey Whistle Test. Great stuff!
J

I have had all of the band's LP's for years and this was always my favorite. A little more pop oriented than the harder rocking previous albums. Great songs on here and beautiful arrangements. The 5.1 mix really shows off how intricately crafted these songs were. An excellent mix! The fidelity is certainly not mind blowing but the LP never sounded that great either. Focus on the lyrics and the beautifully layered songs and this minor issue falls by the wayside. Great bonus tracks, videos, booklet, and packaging make this a home run. The package is very well done and I am lined up for the next one! I will deduct one point for the lack of jaw dropping sound but that is really nitpicking. A very strong 9.

This was my first BBD album so will always have that special place in my musical history even though I consider Drastic Plastic to be my fave BBD album (really want that one to get the 5.1 treatment!).

I really like this mix and don't find it to be too "conservative" at all - it's a mix more done with placement in mind over movement around the field (although there's some quite nice bits of that too).

Enjoying this a nice active mix, no holding back frankly in keeping with the music more glam than prog, a bit kitchen sink at times.

Agree the drums could be higher up in the mix but I also don't think they were recorded that well closer to biscuit tin rather than mega drums.

Shame as I think the drummer is good.

Overall a enjoyable romp, and the box set is nice and was a reasonable price content for content.
Last edited: Jan 13, 2019

So..
I am a fan of 80's Bill Nelson and was not very familiar with his 70-s output....
What a wonderful surprise this is..I was expecting a so-so MCH mix and was promptly blown away, great mix!!!
And the material .. Maestro Nelson was definitely way ahead of his time and the band was really good (check out the OGWT performances!),
Gotta give it to him, great music, inventive lyrics and some mindblowing guitar..he definitely was a GUITAR HERO!!!!
Proto Prog here we go!!!!!
Hope the rest of the BBD LPs get this treatment...
A revelation and a 10!
G

Sounds great
I only wish the back 2 speakers had more going on .
"Surround" the sound.


Produced by Roy Thomas Baker, Futurama represented a huge leap forward in creative terms for both the band and Bill

Really love the content musically; fidelity is lacking in the low end, but can be improved by jacking up the LFE channel a bit; surround mix is discrete and active. I'll give it an 8 and will pre-order Futurama without hesitation

Finally got to listen to this and went thru it 2 times straight in row. AWESOME. I love this record (not as much as Futurama so I am really excited about that one.).

The 5.1 DTS surround mix is great but like most have said it could have been a little busier in the rears.