Swan song from the brooding singer/songwriter, from late '73.

the quad mix is a big improvement over the stereo on the vocal part ,as the stereo vocal was much drier and harder sounding (almost mono in a way)...the quad version has ambient echo added to the vocal and is far more pleasant even in stereo mode.

I rated this one '5', kinda mediocre and dull as quad mixes go...yet I agree that it is an improvement over the stereo mixes, if only because Croce's presence is more--how can one say it?--ambient? But the problem with Croce in Quad was pretty much the problem with some of Cat Stevens' stuff: a lot of ambiance, not a lot of separation, not a lot of what one would expect from a quad mix. Like Cat, Croce's music was often just a guy and his guitar, a little bass and percussion, not much more. But IMO, little thought went into these mixes. The rowdier tracks have some separation, but not as much as one would expect, while the acoustic numbers have echo and ambiance but not much else (and the 'dry' vocal versions were probably more honest to the original recordings). Croce was also a bit maudlin at times, and with a curious 'redneck' bent in his more rocking songs, as if he enjoyed being a drunk at the local watering hole (or a bystander making notes). He was a country music artist in self-denial, perhaps.

I have to disagree with the above comment. Though they did get a bit carried away with the reverb (seems to be a common theme with the ABC quads?), every track features discrete elements in the rears. Usually backing vocals, strings, percussion, or piano. The title track starts off with just echo in the rear, but piano and strings enter as it builds. "Lover's Cross" seems to have different acoustic guitar parts spread all around you. “Thursday” is one of my favorites - during the chorus, you can hear different vocal harmonies isolated in each rear speaker while Jim’s lead is front and center. “Recently” is another highlight with what sounds like a bongo drum isolated in the right rear speaker and a vocal harmony in the left rear.

I did a three-way comparison between the QS LP, U.S. Q8, and Japanese CD-4 (nice to know I’ve got one of the ‘holy grails’ of quad collecting!). All three feature the same quad mix, but what’s strange is the amount of echo in the rear channels seems to vary. 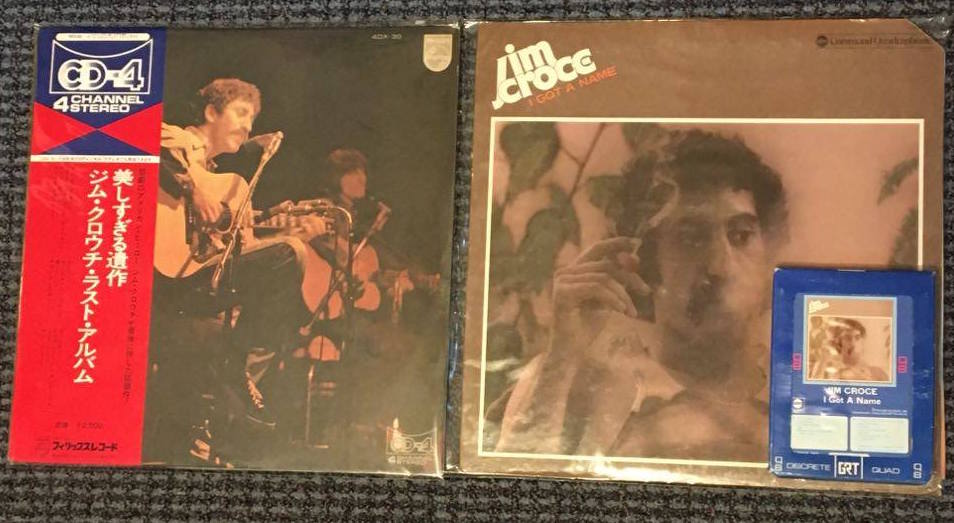 The QS LP (through an Involve SMv1) seems to be the driest of the three, while the CD-4 seems slightly wetter than the Q8. I guess the matrix decoding process somehow dried out the mix? The CD-4 separation comes extremely close to matching the Q8 (see waveform pics below), but it sounds very brittle and midrange-y compared to the other two. I’m not sure who pressed these discs for Phillips, but I’m guessing it wasn’t JVC as their Japanese CD-4 pressings (Motown, Avco, etc) sound much better than this.

I'd go with an "8" on this one - good music with a solid quad mix (especially considering the relatively sparse source material), but ultimately I prefer the other two Croce albums that made it to quad (Life & Times, You Don't Mess Around With Jim).

Here's that cool backing vocal bit in the rears from "Thursday" (taken from my CD-4 conversion):

This is, in my opinion, far and away the best material from the sadly short life of Jim Croce. I like every song and there is so much emotion (sadness, mostly) in so many tracks. He really was expressive in that way. I had the Q8 when it came out and got the QS after I (finally) got a decent QS decoder in the QSD-2. The mix sounds identical on both (no I don't have the CD-4!) and although its a bit minimal, I think it is 'tasteful' given the material. Too much steering would really distract from the fine material. A 9.
You must log in or register to reply here.
Share:
Facebook Twitter Reddit Pinterest Tumblr WhatsApp Email Link