How to Remix 5.1 Concert Videos to Improve the Surround mix

Overview:
As many surround music fans have discovered, many music concert release, both on DVDV and Blu-ray, often have underwhelming surround mixes. Many have almost no music in the rear channels, just crowd noise and maybe some reverb. Many surround enthusiasts prefer a more discrete or immersive sound stage than simply listening to front channels.

This document describes a method to enhance concert surround tracks by describing a work-flow and tools anyone can use to remix the original surround track to contain realistic surround by enhancing the existing (inferior) 5.1 mix on your DVDV and BDV discs.

There is nothing revolutionary about the theory, but the methodology and tools described in this ‘How To’ make this way easier than you may think.

Some interesting concerts that have worked well are The Police – Certifiable where Sting’s bass guitar is isolated in the LFE channel, voice and drums in Centre and the FL FR upmix add significant rear music for the high fidelity recording. Midnight Oils’ Armistice Day Live In Sydney where Garret’s voice is isolated in C and the original mix had no music in rears. This sounds spectacular with the fronts upmixed to quad giving nice rear music.

I plan to upload some short 30 sec examples of before (original 5.1 mix) and afters (remixed) over the weekend. So please check back here.

The Theory:
From my experience with 5.1 concert mixes there is usually a good centre channel mix and LFE channel. This method will reuse those two channels in the new remix.

We can derive good rear channel music from many Upmixing applications available. There are several software applications that can upmix stereo to quad or 5.1 including:
So, we can upmix the existing concerts 5.1 front left and right channels (FL and FR) as a stereo pair to create a new quad or 5.1 mix, then remix the new FL, FR (fronts) and SL and SR (rear) channels with the existing C and LFE channels to create a new 5.1 mix. Then merge the new 5.1 mix into your concert video.

Extracting the original audio from your concert discs, converting the audio to individual mono channels, upmixing, remixing the new and existing channels, merging the new multichannel surround back into your concert video. This is way to hard, right? No. It is quite easy.

The Methodology:
This ‘How to’ uses Windows based software and assumes you can play Concert Videos with Surround from a PC or media player. Applications that play ripped DVDV and Blu-ray Concerts include JRiver (paid license required) Kodi (free) and VLC (free). MakeMKV and Music Media Helper (MMH) can be downloaded from the web.

Here is a breakdown of the steps required:

Use MakeMKV (free) to convert your disc to MKV format (MKV is a lossless container that can contain copies of SD, HD and 4K video streams and various audio streams ranging from DTS and Dolby Digital through to lossless PCM, DTS-HDMA, TrueHD and Atmos.

Use Music Media Helper (free) to split your initial MKV file into its chapters (song tracks) and rename to the song titles. These individual song MKVs contain the same video and audio streams you selected when you ripped your disc.
NOTE: Music Media Helper works with multiple input files. Most to the steps are done in a single batch, simply select all the files the process ALL in one command. This is way easier than using other tools where you must process each file individually! 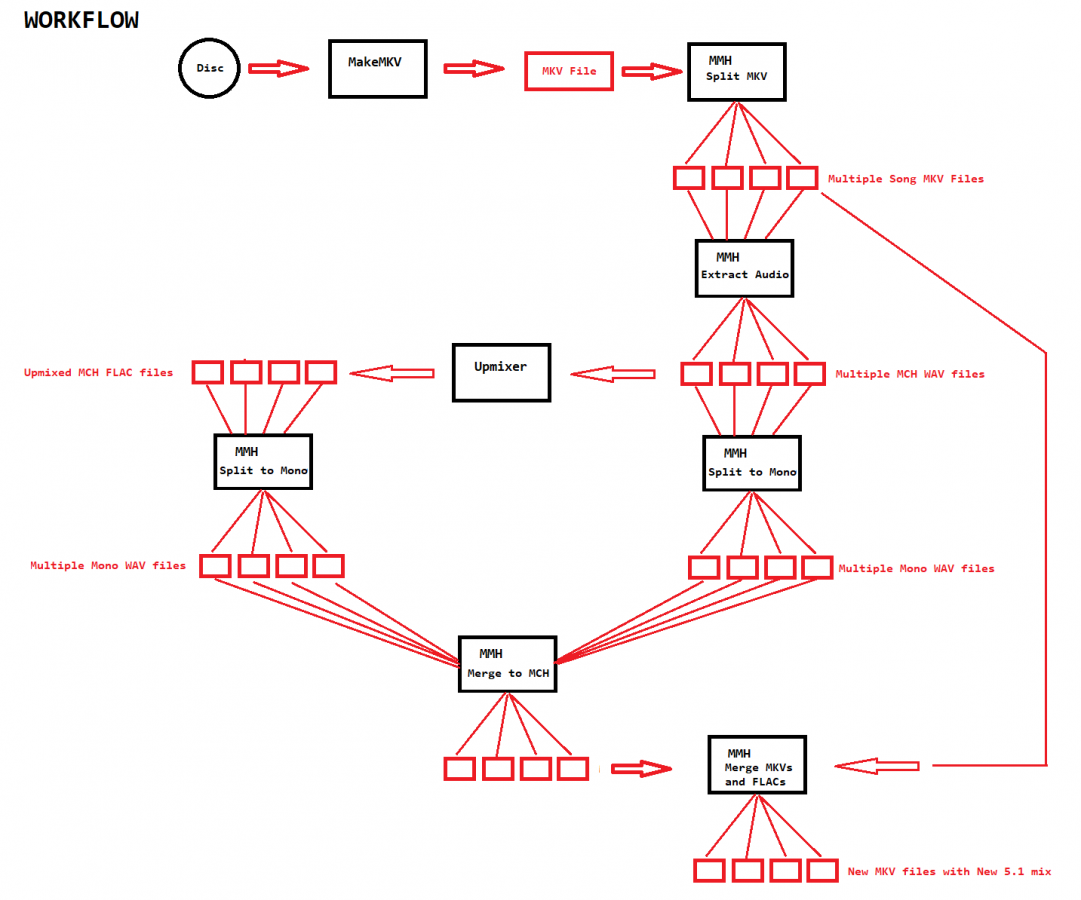 Full how to PDF:

Garry
You must log in or register to reply here.