I am refurbing a Sansui QRX-6500. The quad sections do not work well so I am in the process of recapping boards F-2047 and F-2048 and replacing transistors. I got the schematics and parts list for the Variomatrix boards from the QRX-5500 service manual which uses the same boards.

Just to be sure, I checked the actual components on the PCB's. A few minor changes to some capacitors but here is the quandary. The schematic identifies TR05 and TR08 as pnp's (2SA726) but the PCB has npn's (2SC871 which was a replacement used throughout this board for the SC1222). And it all looks factory original.

Here's the schematic, the two transistors in question are circled in red: 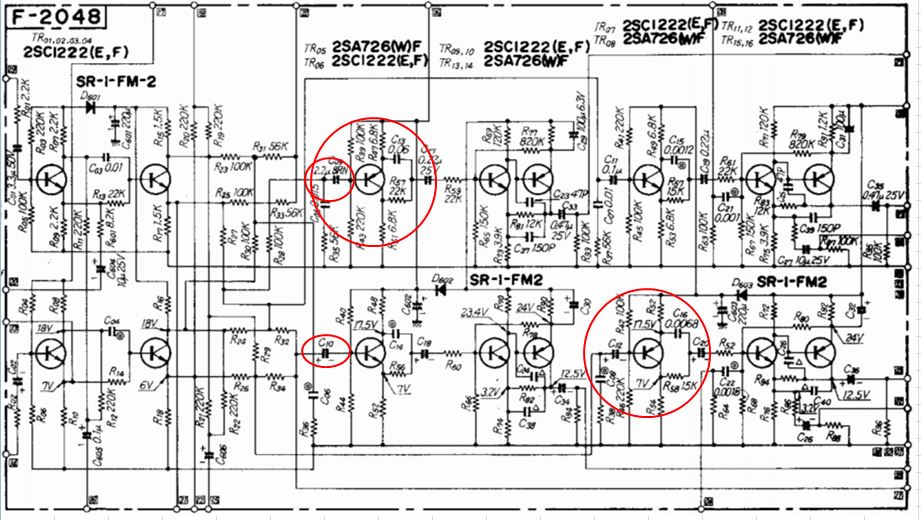 Maybe they ran out of the pnp's and they just stuck in the npn's? The capacitor replacements look like that is what happened. The only two 2.2uF replaced with 3.3uf, the only other two small electrolytics on this board. It seems like this would be an odd tweak, such a small change to a coupling cap.

The npn's probably work fine except for the phase inversion which would hardly be noticeable. Does anybody have this F-2048 board that they could check? Or does anybody know how this circuit is supposed to work?

Here's the board with the transistors in question circled: 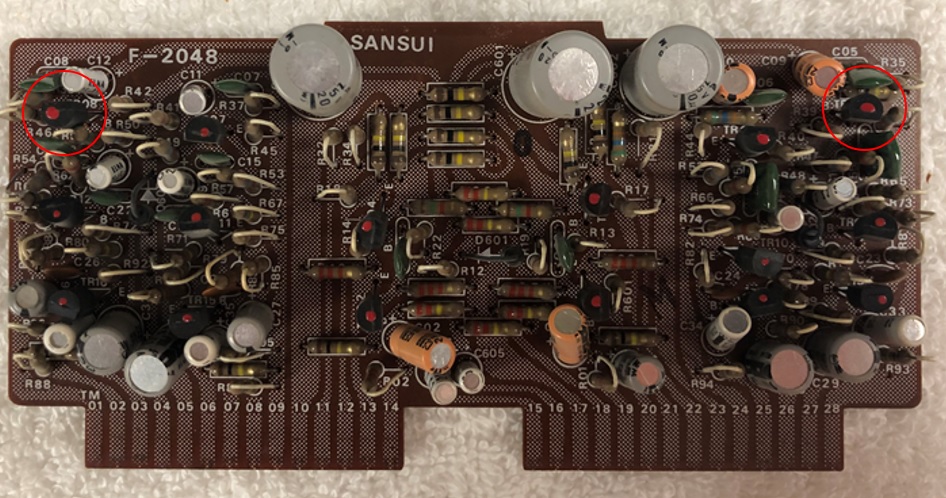 Thanks for any assistance! An unusual find...

It’s been some time since I designed transistor amps, but I’d be very surprised (flabbergasted) if you can swap an NPN and PNP in a circuit. I’d check the bias levels to see if they make sense as-is.
Can I ask why you’re changing out transistors? Unless they are defective (unlikely) there’s no need. Semiconductors don’t degrade like caps.
J

Been a while for me, too, I thought npn and pnp were basically biased the same but functioned opposite... one turns on with more current, one turns off. Probably an oversimplification, need to read up on this and re-school myself. You're right, perhaps it will be obvious when I look at the bias voltages.

The electrolytic caps were a given, the phono section had one side shorted and the right channel did not work so I replaced them all on that board. The Variomatrix boards in 4-channel mode has one really weak channel and just does not appear to be functioning correctly in general so rather than doing a proper diagnosis, I figured I would just replace all the caps first. In reading up on the transistors, there was at least one case where somebody identified a weak transistor as a root cause of a similar issue. Another poster suggested several transistors Sansui used were noisy and should be, let me quote, "Get rid of them. Desolder them. Squeeze them in a bench vise. Drown them in 9 molar sulfuric acid. Set them on fire, grind up the dust, and bury them in a 22 foot deep hole, covered with boulders the size of Rhode Island. These are notorious for generating cyclic/rhythmic noise all by themselves, without any outside assistance." and same poster on the 2SC871's specifically, "These are often found to generate spurious noise, spikes, and static, sometimes potentially damaging."

I found it so entertaining and the boards are such a task to get in and out, I sourced some KSC1845's that are supposedly more reliable and low noise. Figured while I'm in there, I'd replace them to get another 50 years out of this beast.

Still, so weird, pnp on the schematic, npn on the board. Of course the smart move is to replace like-with-like. It is just one of those, "duhhh..." moments. I can usually justify a change on a board compared to a schematic but this one perplexed me. Like you, I figured the biasing would be fouled. The circuit may allow it, it is a little unusual.

You got me thinking though, I guess I did not check the board to see if they swapped resistors...I'll go back and check and really, thanks for the reply
J

So considering both the transistors and resistors were swapped, I guess the change of pnp to npn was design intent and never made it to the schematic. Case Solved.

Still it would be interesting to hear about any other F-2048 boards & understand what these circuits actually do...
J

You‘re a good detective, sounds like you’ve figured it out. Good luck with your project, and may it sound great!

I suspect they also swapped the output coupling capacitor on the emitter and resistor on the collector. No matter what is used, PNP or NPN, the emitter will be a non inverting output and collector inverting.

Finally looked up the Sansui patent and yes, I see, phase shifters, interesting. meant to give the rear channels a "bounce off" sound. I'll check the output on the swapped transistors when I get a chance. One more round of soldering in capacitors and hopefully no trouble spots, then finally test the quad sound. Thanks for the help,