Please post your thoughts and comments on this 2018 album from British band the Pineapple Thief called "Dissolution".
The 5.1 surround mix (which was mixed by band member Bruce Soord) is available in both a 4-disc deluxe edition (with Blu-Ray and DVD) and a single disc Blu-Ray edition.
The Blu-Ray contains the main album and a bonus acoustic album, all in 5.1 surround. 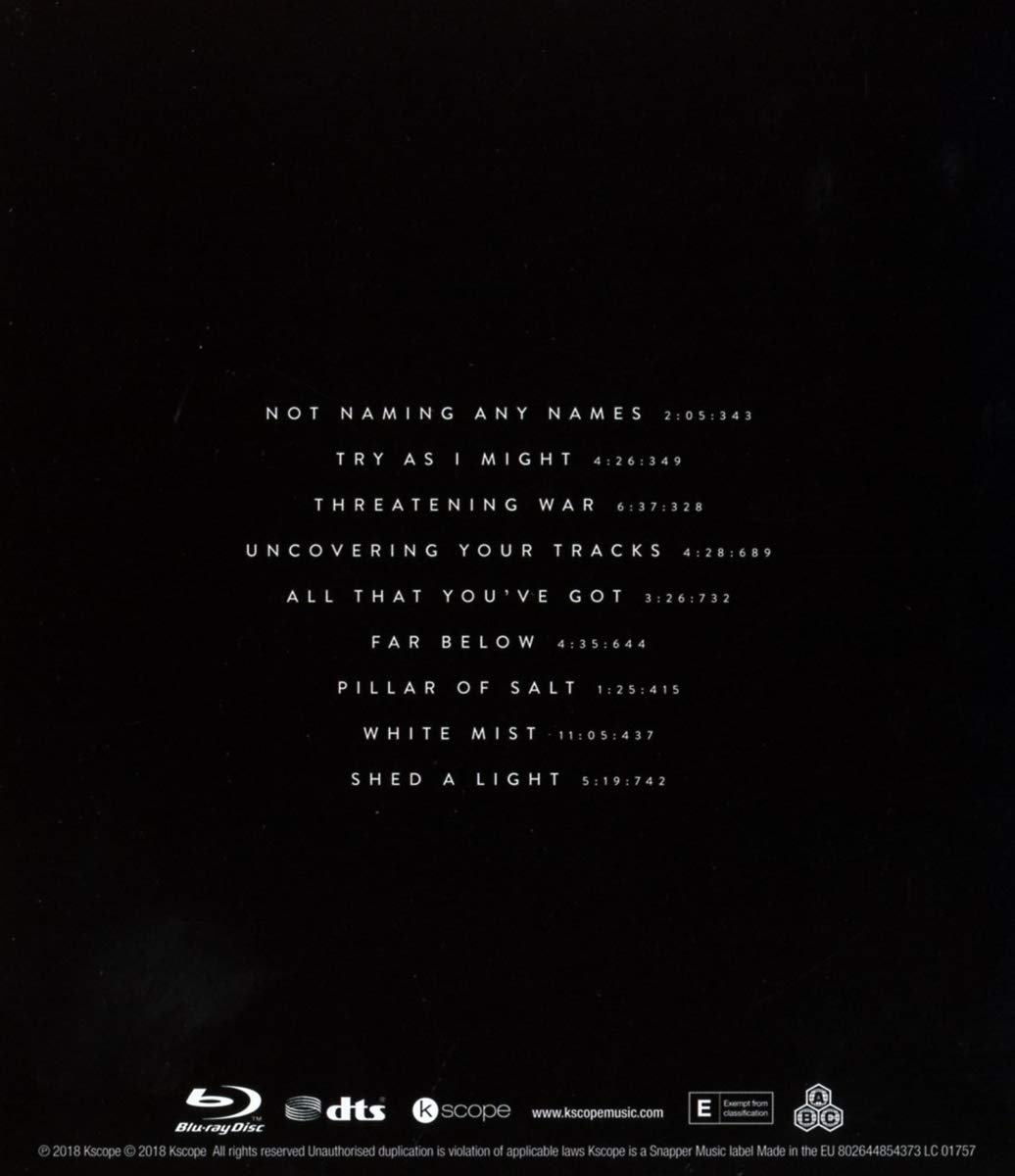 Ive recently got the single disc Blu-Ray and can report that this is an excellent album, definitely complements and is a development on the 2016 Your Wilderness album. It's a little more commercial sounding than its predecessor but very consistently good throughout and finishes on a high with the 2 stand out tracks, White Mist & Shed A Light. Ive listened to both the 5.1 PCM and DTS HD streams and they seem identical to me. What is noticeable is the really excellent quality and mix that Bruce has produced here, partially his vocals which is very clear and front focused. It's not an extreem discreet mix but it doesn't need to be by nature of the music with the rears only used to effect when it complements the overall mix. One interesting thing I did find however is my Sub went a bit wild for a couple of seconds at 42:33 on the final track, would be interested to know if other people experienced this. Not sure if it was a glitch or was meant to be ! Never the less this is a 10 for me, a very enjoyable listen.

I voted a 10 after only two listens. Gavin definitely sounds more adventurous here than on Your Wilderness. I listened to the PCM track the first time getting to know the songs and the DTS-Master Audio track, the second spin. The music is very good and with the exception of one song (Threatening War) sounds completely different than Your Wilderness. I like them both equally for different reasons. Though, the drumming is definitely looser on Dissolution. It sounds like Gavin is definitely a full member for now. Bloody lovely.

This album is a good follow-up on the predecessor "Your Wilderness". Regarding the songs and compositions itself, I think it's not as strong and a tiny bit more commercial sounding. Songs are more upbeat and tend to get rocky, which is not a bad thing at all. Sometimes I miss the nice mellow moods and atmospheres from "Your Wilderness", but both of these albums complement each other in a very nice way. Definitely a grower for me, as I started to appreciate the songs more and more with each listen. It's a bit short though.

The mix is very good, but not the best out there. I like that the drums are kind of raw sounding, with lots of the room mics mixed in, which gives the drums this natural sounding ambiance with lots of punch. Sometimes the body of the snare is too pronounced, which can muddy up the mix at the front from time to time. Overall, I'd have liked the cymbals to be mixed with higher volume, or at least some treble boost. The vocals on the other hand sound nearly perfect. A slightly more pronounced bass/sub would have been nice at some parts, but the album seems to be a bit inconsistent on that regard anyways.

I was surprised, that the surround field wasn't nearly used as much as on "Your Wilderness". The mix creates a nice surround field, but it's not as discrete as I'd hoped for. Also, the back field sounded kind of "narrow", if that makes any sense, almost as if the sounds were not really hard panned to the back speakers, but slightly moved into the back center field.

All in all, it's a great album with very good songs and a pleasing surround mix. I'd highly recommend it and gave it a 9!
B

Listened to it a few times already but can't seem to get into it. Nothing seems to catch fire for me except for maybe the last track. Ironically I find the acoustic version more interesting.

On another note, has anyone had luck ripping the BD ?

bluelightning said:
Listened to it a few times already but can't seem to get into it. Nothing seems to catch fire for me except for maybe the last track. Ironically I find the acoustic version more interesting.

On another note, has anyone had luck ripping the BD ?
Click to expand...

Ripped just fine for me.


Sent from my iPhone using Tapatalk
B

What software/version did you use to rip?

bluelightning said:
What software/version did you use to rip?
Click to expand...

DVD Audio Extractor along with DVD Passkey. I keep them both up to date.


Sent from my iPhone using Tapatalk

bluelightning said:
What software/version did you use to rip?
Click to expand...

I am using the latest version of makemkv on Linux and it fails at ripping, stating it is unable to decrypt.

I figured what was going on. I simply needed to restart makemkv . Every time it is started up it fetches the latest key database. I had my window open for more than a month, hence didnt have the latest keys. Thanks for the help.

bluelightning said:
I had my window open for more than a month...
Click to expand...

Yikes! Give that computer a rest once in a while!
B

It is my file server. It stays up all the time. The only time it comes down is when an update is needed or I am on vacation.

Can't get enough of this album. The main album is top notch prog. Great songs with excellent playing by the band. The surround mix is signature Bruce Soord. Love it how he managed the master the art.

And then there are the re-imagined tracks. Not the ususal acoustic versions from previous albums. Those were sweet already. But the re-imagined songs are a different animal altogether. Totally different vibe and great as well. The stand alone bd is another winner from the TPT team!

Okay, I've played the 5.1 a few times (the dvd as the blu-ray won't go in my Panasonics...grr....hope the fix comes soon) and listened to the 2.0 non-stop in the car for the last week or so.

Solid perfect from me....10...great songs, love every minute of it. Yes, as I said in the other threads - the recording and production is a little cleaner, less aggressive than the last album, and that makes (for me) a few more times though the record to get the nuances....and I did, and I think it's a great step forward for Bruce in terms of writing and production....getting a guy like Gavin on board has brought his game up to a new level.
Last edited: Oct 6, 2018

The stand alone blu-ray of Dissolution is a winner.

In addition to the nine featured tracks, you get six "re-imagined" & One bonus cut. The re-worked songs are not acoustic. They are versions performed by a guy named George Marios (electric guitars) & Bruce (all the rest).
I may like these versions better than the cuts on the main album.

My only point deduction for the release is in regards to the lyrics. They seem average at best. Otherwise - a solid purchase.
D

splinter7 said:
The album sounds like cousin to Porcupine Tree's output during the Snapper years
Click to expand...

That's my disappointment with this release. In comparison with their other works, it is much less varied and less memorable. Sometimes I think I'm listening to the To the Bone album. Technically, playing and surround mix are great.

I will still eagerly see them if they make it to the States on this tour.

First impression favorable. Mix plenty active, to my tastes, especially the reimagined tracks. Didn't pay terribly close attention to this lyrics, but nothing jumped out as half-baked.
No issues with my subs during Shed a Light (regular mix), but the subs get intense during a few passages.

As I am on a marathon catch up listening to the surround of this one of Bruce Soords best IMHO.
The album is not one of my favourite Pineapple Thief albums that would go to Tightly Unwound, this is a great album
You must log in or register to reply here.
Share:
Facebook Twitter Reddit Pinterest Tumblr WhatsApp Email Link