Originally released as a CD/DVDA-V release in 2005, the same 5.1 surround mix is now available on Blu-Ray Audio as part of the 25th anniversary deluxe edition of the album. As an added bonus, the Blu-Ray also features all 8 music videos from the album with high-res surround sound too! 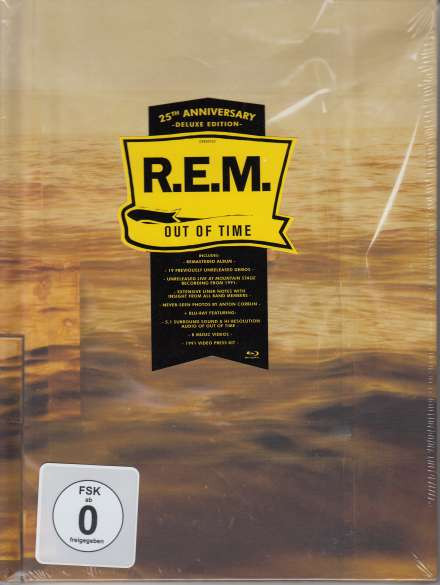 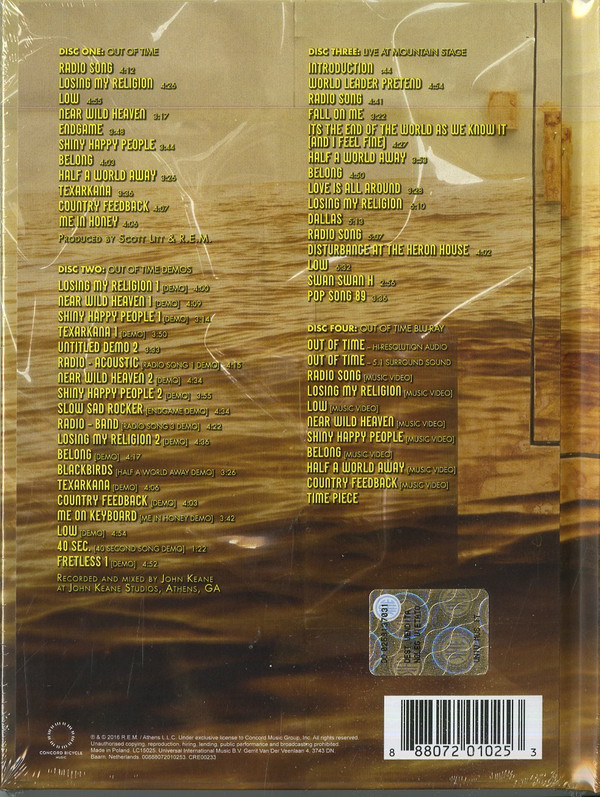 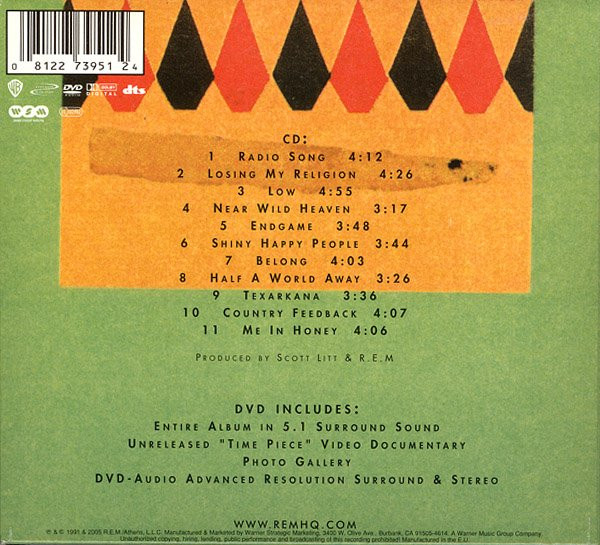 Man I love this disc!!!
My fav. REM album done in a fantastic 5:1 mix
I can't wait till later today when I can blast it...

great album, nice mix, supurb package 9/10 because they did not add all the excellent single B-Side anywhere in the package.
A

One of R.E.M.'s better albums (except Shiny Happy People). The mix is killer and the sonics have to be heard to be believed. Highly recommended. Overall it gets two greasy, messy thumbs up. Great all the way around. A perfect 10.

I played this album to death back in 1991 and then pretty much all the way through the 90's. It is, for me, their finest body of work and that's not to say anything else they have done isn't good as I love R.E.M. and everything they've done.

So, I thought I knew this album intimately.

How wrong was I??

Here I am, 22 years later and I am completely re-discovering this piece. I am hearing things I never heard before, things that I guess get all mushed up in the stereo mix, things that are there but don't consciously register in their own right. This DVD-A release really exemplifies why I love multi-channel audio. This is how I love to consume my music.

If you're a fan of R.E.M. then this is a must have, although it would've been nice to have some bonus tracks on here such as b-sides, but the documentary is a nice touch. However, if you are a fan of multi-channel audio, this album really ranks up there as a demonstration piece, in my humble opinion.

Truly stunning and worth every penny of the £20 I paid for it on eBay. I would happily pay more.

Like, I imagine, a lot of people this was the first R.E.M, album I ever heard so I was delighted to find it re-issued with a 5.1 mix and it's a classy and well presented surround mix. Maybe lacking a little (and I mean *just* a little) detail and separation compared to some of the best, hence the 8, but a very solid addition to my collection.

Have all their material on CD (and the In Time comp on DVD-A), I figured that was enough.

But in retrospect this is the one REM DVD-A I wish I'd bought when they were plentiful at retail.

I didn't get them all; I missed "Document" which was pretty stupid of me as it's probably my favorite album of theirs.

This is possibly my favourite R.E.M. album, although I don't like all of it. Although I'd call myself a fan, I don't think there's a single album I like all the way through.

Radio Song: pretty good, but a prominent guitar part is pretty much missing from the mix, and the guitar on the outro doesn't sound very good. Great bass

Near Wild Heaven: Excellent-. First verse and chorus retains feel of the stereo mix, some intrusive string stuff on the first half of the second verse. Mike's vocal a bit over exposed for my liking on some choruses.

Endgame: Generally excellent. Over panning to rear left channel for the sax (or whatever it is) for my liking. (Like the triangle on Stand.)

Shiny Happy People: Not so good. String intro starts of fine, but then into the main track and the track shifts jarringly more to the front, and some guitar is far too quiet. Mike's vocals too loud in the chorus. Some prominent acoustic guitar in the rears, which is nice, but where is the electric guitar?! Tambourine sits nicely in the front rather than rear left. Lacks some of what the stereo mix has. Quite dry.

Belong: Very good. Loads of reverb on Michael's spoken verses, which some might find surprising at first. More of a room filler than the slightly dry Shiny Happy People, and certainly more cohesive. Sounds like a (different) edit on the second chorus?? Part of Michael's vocal perhaps hidden more by the stereo mix sounds a bit strange on the chorus

Half a World Away: Excellent. Prominent percusion in the rears, but it is on both sides! Organ lower in the mix than the stereo, harpsichord higher. Some may miss the organ, but again this is a cohesive mix that fills the space well.

Texarkana: Okay. Generally quite good, but inconsistent quality brings it down. Peter's guitar over tamed in the verses. Mike's backing vocal very very quiet in the chorus. Fills the space well, but sounds a simpler/more sparse in the choruses. Middle eight promising, but then the strings seemed mixed too far back for some of it.

Country Feedback: Excellent. A track I've never played much, so taken far more at face value than the others. I really like the distorted guitar and the feedback in this one. The mix works for me, and fills the space it has well.

Me In Honey: Excellent. Another I've not played a huge amount, so taken at face value with no real comparison to the stereo mix. A good space filler again. Some may find Kate's vocal to be too low in the mix for their liking in places.


Again, such a short time before the intrusive menu audio leaps in, so the end of the album can't be savoured and thought about until one is ready to move on, unless you're quick with a pause button.

Strong album and effective mix! I've really come to appreciate this disk, though it took me a while to warm up to the album. An 8!

There are currently 2 copies available for ~35 CAD + 3.50 shipping at amazon.ca.

As of today, this poll thread has been updated to reflect the recent 3CD/Blu-Ray deluxe edition of the album.

Another great R.E.M. surround disc. I picked up a used DVD-A for far less than the new Blu-Ray deluxe edition. The version of "Losing My Religion" on here totally smokes the version from In Time.
Last edited: Feb 1, 2019

I'm upping my vote to 10 for this. Definitely the best mixed of all the R.E.M. DVD-As I've heard (which is all except Up and Around The Sun).

I love hearing the Mandolin in "Losing My Religion" strumming away in left rear...

My third favorite REM album (#2 AFTP, #1 Green) and over all I really like the surround mix. "Belong" is stunning in 5.1. The only disappointment is "Shiny Happy People" which sounds very small in this mix, especially the intro. I was glad that the video used the original mix. Over all, I think the non-hits benefitted from surround more than the hits did. I'm not sure why this is, but that is how it seems to me.

Would anyone who has both the DVD-A and bluray care to comment on mix or mastering differences?

When this album first came out in the 90's I always thought the "Losing My Religion" video was cool but it wasn't until many years later that I learned that Tarsem Singh directed the video.

salsdali said:
When this album first came out in the 90's I always thought the "Losing My Religion" video was cool but it wasn't until many years later that I learned that Tarsem Singh directed the video.

I STILL haven't seen The Cell but I liked The Fall (got the BD with the DTS-MA audio - there's one with Dolby TrueHD out there too). That "monkey dance" ripped straight from Baraka (just like James Cameron did in Avatar - come on guys, hire a choreographer to come up with something new) but visually one-of-a-kind, Lee Pace ruled and that little girl did a superb job. Googly googly!

Back to REM, I'd lost interest in them by this stage but have the DVD and still enjoy about half of it a couple of times a year. If I didn't have the DVD already/if I liked the album more, I would have picked up the BD set though.

Found a deal on the DVD-A of this on EBay. (AFTP too). Wow. I probably haven’t played this album all the way through in 25 years. Crazy how fast time goes by. This album came out the year I turned 30, which was a weird time for me. This one really takes me back.

I had been into R.E.M. since Reckoning and this was the album where they really came into their own. It’s not their best one (I like Document and Automatic better) but this one may be their most “of the time” album for me. This album defines 1991 to me.

beyond that? I don’t remember the album sounding this good back then. The fidelity is great. And Eliot Schiener’s 5.1 is very very good.

Now if only I can snag a copy of Document at a reasonable price.
You must log in or register to reply here.