Jan 18 2018
TIM: “Thanks for the update Larry, understood. At your service when the moment is right.”

Nov 17 2018
TIM: “Hi Larry, the years almost finished and I was thinking of you and your work. Any news? We’d still like to have you when you’re ready. Regards, Tim”

I was sitting at this traffic light near D.C. when I looked down and saw Larry replied! 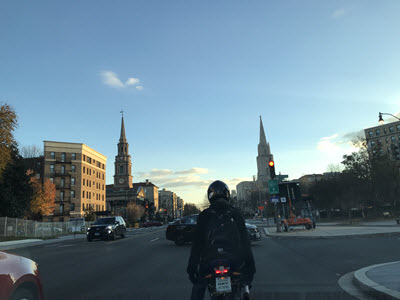 LARRY: "Hi Tim- Apologies for the long silence. It’s been an interesting year with some serious medical issues to manage since late January, but now largely resolved in the last few weeks. And good timing, too because I’ve restructured my record distribution deals which will make alternate releases like surround versions on disc much easier to implement to retail outlets.

As an added bonus, the original studio discreet 4 track production mix of Electronic Realizations recently re-surfaced after having been lost for decades; thought to have been gone for good. The 1/2 inch tapes have been digitized at 24/96 and when treated as a 4.1 mix in my studio, it sounds better than I could have ever hoped for.

With the real possibility of releasing 5.1 mixes of the older Synergy catalog material and some new projects underway, the QQ forum is something I’d like to explore. Any suggestions about the registration process and where do you suggest that I jump in?

Thanks for staying in touch. -Larry”

TIM: “Hi Larry, I’m thrilled to hear from you! Been through medical issues myself. I’m traveling for a few days, I’d like to get you set up on our forum in a designated artist / producer section we have now. People are going to be so glad you’re there. Let me lay the groundwork for this and I’ll be back in touch with you when it’s ready. Regards, Tim”
Last edited: Feb 12, 2019