Please post your thoughts and comments on this re-release of this 1970's Quadraphonic title from RHINO HANDMADE. 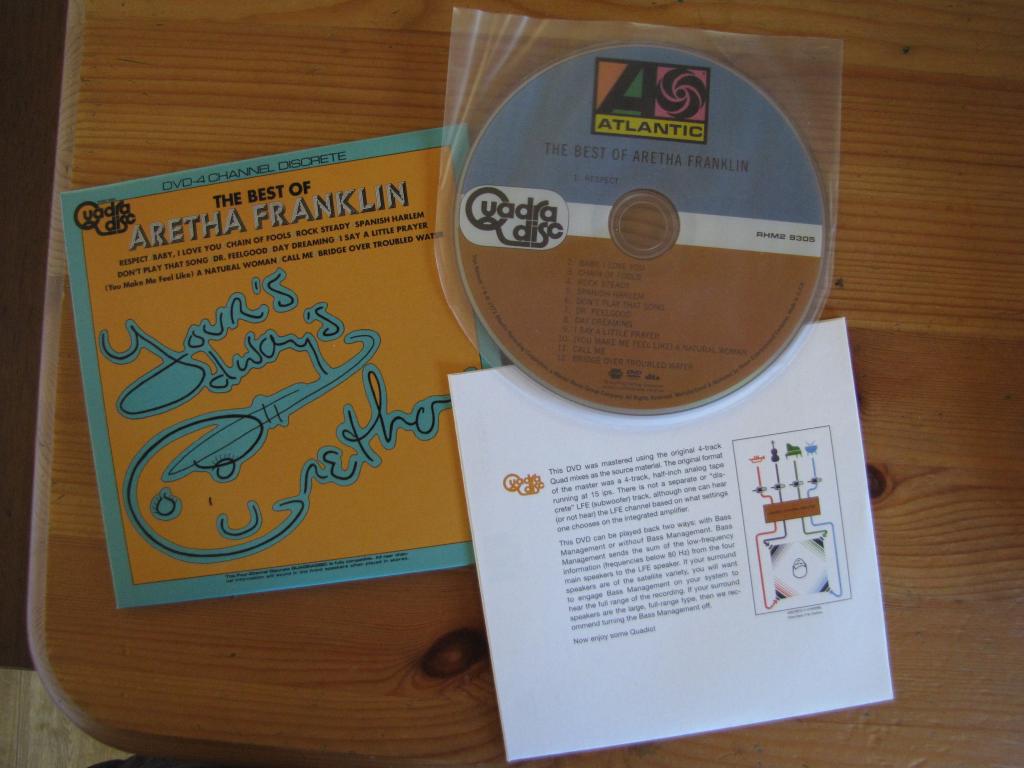 My copy arrived in this mornings mail. I have listened to it 4 times so far and get a different feel with each listen. Reverb is very present, but hey, it was made in 1973 and reverb was the thing then. Rhino must do something about their package, the print is so small that older people like me will have to use some sort of magnification to read the darn back information. I scanned the front and back to print covers for a jewel case so I can get the darn thing out to listen without destroying the package. Other than the package, Aretha sounds GREAT. I will need a little more time before I vote.

I would just like to point out that ALL songs on this disc come from Eight Track Multitracks. I was watching a documentary on Tom Dowd last night and they actually had vintage film footage of recording Aretha! I think the reason some sound more discrete than others is due to how they were recorded. The film footage shows Aretha sitting at a grand piano with a vocal microphone, the drum kit is raised and to her right with a small baffle in front of the kicker drum. Bass guitar (and I believe his floor amp) are in front of the piano in front of Aretha. A guitar player is roughly in front of the bass player to Aretha's left. There may have been someone standing up by the drums with a tambourine. Regardless, everybody playing in the studio all at once would create incredible amounts of track leakage but would give a great 'live' performance feel to the recording.

According to this documentary, Atlantic had been recording to Eight Track in New York as early as 1955. Les Paul had the first Ampex 803? (I think that was the model #) and Tom Dowd/Atlantic had the second.

I couldn't help but think how CRAZY that was that Atlantic had an 8-track machine 12 years or so before they became the norm!! Wouldn't that have been incredible if everybody had jumped on the bandwagon? Buddy Holly recording on 8-track? Elvis? Little Richard? What if by 1960, 16-track had come along? 24-track by 1970!!! Think of the back catalog of Quad possibilities!!

During the documentary, Mr. Dowd himself described how things went with the advent of Stereo LP's by the late 50's. He goes on to tell how most companies were coming up with strange "electronic" ways to create stereo from Mono, and how Atlantic could have made stereo before stereo existed!

I LOVE this release! It's a great album anyway and the quad mix sounds very good, especially in DTS 96/24. The Dolby is 48k and sounds harsher to my ears. Man, I hope they do more like this. Aretha really gets to me and this one is special.

Well I listened to it from the perspective, "Does this sound better than the reel to reel conversion?" and it does...much tighter in the bass...well worth the buy...now, Rhino, AWB please??

First, a given: this is a fantastic set of classic music and performances.

I think the mastering is technically superb, and though some will decry that the engineers left the masters original and did not correct channel placement "errors" (if you even want to call them that), I think the Quad mix is great, especially remembering the vintage of these tracks, the earliest of which dates to 1967 and was NOT recorded in the New York studios but in Memphis, in a much more technically limited environment.

Song selection? "Greatest" is arguable, but at the end of the day most of the big stuff is here. I would love to hear lesser-known classics such as "Young, Gifted and Black" with its big vocal chorus and "Since You've Been Gone" in MC, but I'm more than satisfied with what this album represents, and kudos to Rhino for doing a great job with the mastering and packaging.

I agree that it sounds better than the Q4 conversion, but that's not a knock on the convertor - Rhino has the masters, whereas even the best commercial Quad reel source is still a low-speed consumer-level dub generations removed.

I do think it's a bit odd that the default audio stream is Dolby Digital when the DTS is so clearly superior, but that's a niggle and does not detract from the overall package. Nice job, and I'm very glad to have it!

A must have! I gave it a ten for the content of the material alone, Tom Dowd's mix and Aretha Franklin's singing of course! She is really great as always and I love her. When CDs first came out her music was at the top of my list to buy. It was great that Tom Dowd did the Quadraphonic mix here.

If anyone is having issues with buying through the website, call them to order.

It would have been nice if Rhino hadn't lost my order info. I pre-ordered this one when they first announced it, and when I went on their website to see why it had not yet arrived, it appeared they lost all the information I had put it on the pre-order. So I just had to order it again. We'll see...

ClarkNovak said:
.......
I do think it's a bit odd that the default audio stream is Dolby Digital when the DTS is so clearly superior, but that's a niggle and does not detract from the overall package. Nice job, and I'm very glad to have it!
Click to expand...

I don't remember the Chicago having dolby digital on it. I hope I didn't play it that way.
C

Wow. As someone who's never heard these songs in any MC format, I am extremely! happy with this release. Perhaps not the "grinning idiot" effect that CTA gave me, but still a thrill. Spanish Harlem and Daydreaming are personal faves.

I love how the sounds drift from the fronts to the rears at the start of "Day Dreaming". Vote to come later.
M

Received my copy today and gave it just a quick listen before going to work. These mixes sounds totally different than the stereo mixes. Whether you like them or not is a matter of taste. There is a lot of reverb, and the mix is somewhat "diffuse" On many tracks it is not easy to tell from what speaker a certain instument comes. Compared to other quadradiscs this is not very discreet, but that could also be an advantage. It sounds very much like a live recording made in a studio, and that is also a way of using the quad possibilities. However I think that some will say that you could almost get the same sound playing the stereo album in a surround sound mode. Personally I like the openess of the sound and what is most important is that the music is absolutely fantastic. Aretha reorded during her peak.
Mats
A

I initially got "fooled" by the Dolby Digital track. It was very diffuse and I finally went back to the receiver and realized I was hearing the DD track instead of the DTS. A press of the Audio + on the DVD player and the DTS 96/24 track started-up. The DTS track is much more enjoyable with much less verb.
C

alk3997 said:
I initially got "fooled" by the Dolby Digital track. It was very diffuse and I finally went back to the receiver and realized I was hearing the DD track instead of the DTS. A press of the Audio + on the DVD player and the DTS 96/24 track started-up. The DTS track is much more enjoyable with much less verb.
Click to expand...

Agree, and the bass is distinctly clearer. Funny, because DTS is usually the default in my car so I was listening to DD the first time through.

Totally agree that the DTS is audibly better than the DD stream. Some of Aretha's vocals in these mixes are very "wet", but to me it's an artifact of the times and not annoying at all.

I just got my copy in the mail today (August 24th 2010)... I couldn't wait to put this baby on my main surround system.. Let's just say, once I got to "rock steady", i kept playing the track over and over again. Cranked this up LOUD!! This must be a different alternative take of the track, i never heard this version before. I love this version, and it sounds fantastic in Quad. My only small little complaint is the inherent tape hiss on the transfer. According to the inserts, this was taken from the original masters on half inch running at 15 ips.. Regardless of the hiss, I prefer it over shitty compression and pseudo 'noise reduction' any day! If anyone at Rhino reads this post, PLEASE PLEASE PLEASE Keep these releases coming!! Keep QUAD Alive!!!
K

I like the live vibe. I enjoy the reverb and the spaciousness. The bass is punchy enough. And I feel there is just enough separation between front and back to keep it interesting without it being overdone. Plus, I'm no longer concerned about rumored channel placement errors. I think it sounds good and I'm very happy with this release. Hope to see more Quadio releases from Rhino. (AWB?)

One more thing.. Anybody hear the slight static coming from the Right Rear speaker in the beginning of "Bridge over Troubled Water"?? If anyone has the original release from 73 - would be curious if it was on there as well.

Was getting worried if my pre-order had been dropped also, but it arrived. Love it after one listen through....Yes, the electric piano on daydreaming really moves about and the best version of a Bacharach song ever recorded is on here. What more could you want. Thumbs Up. Now we need to prevail upon Bob to move up the Yes and Allman Brother releases! John S.
U

surroundme33 said:
One more thing.. Anybody hear the slight static coming from the Right Rear speaker in the beginning of "Bridge over Troubled Water"?? If anyone has the original release from 73 - would be curious if it was on there as well.
Click to expand...

I did not notice the static "sound" but I did not like the way Aretha's vocal sound on "Bridge" - everything else on that track is very good sounding but the lead vocal is very distorted to my ears, anyone agree on this? For the comparison I put on the same track from the "Queen of Soul" box set, and it sounded better but the overall fidelity was inferior to the new Quad DVD.

My favourite is Daydreaming - sounds absolutely fantastic in both quad and downmixed stereo (on my new Oppo BDP-83NE, which is the best thing I have upgraded my home rig with for a long, long time)
You must log in or register to reply here.
Share:
Facebook Twitter Reddit Pinterest Tumblr WhatsApp Email Link