Please post your thoughts and comments on this 2018 Box Set release from Kraftwerk, 3-D: The Catalogue. This special box set only release contains 4 BluRay discs and a hard cover book.

The pre-release thread is located here. 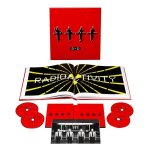 I still remember when I first got this box set. I thought: "well, I am going to listen to a couple of tracks, just to check how it sounds". This preliminary check ended after more than 4 hours... because I couldn't stop, and had to play the whole thing!!! I have to confess that for some songs I greatly prefer the mixes from Minimum-Maximum, but it doesn't matter. This is a great box set, with stunning 3D visuals, a great book with pictures taken in front of iconic buildings, and blu-ray discs with dynamic stereo and surround mixes. I use these mixes when I have friends at home, and want to do a demo of my system.

If it entered the polls today it would be #1

This mix is one one the best atmos I've heard and that goes for DTS:X also

The clearest, the most separation and can't forget those catchy tunes by those "wild and crazy guys"

When ever I watch/listen to this I'm always singing autobahn in my head for days/weeks after.
Last edited: Dec 24, 2018

I saw them live this summer with 3D and surround sound.Fantastic show!

Normally I take a long time to lay out my reviews. Maybe later, but for this one I just wanna say, wow! That mix!

I do not have Atmos, so this is strictly for the 5.1, but this is one of the most active discrete mixes in my collection.

There are a number of things I could complain about. The cost of the box is excessive. I have understood the hard cover book to be useless. These are NOT the original albums remixed (which they do not pretend to be). The disc holders in the box set are a little wonky.

I did wait for more than a year until the price came down to the recent Amazon sale of $119, and that is still alot for me. But that MIX. So clean, so discrete, so creative and well executed. You get it. Bubble bubble bubble.

If you like this band, and you can part with the money, nothing should prevent you from buying and enjoying this music. As far as surround goes, it is excellent. A 10.

Oh, and the holders? As you hold the case upright, printed text upright, you push the disc downwards in the plane of the case (not into the case, but towards the lower edge), and then pull the top edge of the disc toward you. This is the first case I have seen with this sort of holder. No worries. Physical media will be gone in a decade (or less) anyway.

I would give the overall audio and mix an absolutely solid 10, but the music is about an 8 for me. The closest I've come to liking electronica is probably Devo, which I freakin' love!

that says a lot considering a lot of QQ members (relatively speaking) don't really seem to like the content (German electronica. This is no stinking ordinary electronica, this is GERMAN electronica lol)

Anyway it's the production, presentation and atmos output that separates this release from all others.

A lot (massive understatement) more people will like the Content of PF DSOTM but even as good as Parson's mix is, it's not Atmos, and it's not this atmos presented in this release.

1. I had heard of them
2. The Coen Brothers give a nod to them in the Big Lebowski (good enough for me)

While I have the lovely 2018 Grammy "WINNER," Early Americans*, in no way, IMO, does it have the gravitas of Kraftwerk 3D: The Catalogue. NO WAY!

Just picked up the Grammy winner, plus Mass for Modern Man, b/c the title sounds interesting and I've had great experiences with 2L.
Early Americans is $12, before shipping/vat at presto music, btw...

I Know that this music is not everyone's taste but if it were, I thinh it would be in the top 3 of the surround poll.

You have to think what these gentlemen did in the year they did it (the sound, the aesthetics, ....)

I have a 7.1 system and the experience is totally immersive .

Had they released a two disc blu-ray set, at an even more sensible price, you'd have to alter the scale so I could vote. As it is it's just a solid 10.

At circa £100 it seems expensive. You get 4 discs, which, I would for the vast majority of people could be 2. The first two discs are the concerts, the second two are the same concerts just showing the slides / projections. I put the second set of discs on just to have a quick look but it seemed a little pointless - it's the same background images as the other discs (obviously) only missing some of the nice effects that actually used the chaps. I also found the whole visual aspect, while impressive at first, a little monotonous. I may put the telly on for friends to show them some of the cool 3d effects from time to time but that will be it. The rest of the time it will be strictly telly off.

Rather ludicrously I haven't got a lot to say about the sound. I concur with what everyone else has put: discrete, imaginative, almost too clear - excellent.

Then you get a book. Why? I just don't see the point. It's just pictures of the slides. Why are you going to look at that when you have the same images, moving and in 3d?!?!? Perhaps when you just want to look at some slides from a concert? For me it just makes the whole package take up a shed load of room on my shelf and must have cost them a few extra quid to print and package. I should probably just hurl the thing in the bin and leave myself the nice little case with the discs in, unfortunately I can't bring myself to do that.

That minor gripe aside: YOU ARE GETTING 7/8 ALBUMS IN SURROUND FOR c£100! That's insane value. Compared to my recent purchases of single albums (Electric Ladyland, Imagine, Appetite For Destruction, White Album (though that only cost me £30 )) it's absolutely bananas and makes me feel ripped off by everyone else. If you have even a slight interest in this kind of music (like myself) - get it. I suppose you can always burn the book and keep your house warm for a few hours if you want to try and recoup some of the cost.

P.S. Cheers to Fourplay on how to get the bloomin' discs out. Case is as crazy, yet brilliant as the band themselves (once you understand how the darn thing works).
B

I am not necessarily a fan of electronica, but have grown up hearing kraftwerk. While I only own the 1 BD set, the same rating applies. I think this is phenomenal and is an easy 10 for me.

bluelightning said:
I am not necessarily a fan of electronica, but have grown up hearing kraftwerk. While I only own the 1 BD set, the same rating applies. I think this is phenomenal and is an easy 10 for me.
Click to expand...

Heard "Autobahn" on a local radio station a few days ago. So smooth and cool. Neat yet nothing fancy...
B

Got to hear it in surround, though Autobahn is not necessarily my favorite.

I went with the abridged 1BD version as Kraftwerk is not a band I like enough to spend $100+ for. It arrived yesterday.

This thing is mind blowing! The most amazingly active and discrete 5.1 mix. The music is of course ideal for such a thing.

The only other Atmos title that I have is the INXS release. I didn't vote in that poll since I am not set up for Atmos and wasn't sure if my criticisms of the title had something to do with the fact that I wasn't hearing it as intended. But even if I'm not hearing this as intended, it sounds amazing in 5.1.

Musically, I'm not a huge electronica guy, a lot of it is just too repetitive for me. But I find that there's enough here for me that I will certainly revisit it a lot, unlike the Tipper disc which has a great mix but the content left me cold.

And did anyone else notice that you can't use your STOP button while listening to this? (At least that's what's happening with my Oppo.) They're taking "music non stop" quite literally, LOL.

Even if you only have a passing interest in Kraftwerk, this disc is a must-own. It's demo material. 10.

privateuniverse said:
And did anyone else notice that you can't use your STOP button while listening to this? (At least that's what's happening with my Oppo.) They're taking "music non stop" quite literally, LOL.
Click to expand...

Yes, the STOP button doesn´t work. About the Price, you get all the discrography. I think is not expensive.
F

While it's kind of the whole discography, many of the tracks are significantly shorter than the originals. That and the price puts me off.
D

I'm not a big Kraftwerk fan but the reasonable price for the one disc BD I took a chance. (09/17 The sound is incredible, one of the best discs I have heard and the 3D is fantastic. I'm tempted to get the big box.
Edit at 21.14hrs, I ordered the four Blu-ray box earlier. Temptation made me press the buy button. Wife approves, so she'll probably buy a handbag .
Last edited: Jan 16, 2019
You must log in or register to reply here.
Share:
Facebook Twitter Reddit Pinterest Tumblr WhatsApp Email Link