This is one of the more enjoyable Enoch Light quads. Good agressive surround mix as usual. The music selection and the arrangements I found very enjoyable, a cut above some of the others. I am a big movie music fan so am partial to such music.

This is one is, as mentioned before, a largely aggressive quad mix and the arrangements are very pleasant indeed. Nothing is being challenged here; that's not the point. The point is fidelity and throughout whenever soloists emerge from the mix they are given tremendous space to breathe, Enoch's spotlight casting a glowing halo around the instrument in focus. The 'Theme From Sunflower' for example, carries a guitar solo in RR and a flute solo RL that are lovely, lifelike and pin sharp. No mention of who was the session drummer but whoever it was did a great job, some great fills and staggered timings happening discretely here and there. I'm pretty sure Patton, Airplane and M*A*S*H were 'Hit Movies' but the others I am not so sure. It's a solid 9 for the mix but the material is lacking a bit so I'd give that a 6. I'll split the difference on the lower side here to give it a 7. To be fair the version of the 'Patton' theme here is hands down awesome and worth the price on it's own. I had it turned right up and it sounded huge.

My copy is QS, typically for Project 3 it's labelled incorrectly on the outer sleeve. 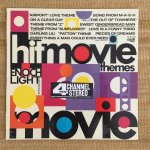 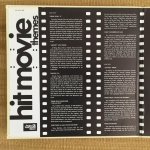 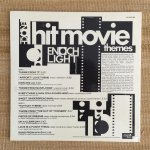 Yes, Light's Project 3 albums--as with his previous label, Command--offer wide separation and very fine mixing; the only knock anyone could make is that this sort of thing could be considered a lofty variant on elevator music, but it certainly was mixed and presented well, can't imagine any fan of quad having an issue with the mix and sound quality.

Of the films sampled, the ludicrious, turgid AIRPORT turned out to be the biggest box office hit, PATTON an Oscar-winning 'prestige' picture the Academy always preferred to honor over less serious fare. Robert Altman's M*A*S*H probably holds up best (certainly more so than the TV series derived from it) and certainly its theme the most recognizable track here. The rest did modestly well (Costa-Gavras' political assassination thriller, Z, was one of the year's better sellers as an import), while DARLING LILI was the latest of Julie Andrews' expensive and lavish films not to earn back its cost (not that she was at fault, really). As for Streisand and ON A CLEAR DAY YOU CAN SEE FOREVER....even she couldn't put much life into it.

All things considered, Light did what he could with the themes at hand, and you'd know when the album was released just by the contents alone.