Released in July, 1973 at the height of A&M's commitment to quad, Foreigner saw Cat Stevens producing himself for the first time, and moving in a slightly more R&B direction. Notable for the 18-minute side-long Foreigner Suite, the album didn't receive favourable reviews at the time despite reaching #3 in the US charts and going gold. It yielded only one single, The Hurt, which barely scraped into the US Top 40.

Most of Cat Stevens early albums are fake quad, but this is one of the few that features a genuine discrete quad mix. 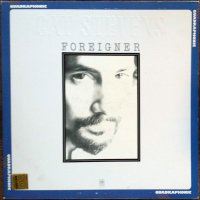 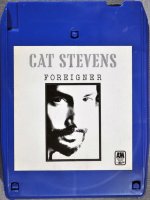 Just popped my Q8 in as I didn't remember much about this one. The "Foreigner Suite" is a really fun and engaging piece of music - it kept my attention for the entire 18-minute runtime. Supposedly Coldplay plagiarized a section of it for their hit "Viva La Vida"? I didn't notice any resemblance.

The quad mix is quite good as well - the rears usually carry the rhythm section (stereo drums!) and backing vocals, while Cat and the piano are upfront. One thing I will say is that if you want to hear this one properly, go for the Q8. Unlike at CBS, A&M's engineers didn't mix their quads to take advantage of the SQ matrix and as such the LPs decode rather poorly. I A/B'd the Q8 with the SQ LP through my Tate decoder and it's no contest. Going with an "8" overall.

According to some industry insiders I've communicated with, it was a horrible decision by A&M to let Marv Bornstein be the one to do the A&M quad mixes. Somewhere in the forum is a thread about this and his philosophy on creating a quad mix.

Needless to say, although this is one of the better A&Ms (on Q8 anyway), it's nothing to write home about, although I do like them music in "the Suite"

JonUrban said:
According to some industry insiders I've communicated with, it was a horrible decision by A&M to let Marv Bornstein be the one to do the A&M quad mixes. Somewhere in the forum is a thread about this and his philosophy on creating a quad mix.
Click to expand...

I think Bornstein & Chiate were capable of doing a solid quad mix - The Carpenters' Now & Then, Joan Baez's Diamonds & Rust, and the three Rick Wakeman LPs are all pretty good. However, my personal favorite A&M quads happen to be the ones not done by them - Quincy Jones' Body Heat and You've Got It Bad Girl (mixed by Phil Schier) and Joan Baez's Come From The Shadows (mixed by Norbert Putnam).
You must log in or register to reply here.
Share:
Facebook Twitter Reddit Pinterest Tumblr WhatsApp Email Link