11 It's THAT GOOD!! This album helped alleviate the sorrow I had when Cream announced they'd be splitting up. I own an SQ, Q8 & CD of this. Why Don'tcha, Out Into the Fields, Third Degree, Turn Me Over, Rollin' Jack and Pollution Woman are spectacular tracks. They did a great job with the mix, considering that it's three guys. AN ESSENTIAL QUAD! 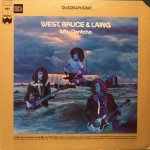 I didn't feel sorrowful at all when Cream called it quits but then, I'm not much of a sentimentalist, I was among the few who thought the Beatles did the right thing by moving on when they did.

Good album and mix here, but I preferred West with Mountain more than with this ad-hoc trio. The material here is okay but not particularly strong, though the musicianship is exemplary, of course.

What I never understood was why Bruce just didn't assemble a crack band and really go out on his own. Yeah, he made some very interesting solo albums, but that's what they were, really; what he needed was a group that would keep him on his toes, so to speak.

did this ever make it out on one of the "Robin" reels, or is a transfer of the SQ or Q8 the best we're gonna get now..?

maybe Sony Japan will do an SQ-encoded BluSpec CD...

Nothing wrong with an SQ transfer!

oxforddickie said:
Nothing wrong with an SQ transfer!
Click to expand...

oh no! not with the technology you guys are using now, they're vastly improved on the old days. the reels still tend to be the best sound to my lugholes though.. plus I'm not a big fan of the deficiencies of the 8 track format, which become more glaring in a pristine transfer to a DVDA/SACDR.

Yes, the 8 track is starting to sound the worse for wear nowadays, quality wise. By the way, this title may well appear in the future...... ;-)

oxforddickie said:
Yes, the 8 track is starting to sound the worse for wear nowadays, quality wise. By the way, this title may well appear in the future...... ;-)
Click to expand...

The music on this record has grown on me over the years. I really like Jack Bruce's vocals especially and he's a standout here, of course. The quad mix is a lot more active than I expected, so overall I went with a "9" on this. Highly recommended for blues-rock fans into quad!
---------- Chris
You must log in or register to reply here.
Share:
Facebook Twitter Reddit Pinterest Tumblr WhatsApp Email Link