On the Q8, "Uncle Salty" and "Round and Round" are switched to even out the timing.

10. Great toons, great mix. I prefer listening in hi-res on the SACD, but this is as good as Quad rock gets.

Honey was the words I said. 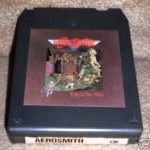 I like ROCKS for the more adventurous mix, but this one's very solid; an '8'. If these guys coulda written songs as strong as Mick & Keith, would be a 10.

I prefer Rocks, as well, although You See Me Crying is my fave early Aerosmith track. Unlike most folks, I like lots of the stuff after they reunited.


Ed Bishop said:
I like ROCKS for the more adventurous mix, but this one's very solid; an '8'. If these guys coulda written songs as strong as Mick & Keith, would be a 10.

The interesting thing about the early years of the band is that, while they did have a few Top 40 hits, until the rerelease of "Dream On" in late 1975(this time album length, not that hideous '73 edit/mix), they didn't have the 'big one' on radio. "Dream On" and "Walk This Way" are classics now (of a sort), but there were other singles pretty much ignored at the time, and "Sweet Emotion" which did good business, didn't do as well as it deserved. Did get to see these guys a few times in Boston, and what I liked was that they played with a strong party vibe: as if they were already buzzed before they got to the stage, kept it going during the show, and continued long into the night. They understood the Rock'n'roll heart, however sloppy their playing could sometimes be.