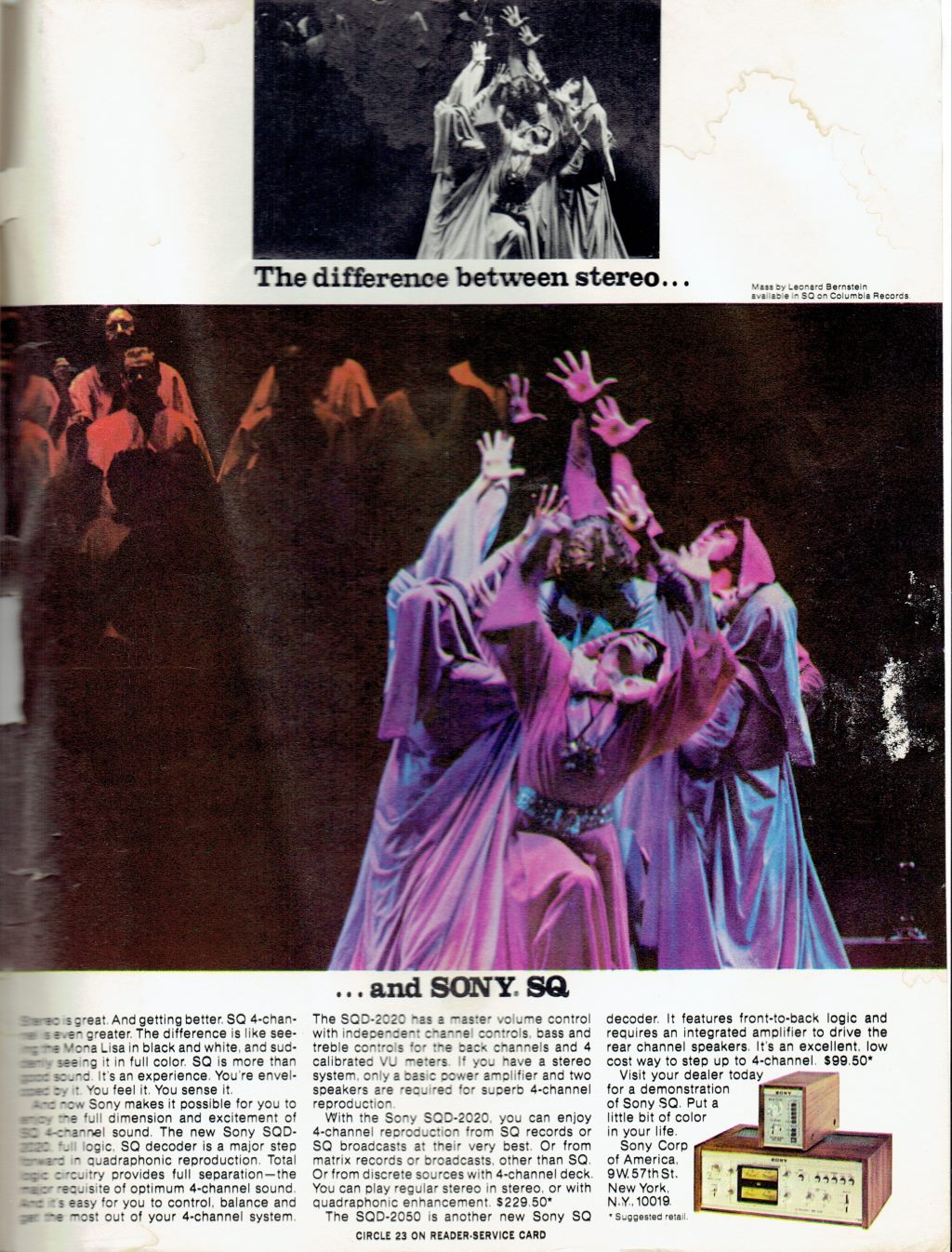 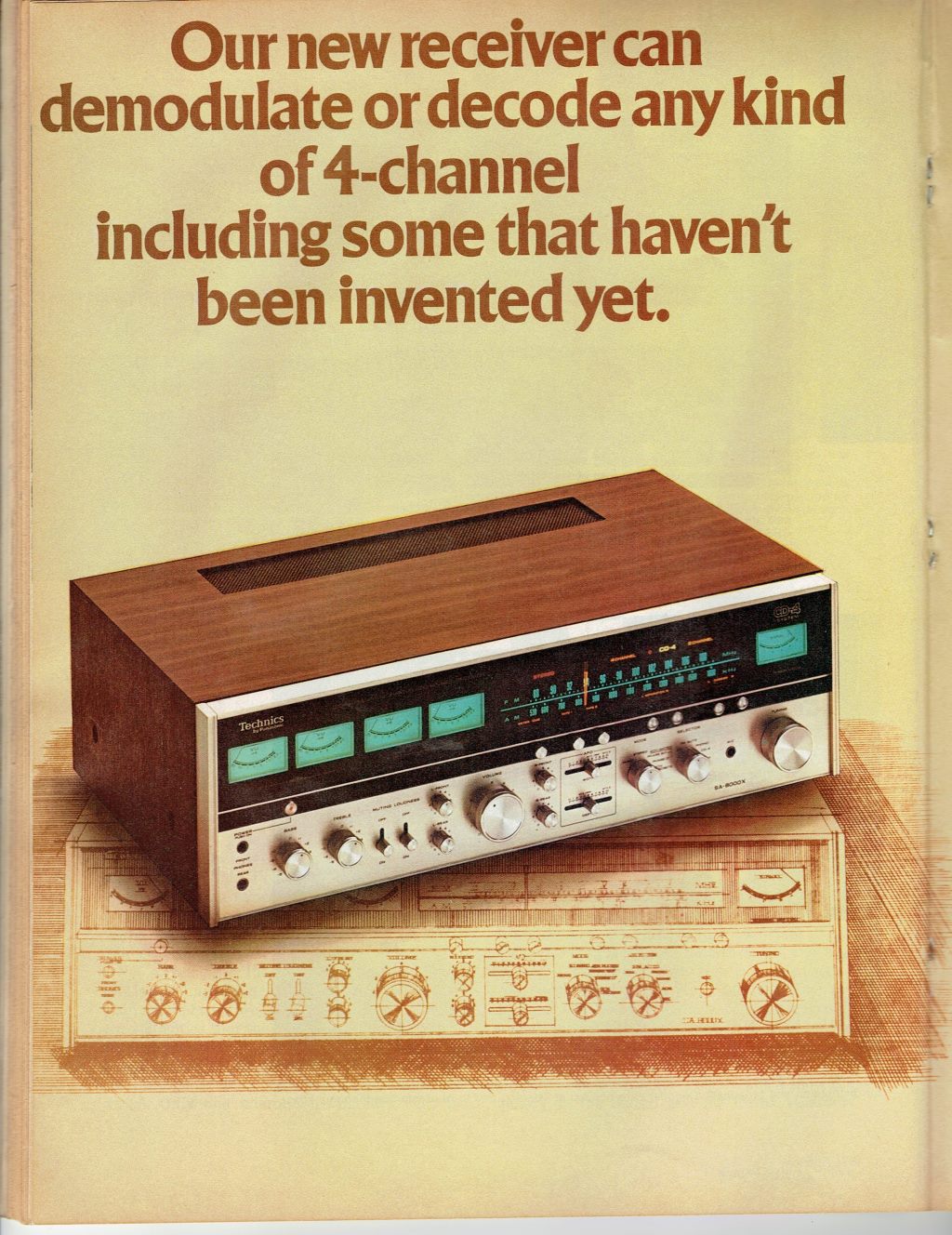 And finally an ad from Vanguard! Didn't see too many of these! 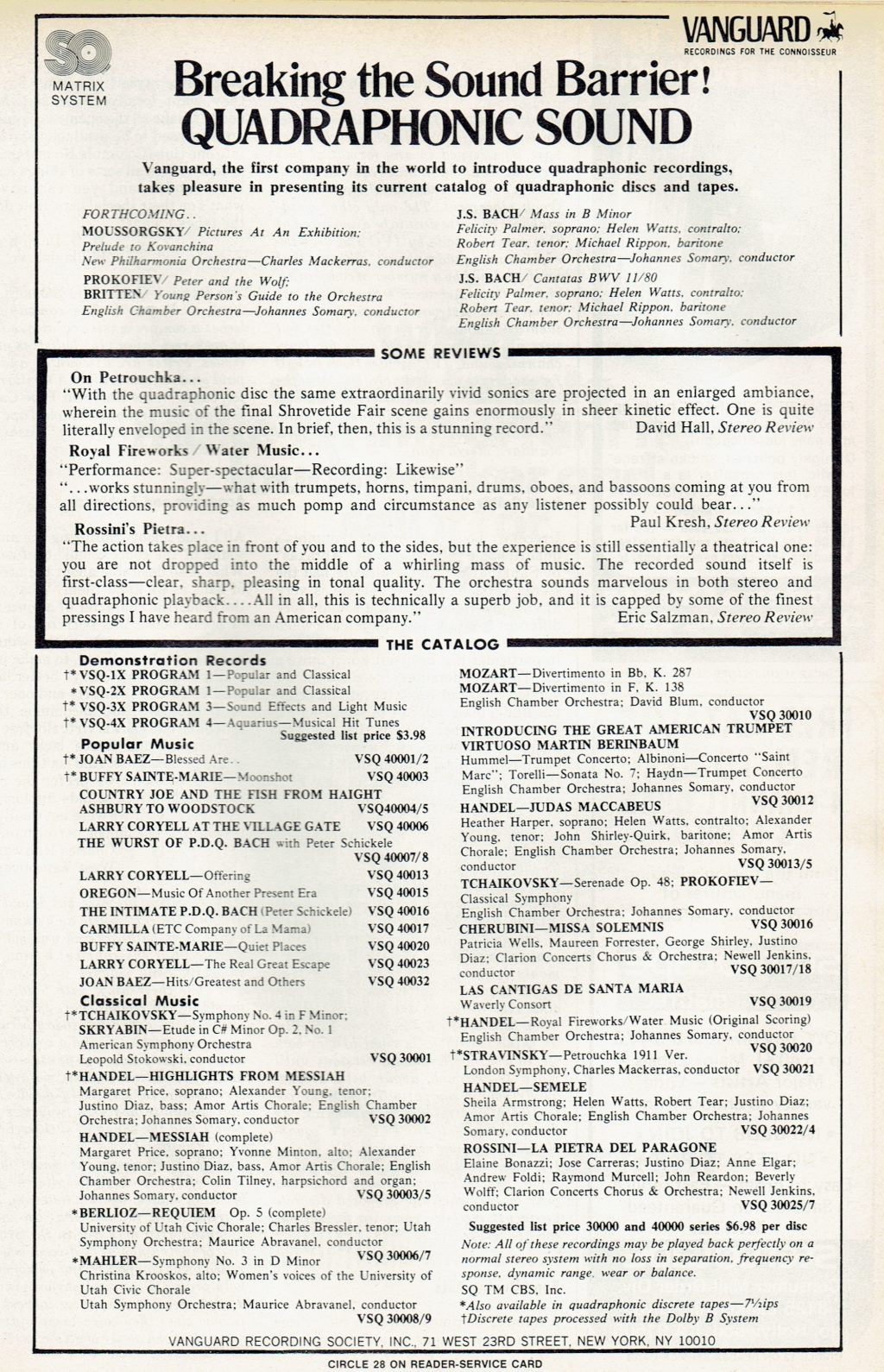 I never knew PDQ Bach was mixed in quad! That has the potential to be pretty fun. Anyone have it/heard it?

I wish D~V would release the three Larry Coryell QUADS, the Oregon and Joan Baez QUADS as well as the Country Joe and the Fish QUAD....and of course the Peter Schickele PDQ Bach!

JonUrban said:
And finally an ad from Vanguard! Didn't see too many of these!

Me either. Don't think it ever came out.

Here are a few more: AKAI 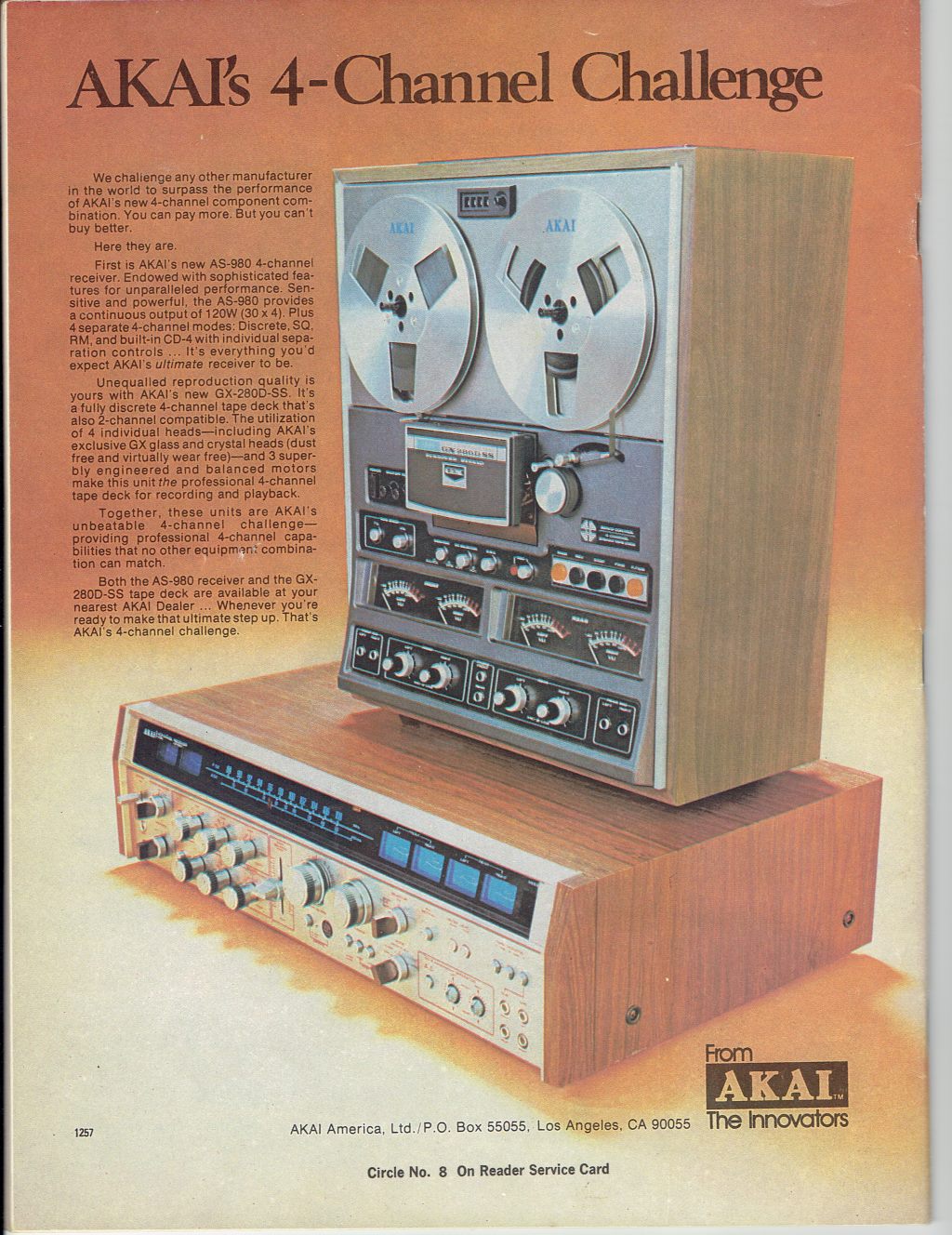 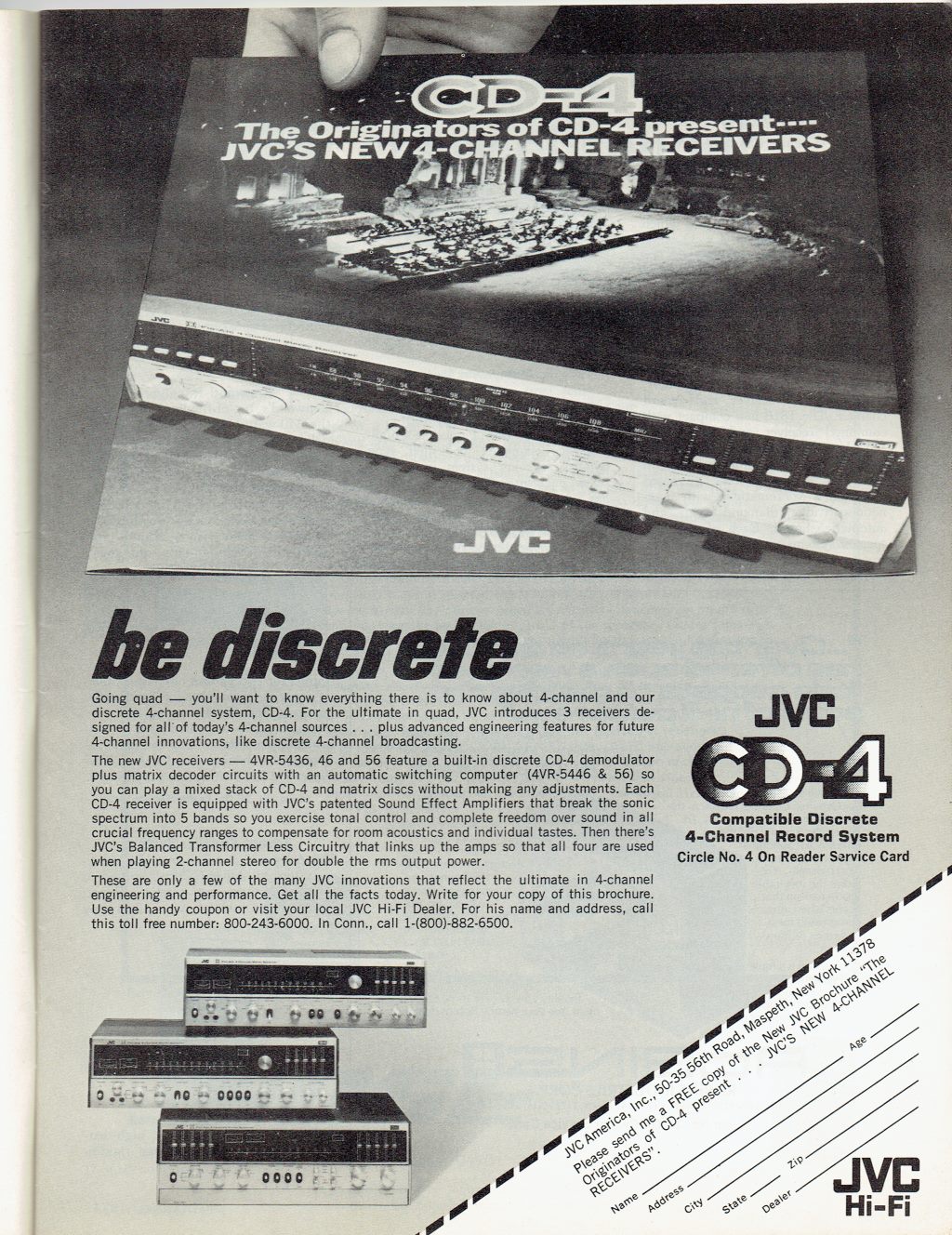 Harmon Kardon - don't see these around much at all these days: 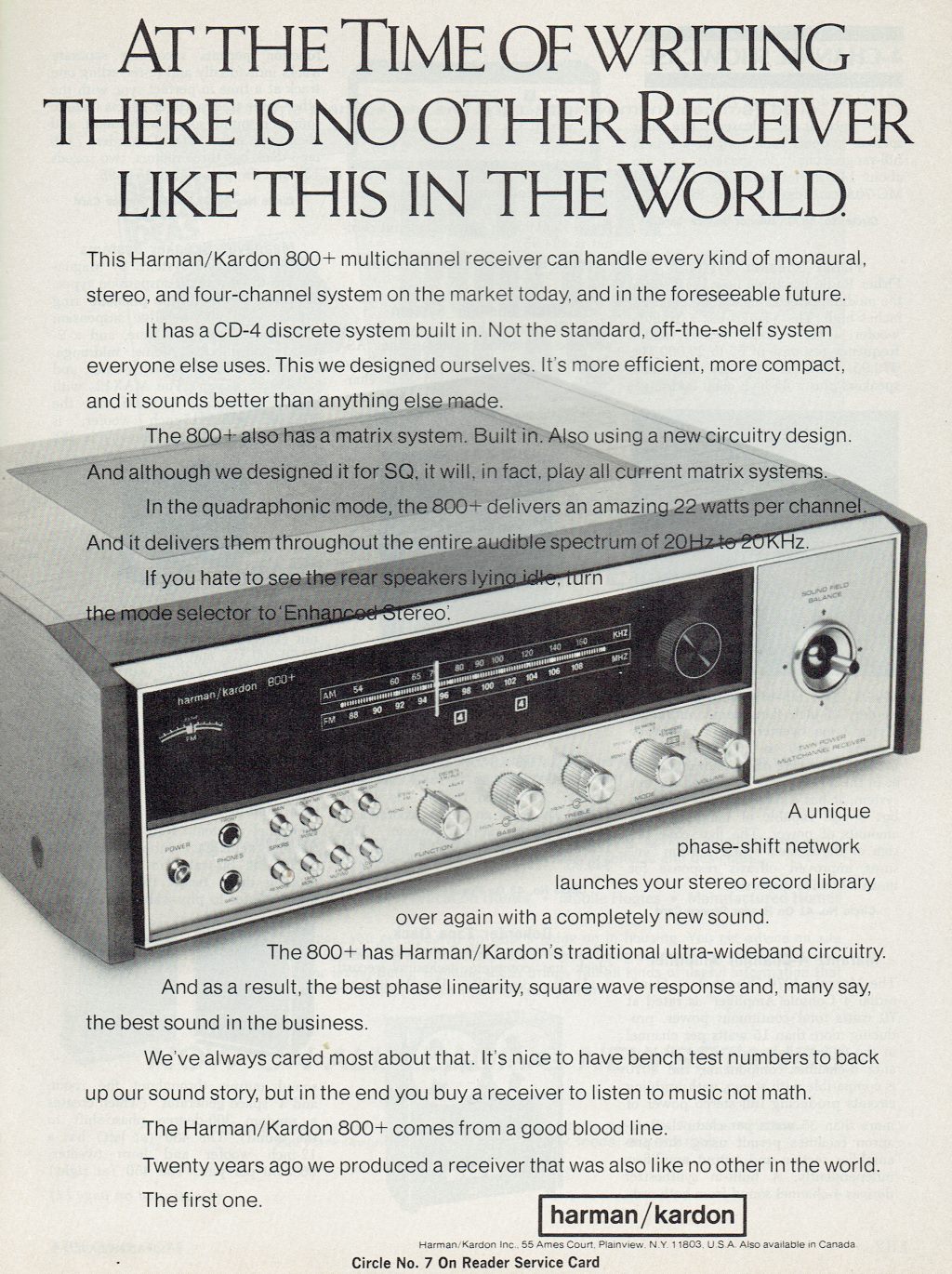 And although this one's in rough shape, still interesting to see: 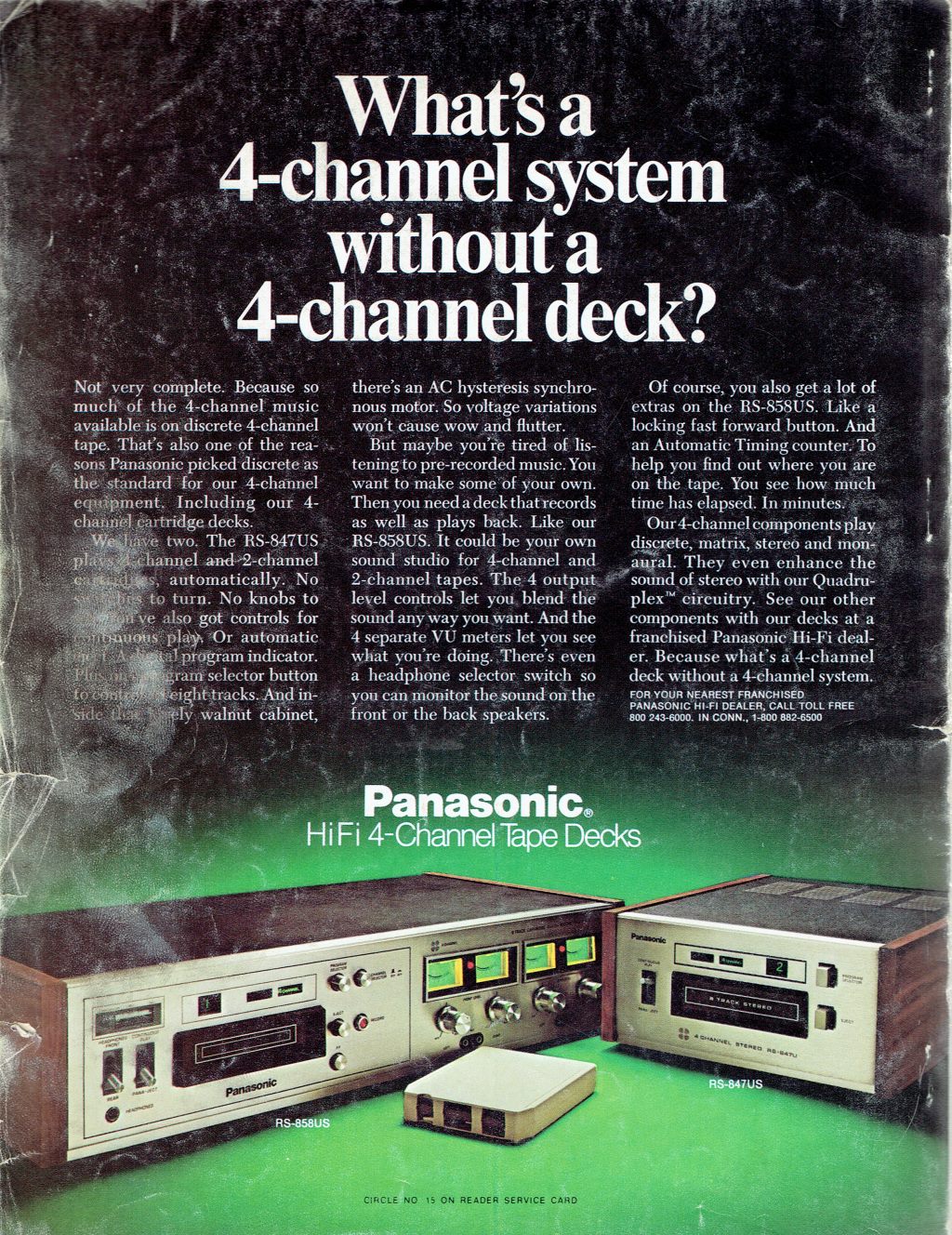 Welcome to the forum

So good. I don't remember the model numbers of much of anything from back then that I bought at PX's and military audio shops overseas. I had several Kenwood Quad receivers (one cost me $555 military price and had a plug in CD4 unit), Technics & Kenwood cassette decks (stereo of course), a Panasonic Q8 with recording inputs, a Sansui or two, Thorenz TT (TD125??) Audio-Technica cartridges and shibata style stylus, Infinity 1001 and other speakers, a bunch of stuff that I ultimately sold before separating from the Army. Dropshipped all to Tampa, some stuff was missing but don't remember what all, I'm guessing everything over 200# they just kept for themselves. That's just how it was and I wasn't going back for it!

JonUrban said:
A Panasonic bundled system. They did sell quad like this at one time, for those who were not around.

I have a RE 7844 coming to me and what is the difference between these and it?

In 1970 I had a catalog titled something like "how to buy a stereo system". They set up systems at different price points. The equipment they suggested were dual turntables, dynaco speakers (The A 25 was a best buy) and your typical receivers of the time-Pioneer, Sansui, Marantz etc. I read it cover to cover. My fav stereo catalogs were from Warehouse Sound in CA (Remember "Brillo Bob")? They put together fantastic systems at different price points including some ultra expensive Quad systems. Employees would take various components home and assemble systems that worked well together. Jbl speakers were big at warehouse sound. I loved stereo mags at the time and have a large collection to this day. When I was dating my wife (she was a prom Queen) she was having trouble finding a guy that wasn't into skin mags, I didnt know it at the time, be she discoverd a bunch of mags in my closet and she said "oh no not again" until she noticed they were all stereo reviews and flyfishing stuff. She married me!

I love all these old advertisements, fascinating equipment that completely eluded me back in the day. I wonder why? I wonder if I thought it was a novelty, nobody I knew had one so I never got to experience and probably when I went to the stereo store it was presented to me but just couldn't afford it at that time of my life? I did have a Marantz stereo receiver in the 70's.

Surprised that I've never explored this thread before.

I sold all of those lines depicted, except Sanyo and Fisher. In the 80's, I was sales manager for the exclusive Sanyo distributor for 5 states. Lots of Beta. We also distributed Panasonic, Magnavox, etc. Discussion of the *80's best left for later...

We also had some great closeout deals on the old '72/'73 JVC black Quad receivers. they preceded the silver & black line depicted in one of the ads here. Built in Eq.

Currently, SQD-2020 and both Technics/Panasonic Quad decks depicted are in use on my systems. So is Akai CR-80-DSS.

Did anyone have issues with Dokorder? We sold them for a week or two, and sent every one back, including our demos. More than half of them had a repair issue instantly. The ones we sold all were boomerangs. Sorry, we have no intention of paying this invoice.

Teac had 2 and 4 channel decks that had suspended meters, too. These preceded 3340, etc. I can't remember the #'s of those, although I recall posting pix somewhere on QQ. I sold a great deal of Teac Quad reels.

Saw/Heard PDQ Bach live w/CSO. I have those SQ PDQ LP's. He also has many Dolby Surround CD's on Telarc. Love Prof. Schickle!

We had that "blown away" Maxell poster in our tape dept.

Pioneer, JVC, Sony, Marantz all had their midwest warehouses in the next 'burb. So, we'd pick up special orders at lunch. Sometimes, our reps would drop them off.

Caveat: This is all from memory, no research.

Don't get me started on announced, but never released Quads...

1- I'm a huge fan of Oregon. What a pain to see Another Present Era & Winter Light announced as being currently avalable, though never released. I seem to remember their LP w/Elvin Jones, Violin & Oregon in Concert listing never-released Quad LP #'s on the back of their album sleeves, too. At least we did get an actual Quad of their Second Vanguard album. Saw/heard Oregon at the Blue Note on 4th street in NYC. We sat at foot of the stage. McCandless was impressed that I knew his name. DeJohnette was in audience.

2- Some Baez (again Vanguard) albums listed Quad #'s that never came to be on their back covers. I recall David' Album being one.

3- Dylan's Greatest Vol. 2. I have an immense Zim collection. Still, a few of those 60's acoustic songs may not have translated to Quad. Inner sleeves advertised it.

4- Horowitz Plays Scriabin. Advertised in mags as being available in Quad. Never happened! I suppose that hall effect is all you could get from one guy and his piano, even a virtuoso.

5- Minstrel in the Gallery. I waited for a Quad until summer of '76. Bought it and Too Old on 2ch LP's at the same time. I realized that these Quads might never materialize. BTW: I'm a Tull completist. I guess One of these Nights, Hissing of Summer Lawns & Best of Carly Quads were sounding the death knell of Quad: 2ch sleeves w/CD-4 stickers.

6- Boston & Foreigner. Although I don't recall announcements for Quad releases of these, I held off buying them because "something that big would be released in Quad." More great stuff I waited to buy until released in Quad.

7- Coney Island, You Smile - Herb Alpert; and Cat Stevens' Numbers. A&M never released them, since these albums were "stiffs," as a friend in the record business referred to them. They didn't sell.

IMHO, You Smile is one of Herb's Best. Just came out on CD in last few years. Get it!
BTW: got a promo kit w/t-shirt for and mobile for You Smile. Wore the shirt when I met Herb backstage on Bullish tour. I joked that it was new, but Herb laughed. Also got a promo kit w/mobile w/my promo LP of Crime of the Century in '75. Yes, Margaret, we'd all love to see a surround Crime...

Magic of Majiks is perhaps the only stand out cut on Numbers. Yet, I bought it on LP and MoFi Gold CD in Cat Stevens Three box.

While I had the scanner out, I went back through my copy of OFF DUTY '77 and scanned a few more interesting (to me) pages. Nothing spectacular, but here's a view of the Shure M-24H ad, the page of Sansui receivers available (with my copious notes scrawled all over the page), and finally a scan of one of the price sheet pages, the one with the receivers. So, some of you might find these interesting. Going through the mag, I did not see anything else that stood out as particularly worthy of inclusion. 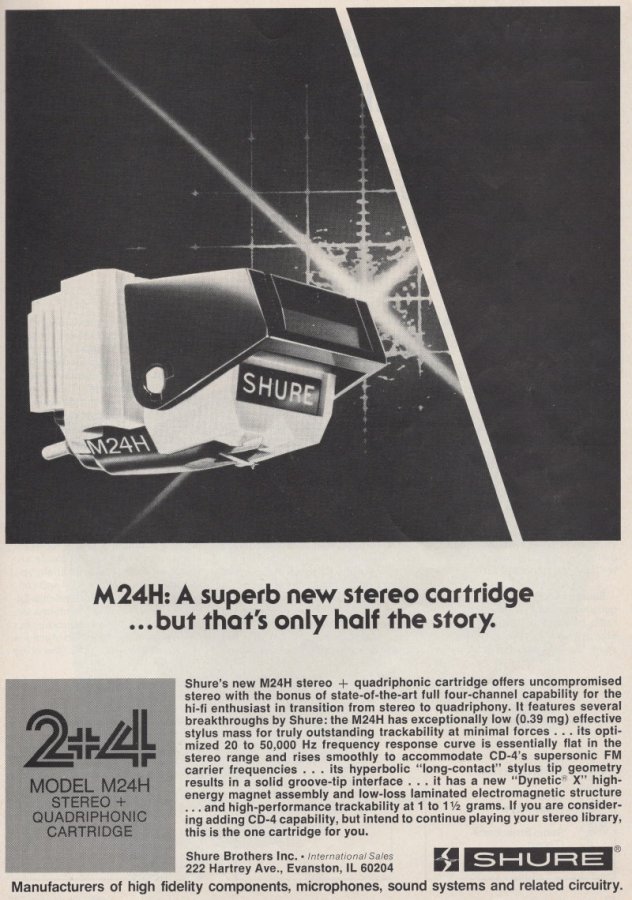 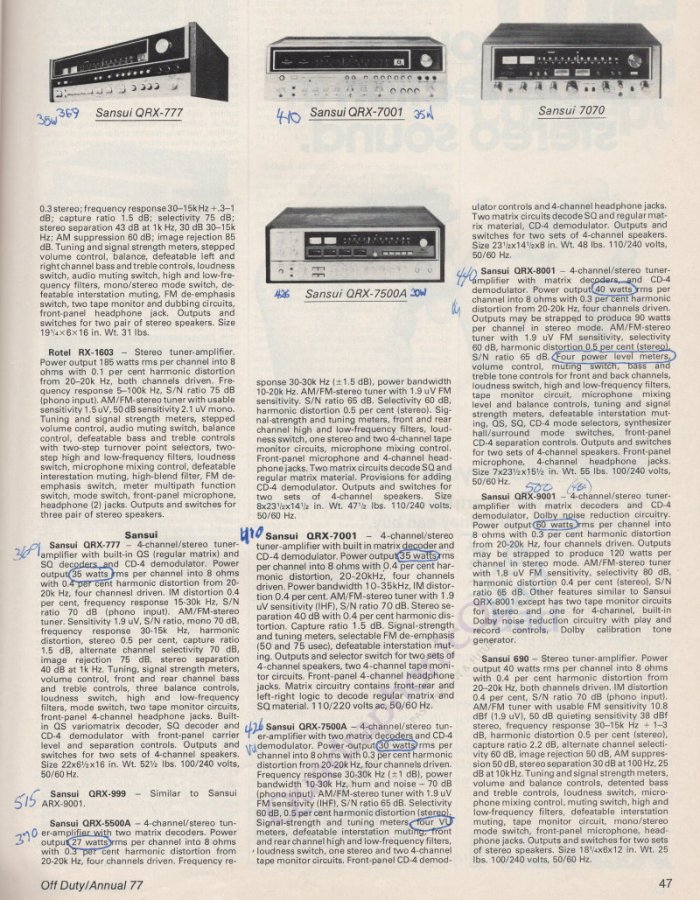 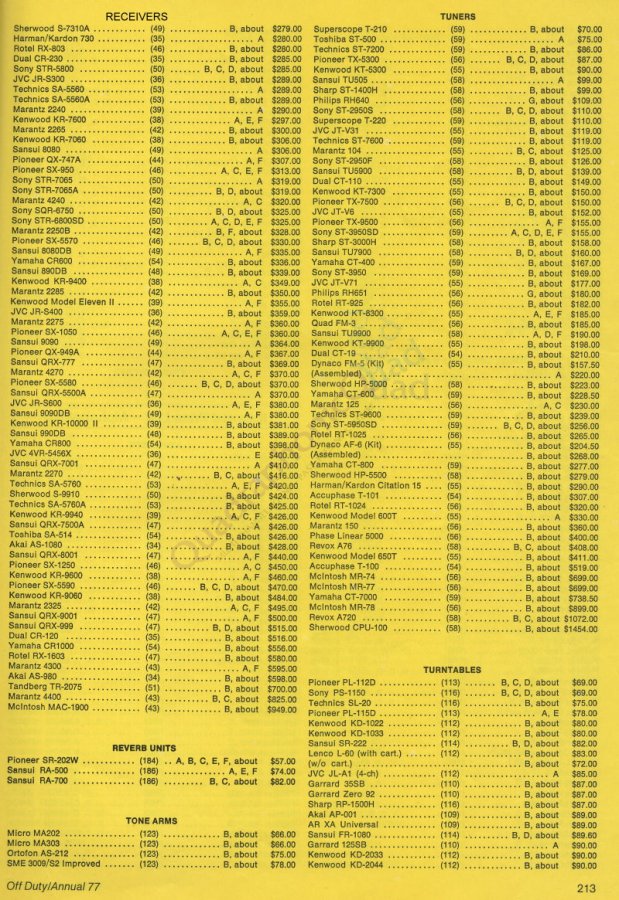 Back then, if there was ever ANY article or advertisement with the word "quad" in it, I read it. I was disappointed several times when whatever it was was about "Quad"