I am still very much trying to process how I feel about these Isley Quads (they are tough nuts to track down, I'd only heard all but 3+3 up until last year) but I can tell you that whatever else is going on with Live It Up and Harvest For The World (I feel they are in part upmixes/fake mixes) the Quad of Go For Your Guns is a genuine set of remixes (you can tell right from the very first track where the handclaps are much more prominent and forward in the mix than in the stereo..). More to come!

This is the first Isley Brothers album I've seriously listened to, and I love it! The only thing I heard from them prior to this was the quad mix of "That Lady" on AF's The Collection SACD. It's short, but there's a perfect balance of uptempo funk numbers and killer slow jams, plus some seriously fiery guitar work (the internet tells me Ernie Isley learned from Jimi Hendrix).

The quad mix is fantastic (I'm listening to the SQ LP through a Tate). I believe it's one of the last credited to Larry Keyes, one of CBS' main quad engineers. Drums, bass, lead vocals, and guitar solos are across the front, while the rears feature handclaps, backing vocals, and rhythm guitars. The lead vocals are always front center, with one exception: "Climbin' Up The Ladder" presents the double-tracked lead vocal on what sounds like a time-delayed split between the front and rear. It's hard to explain the effect, but it's really cool.

"Climbin'" is pretty awesome, but the most impressive use of surround is in the track "Voyage To Atlantis". The lead vocal has this huge reverb effect that hits the rear speakers. It's not just an ambient echo, it's a directional effect that you can feel travel through you from front to rear. I had previously thought that it's impossible to do reverb in an SQ-encoded mix (most CBS quads are totally dry), but it seems Mr. Keyes cracked the code by 1977. I wonder what other advanced surround mixing techniques would've come out of CBS had their quad program continued past '77.

I give it a 10. It's a real shame this one is so hard to get- the SQ doesn't pop up much and the Q8 is pretty much unobtainable. A reissue of this from the master tapes would be absolutely stunning.

fredblue said:
I am still very much trying to process how I feel about these Isley Quads (they are tough nuts to track down, I'd only heard all but 3+3 up until last year) but I can tell you that whatever else is going on with Live It Up and Harvest For The World (I feel they are in part upmixes/fake mixes) the Quad of Go For Your Guns is a genuine set of remixes (you can tell right from the very first track where the handclaps are much more prominent and forward in the mix than in the stereo..). More to come!
Click to expand...

having scrutinised them more carefully, i have since wised up and revised my view of the Live It Up & Harvest For The World Quads, i believe they are the real thing and this GFYG Quad is as awesome as sjcorne says and the best Isley Quad mix that saw release imho. its a "10".

Okay, granted: a post like this doesn't really belong in any poll thread, but partly I wanted to draw attention to the fact that the polls for this fantastic album and for Live It Up don't yet have enough votes to be visible on the charts. So...do your duty, QQ members!

But to the business at hand: on his Bullseye podcast, Jesse Thorn recently re-ran an old interview with bassist & guitarist Ernie Isley, who joined the family band in 1969, just in time for their amazing run of hits (and quad albums) of the 1970s. Listen to it here:

We're looking back on Jesse's 2015 interview with musician Ernie Isley of legendary The Isley Brothers. Ernie talks to Jesse about the evolving sound of The Isley Brothers, a life-changing gig playing drums for Martha and The Vandellas, and what it was like to grow up with Jimi Hendrix...

Thanks for bumping this thread @humprof - sadly I think the lack of poll votes is a reflection of how difficult this title is to find in quad, seeing as it was part of the last batch of CBS quad releases at the end of April '77 along with RTF's Musicmagic and Maynard Ferguson's Conquistador. As @fredblue and @sjcorne have said above, it's a fantastic mix - Larry Keyes' last quad mix and every bit as good as any of his best. I can't reccomend this one enough, and I think musically it's the band's highpoint - there isn't a bad track on the album.

And speaking of Ernie Isley, it's hard to overstate how pivotal he became to the band's later success. When he (and bassist Marvin Isley and keyboardist Chris Jasper) became "official" members of the band in 1973 (with the 3+3 album), the group became a self-contained unit and the three younger Isley members not only played all of the music on those albums (which came out an an album-a-year rate through 1983's Between the Sheets) they also wrote all of the original material between themselves. Ernie himself not only played all the amazing lead and rhythm guitar on those albums, he also played the drums on the lion's share of the material as well.

If you're reading this and can get ahold of Go For Your Guns, or any of the Isley's quad mixes for that matter, don't hesitate - they come with my highest reccomendation.

I quite like this one. It's not super-aggressively mixed, but it does feature a good front and back soundstage. It's definitely not your run of the mill Columbia-style four-corner mix.
I'd like to think this is what Quad mixing would've evolved into had the engineers not been limited by the restrictions placed upon them with the SQ or QS matrices. Quad was often criticized for illogical placement or the complete lack of mixing technique.... this is quite the opposite. Even the opening track "The Pride" has lead vocals front center, backing vocals everywhere. Bass & Drums solidly up front. Lead instruments in the front corners, rhythm parts and handclaps in the rear. No silent channels... no gimmicks. A very logical and well thought out mix. 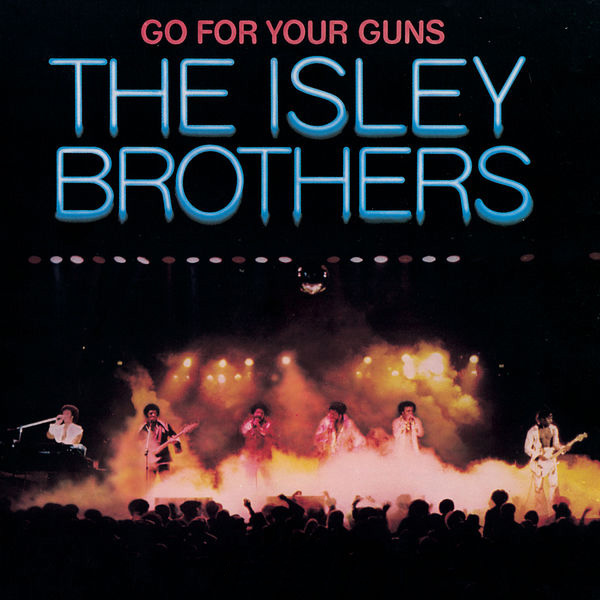 This is a Funk/Rock masterpiece as far as I'm concerned and the mix is what I consider pure Quad nirvana.

Credits per above list:
Guest Musician
The order of songs is actually different on the T-Neck ‎– ZAQ 34432 - Q8 are as follows: 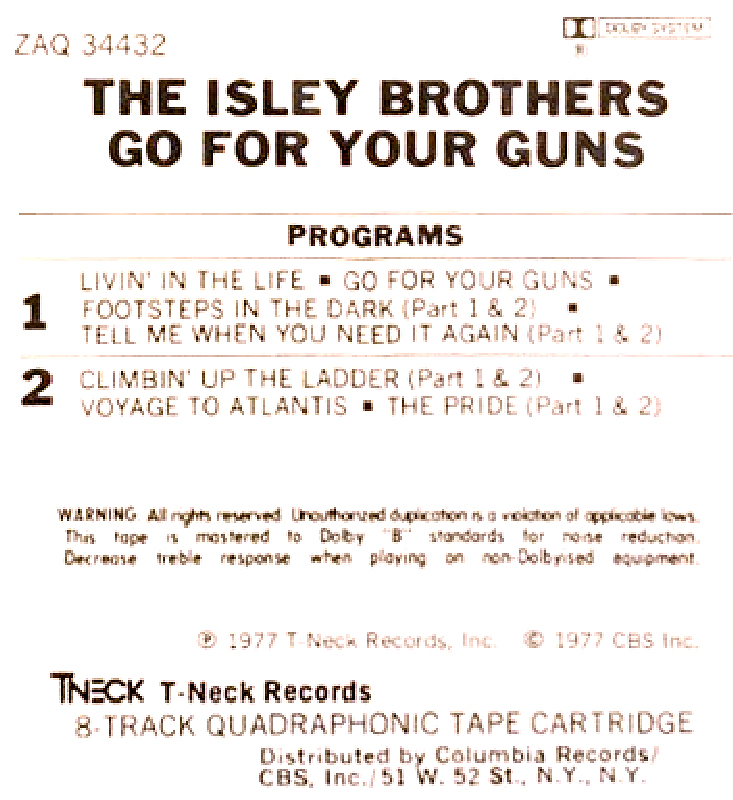 As far as the overall sound on this; (to me anyway), it sounds like a Big Dance Hall sound, at least on the Quad mix. Really a kind of live feel, but with an effective studio mix that fits the style of the music well.

Jimi Hendrix was part of The Isley Brothers around 1964 for a short while, and Ernie didn't join the band until around 1971 (Hendrix left us in 1970.) But Hendrix had a lasting effect on Ernie and you can really hear it in some of the riffs and lead guitar on this release.

Some of the stand out elements of the mix for me include:
(overall Phantom Center was so good it sounded like a Center was active)

01 - The Pride (Part 1 & 2)
-what makes this so Funky, is a technique used on this song in the mix, as an example- The Guitar (or high Bass) slaps, first start a couple of notes in the center imaging and then answers with a couple of higher slapped notes in the Front Right. Very subtle, but very effective. And continuing with that same funky groove, an electric piano is doing something similar as a question of one type of sound in the Front Left and then the previous Guitar/Bass slaps answer. Then later another electric piano comes into to the Rear Right and lays down another funky continuous line. Also dispersed within these beats are hand claps.

03 - Tell Me When You Need It Again (Part 1 & 2)
-Starts off with an effect on the bass guitar (maybe wah wah) in the Front Left and a Guitar riffing in the Rear Left; Congas in the Rear Right.
Another guitar riffing with more distortion in the Front Right & Rear Right. Good Center vocal imaging throughout. And later in the song the Right Rear guitar has some funky answering jab rhythm to the riffing guitar on the Left Rear.

04 - Climbin' Up The Ladder (Part 1 & 2)
-Now this track is where you can really here the Hendrix influence (around his Band Of Gypsies era.) Real nice choppy guitar licks in the Left Rear with Right Rear channel sort of slightly doubling out of time almost like a echo but it's multi-tracked different licks including an electric piano.
Ernie goes off with a great distorted (slightly phased) guitar solo up front.

05 - Voyage To Atlantis
-Starts with a beautiful guitar solo by Ernie in the Fronts and arpeggiated notes and chording in the rears.
Gorgeous main vocals with an answer from the back-up vocals.

06 - Livin' The Life
-Lots of hand claps with a Synth in Rear/Right. A funky dance type tune with an infectious rhythm.

07 - Go For Your Guns
-This is sort of a continuation of the previous track 'Livin' The Life', but more of an instrumental with Ernie going off on a massive guitar solo in the Fronts.


This is how all Quads should be mixed for this style of music IMO -a definite 10 all day long!

I can't add much to the analysis that precedes my post from @sjcorne, @steelydave. and especially @J. PUPSTER 's track-by-track prose attack, so let me simply concur that this is ALL killer and NO filler! A straight shooting 10 thriller funs that i am fortunate to be able to play again and again--go for those guns!
Last edited: Oct 16, 2020
You must log in or register to reply here.
Share:
Facebook Twitter Reddit Pinterest Tumblr WhatsApp Email Link