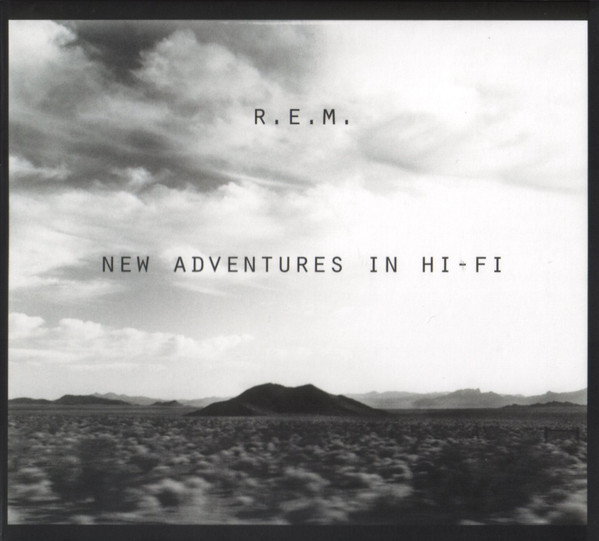 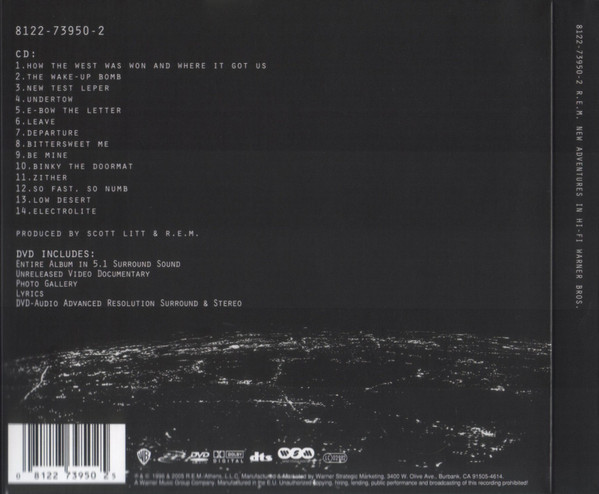 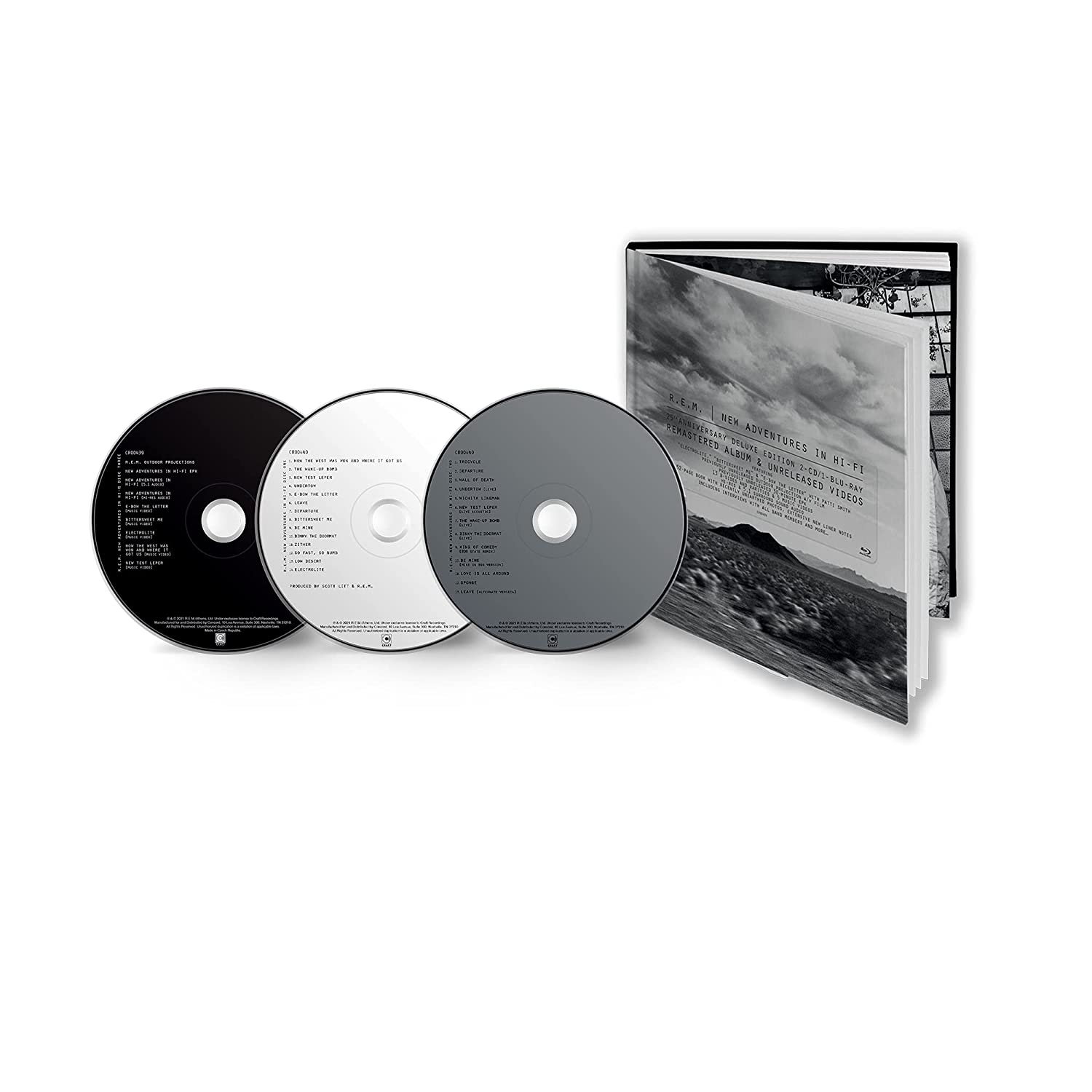 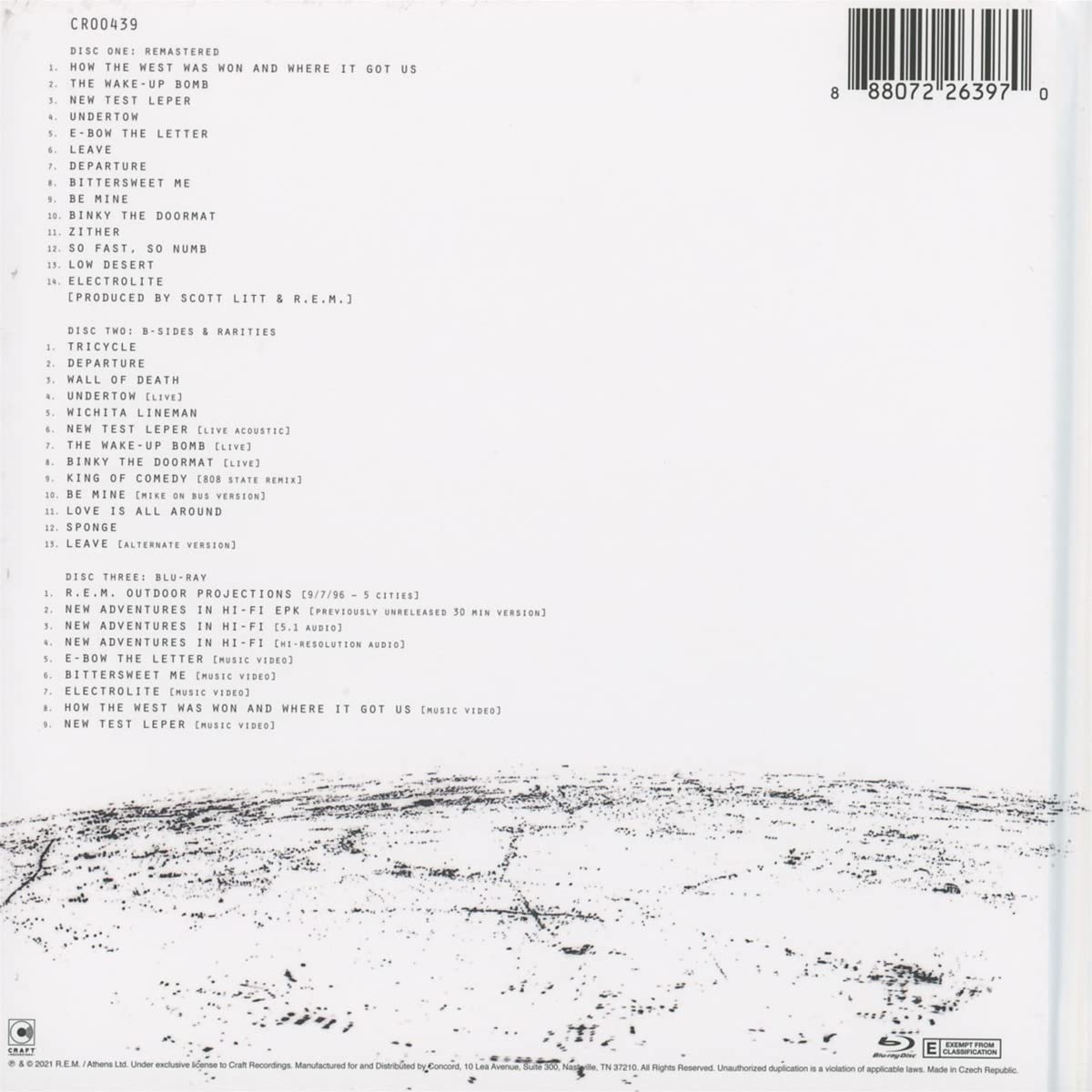 New Adventures in Hi Fi was R.E.M.'s rock album. They had tried numerous times with Out of Time, Automatic for the People and Monster to record a rock and roll record but they finally succeeded this time. Hi Fi is absolutely fantastic start to finish. The mix is amazing and the sonics are killer. Anyone who's even a casual R.E.M. fan should consider this required listening. A 10!

I like the record a lot, and it sounds MUCH better in 5.1 than it does in stereo. Great stuff!

i have to admit, i've never really liked this record, although it's got a handful of standout tracks that rank among my all-time r.e.m. favourites. but i agree with bangsezmax that it's a lot better in 5.1. playing the dvd-a was the first time i really enjoyed listening to it all the way through. it's such an improvement to the stereo version. the 'rock' songs (which i always found a bit dull) finally come to live. amazing.

Reveal was one of the first dvd-a's I ever got and it was also my introduction to R.E.M. Later on I got Document and Automatic - all good albums no doubt. There were always some good rocking tunes but the albums as a whole just didn't quite satisfy - things always seemed to get a little too serious. On Hi-Fi - and Analogdemon said it earlier - they succeeded in making a great rock and roll record (although I could have lived without Leave). They just seem to be enjoying themselves and seem to be at ease making these tunes. Finally I have an R.E.M album that I know I'll listen to over and over.
S

wavelength said:
I could have lived without Leave
Click to expand...

Haha. I find it quite funny you say that because Leave is in my opinion easily the best track on the album!

scorgiman said:
Haha. I find it quite funny you say that because Leave is in my opinion easily the best track on the album!
Click to expand...

Well, I'm glad it suits some. For me it's a headache.

Great release - my favorite REM album, and yes I love the song "Leave" too!
H

King Crimson albums sound great in 5.1 Things are crisp and clear without being too different.

But this... I'm not sure. The sounds I hear are crisp and clear and give new life to some of the instruments. At other times... where are the instruments? Some of the backing harmonies and effects are buried so far in the 5.1 mix it's really aggravating me. I mean, I've listened to these songs for a long time, so it's not a very good thing when I immediately notice some things are missing. Take E-Bow the Letter, for example. Why is Patti Smith's voice so quiet now? During the climactic finale, her mournful voice would rise and send shivers down my spine. In the new mix, however, it's buried under Stipe's WHISPERING! And where is the mellotron, particularly in the second verse? It's now barely existent!

See, I was really excited about hearing King Crimson and R.E.M. in surround because they are my favourite bands. The King Crimson albums have it right. They make the music come alive but still sound like the same album. Although I will argue Red is a little different (but that's another thread). But R.E.M. is my favourite band and after hearing great things about Elliot Scheiner, I was very excited for this. Around the Sun is good. There are some differences, but nothing too major to worry about. I very much like Around the Sun's 5.1 mix. But some songs on New Adventures in Hi-Fi drift too far away from it's original mix. I'm honestly hearing less sounds than the CD!

Here's another thing. It's strange, but I was listening to the newer DVD-A stereo mix and it sounded completely different from the 5.1 mix. In fact, it sounded almost exactly like the CD! But the weirder part is, the CD still sounds better! So... what happened here?

I have Up DVD-A, but haven't listened to it yet (it being my favourite R.E.M. album) because I'm a little worried to be honest. And I'm very worried about getting Green. I hear that's the worst example of Elliot Scheiner's tinkering.

I more or less stopped being a fan of R.E.M.'s new releases after Monster. I don't dislike that album as much as others seem to; I just kind of lost interest in them. I heard a couple of songs from Accelerate and bought that CD a couple of years ago. I guess I'm more of a fan of their "rock" albums. Anyway, I had never even heard New Adventures in Hi-Fi until I got the DVD-A a few days ago. I have to say that I really like it, content- and sound-wise. I gave it a 9.
D

paligap said:
I more or less stopped being a fan of R.E.M.'s new releases after Monster. I don't dislike that album as much as others seem to; I just kind of lost interest in them. I heard a couple of songs from Accelerate and bought that CD a couple of years ago. I guess I'm more of a fan of their "rock" albums. Anyway, I had never even heard New Adventures in Hi-Fi until I got the DVD-A a few days ago. I have to say that I really like it, content- and sound-wise. I gave it a 9.
Click to expand...

"Up" is a wonderful, gorgeous album. Absolutely up there with their best, and almost on a par with Automatic at times. "Behind the Sun" has its moments that match, but mostly dissappoints. I thought the last two albums were typical "veteran band tries to go back to the bread and butter, but realize you can only be young and hungry once" stuff, but were worthy efforts.

I'm fast running out of superlatives to use when describing these R.E.M. DVD-A's. Once again, Elliot Scheiner has done a remarkable job on the mix and the content in terms of song writing is amazing. Another big, fat 10 from me.

Underrated. The pretensious-ness of Michael Stipe is kept in check. That in itself is an achievement almost as impressive as the mix
Mix/Sonics.: 9.5
Music: 7
F

I'm more excited about this album than Monster. Another one I'm not very familiar with, but Monster was a bit of a challenge to listen for me. More daft authoring, with the DTS track clipping off the beginning of the first song (possibly due to late switching on my system?) even though it starts at around the two second mark on the clock. Also, on the DVD-V level (my current preference until I figure out getting decent DVD-A sound out of the player - SACD is fine, somewhat confusingly) the lyrics are, for some daft reason, on a seperate menu and not available when you're actually listening to the track. Like Automatic For The People, it is also not a problem in the DVD-A layer.

How The West Was Won and Where It Got Us Excellent. It just feels right.

Wake Up Bomb Very good. A tad biased to the front, and maybe Mike's vocals should be quite a bit higher, but it is cohesive and fills the space.

Undertow Good mix, even though there is some strong panning of percussion and guitar in the rears. At least all the percussion doesn't sit in just one rear channel. The track sounds quite bare at times; I wonder if the stereo mix might sound more full. Not keen on the track.

E-Bow The Letter Very good as it stands without comparison to the stereo. Possibly my favourite track on the album, I've not heard the stereo mix for sometime, and I remember not being very impressed with the 5.1 on In Time compared to the stereo. Sounds good here though, and there's plenty going on in the rears and it is definitely cohesive in its space. Patti Smith's vocal is nice and clear.
C

Excellent surround and a strong set of tracks. Like another poster, I drifted away from R.E.M. after Monster. Many of these "later" releases are all-new to me (Reveal, Up, Around the Sun, and Adventures), making it a pleasure to discover fresh R.E.M. music over the last few years. I give it an 8+ for songs and mix.

This was an easy '10' vote for me. Great Songs, wonderful 5.1 remix and the sound is to die for!
You must log in or register to reply here.