Realiser A16 the worlds most advanced 3d audio processor

The Realiser A16 is the wolds most advanced 3d processor. Featuring up to 16 virtualised Speakers delivering 11.1 experience combined with Headtracking technology creates an immersive experience like no other. Created by Smyth Research.

Video:
I had an opportunity to demo an A16 REALISER for several weeks in my home studio. 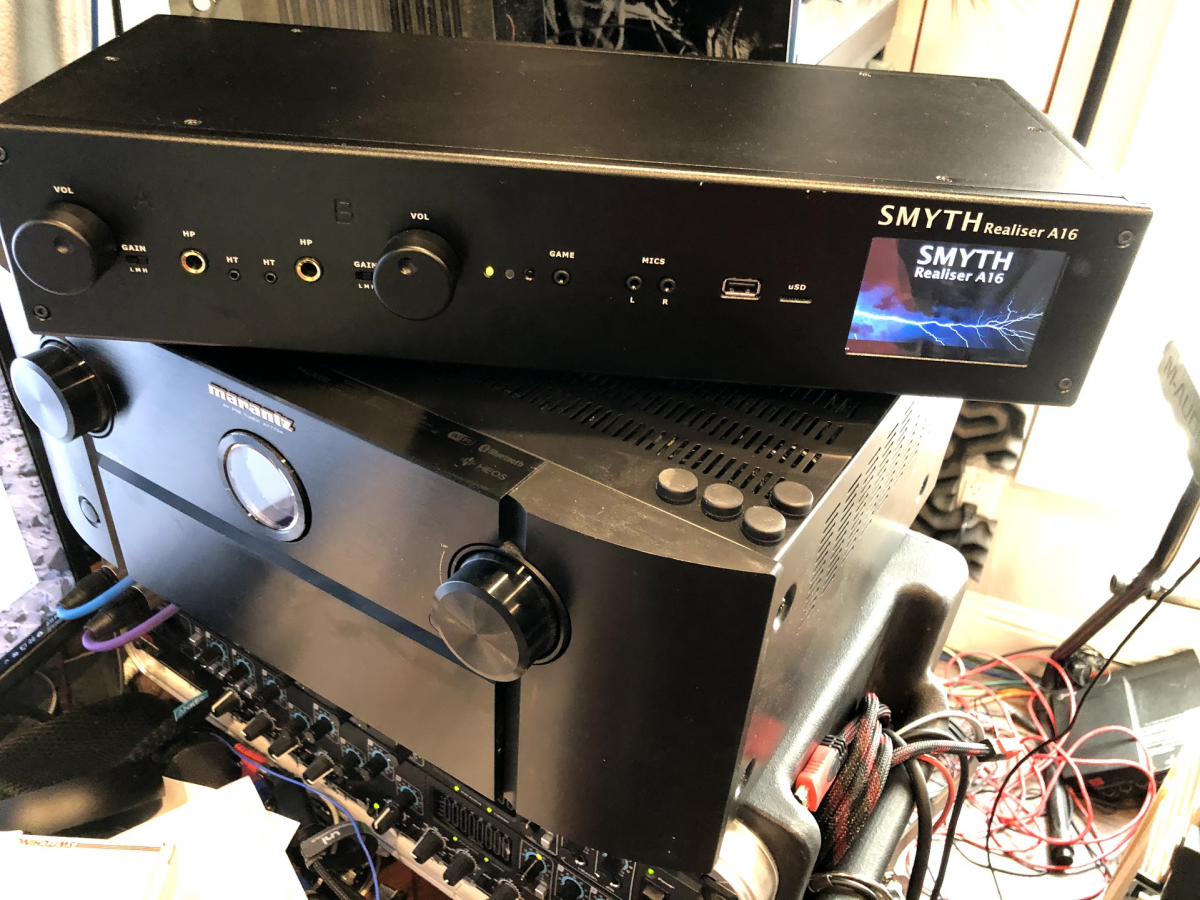 Although it can also drive powered speakers, I used it 100% with headphones, mainly because I need balanced outs, and that option is not in production yet.

Why would you spend $4K US on a headphone amp? Because you can't tell (other than the physical feel of headphones on your head) that you are wearing headphones. It is, just as the videos show, an amazing true to life simulation of sitting in a surround system room. Turn your head, everything sounds just at it would without headphones when you turn your head (and no delay or other indication that this is "virtual").

I sat in a virtual 9.1.6 and later 7.1.4 BBC Studio room and listened to all types of surround music, comparing to my 7.2.4 physical room (Genelec Satellites and Subs).

I didn't virtualize my physical studio or living room systems, because 1) the BBC rooms sound great, and 2) I didn't have enough adapters and cables at this time (and a possible out glitch, see below). However all that is needed to measure and virtualize your own room is included.

I used inexpensive Sony MDR-7506 headphones (purchased because they were supported by other virtual surround software I've tried) and corrected them for my ears using the A16 and included in ear calibrated microphones. I have Bose and Sennheiser headphones, but after calibrating and listening to the Sonys I didn't feel the need to test the others. This despite Smyth Research recommending very high end phones (which I didn't have to test).

I should point out that I've test many surround via headphone systems and software, and nothing else comes anywhere close (short of full VR anyway, see below).

I did add a tactile system:


Robot Check
to shake my chair in lieu of the sub woofers in the studio. The A16 has special outputs for that type of system.

So I have a lot of information to share but here's the bottom line; I'm going to buy one of these, just as soon as the 2u Black Rackmount Balanced Out version is available in a couple weeks.

Again, why would I spend that on headphones when I have an acoustically treated studio with 13 Genelec Satellites and 2 Subs? Because it turns out I really need to use headphones so I can work/listen at any time and not worry about disturbing my Wife, or conflicting with TV/Movies in the Living room. Yes, my Studio is Acoustically treated to sound good inside, but it is not soundproof, especially at low frequencies, and even moderate listening levels "shake the walls", according to her ;0) 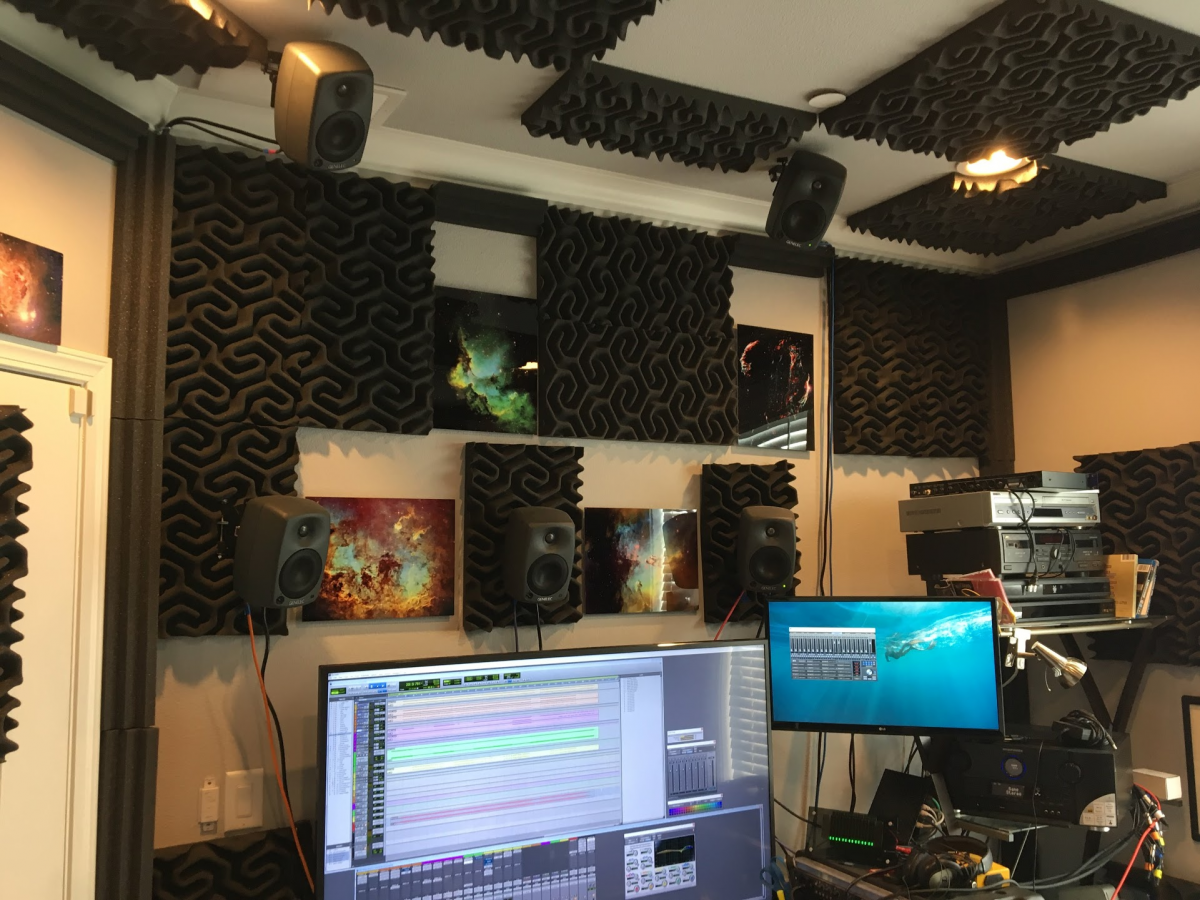 Having said that, at this point in time you need to be aware that there is a long list of things on the data sheet that aren't ready/implemented yet, and I used it almost exclusively as a computer sound output device (mac and windows), vs. hdmi decoding of Blu-Ray etc, or line in.


Absolutely convincing virtual reproduction of up to 16 channels of computer usb surround sound via headphones with optical head tracking (Azmith tracking only at this time)​
Tactile output for ButtKicker type systems​
Dolby Atmos and other Dolby Decoding​
Virtualizing/Calibrating your own room (not tested by me)​
Not yet implemented:


DTS-X and other DTS Decoding​
Auro 3D and 2D decoding​
Altitude head tracking (I definitely need this for my immersive audio work {mixing and upmixing} but didn't notice most of the time and, of course, not at all when listing to 5.1 or 7.1).​
Virtualizing/Calibrating your own room, without the A16 being connected to your speakers (using pre-recorded tones in files).​
Not on the Roadmap that I would like to see:


6DOF; Six Degrees of freedom in the virtual headphone simulation. Azmith and Altitude tracking will give 4 degrees of freedom. Meaning you can sit in the listening position and move your head any way you want and be thoroughly convinced you are listening to speakers. 6DOF would mean you could leave the listening position and virtual speakers you got closer to would get louder and the ones you moved away from quieter.​
​
I can currently experience 6DOF in my Oculus Rift VR (lessor audio quality and can't really make an A/B comparison at this point), but I want/need this in "AR" with the A16 (or I guess pull the computer display inside VR with the Oculus Rift, which is somewhat doable, hmm...)​
Broken in the unit I tested:


Apparently a problem with all/many early units, an occasional crash error that unfortunately puts out horrible noise at what seems like max volume.​
Really a deal breaker (and one reason why I didn't use it with speakers {The other being a lack of enough proper adapters/cabling to connect 1/8 stereo unbalanced outs to 14 XLR balanced in powered speakers}).​
​
However, This is supposed to fixed in all newer units.​
Menus are deep and confusing. I guess you would get used to it over time, and/or wouldn't need to change things a lot after a detailed initial setup.

Everything has to be done with a remote, Which seemed a little flaky in my case, but maybe because the IR sensor was close to an pointed a little at my 50" monitor.

Optical Head Tracking means you have a head tracking unit attached to the top of your headphones, and an extra wire to to deal with (My wife laughed at me, but I guess it's not as silly looking as VR). Also a Receiver unit on top of your monitor/TV.

So there you have it. I'm happy to answer any questions but again this lets you listen to surround, at volume, without disturbing others in your house/neighbors and it really really does sound like you aren't wearing headphones. The sound is "outside your head" (unless you close your eyes and hold your head still) the illusion is totally convincing.

Awesome post Glenn. I can’t like it enough! I have had my A16 for a month now and I love it. I haven’t been as fortunate as you at getting the BBC room to work optimally for me but the surround PRIR that I’ve created at home is a complete out of your head triumph. I use mine solely for listening enjoyment, not mixing, and I’m seriously jealous of your home studio. In truth, it looks even more impressive than the pictures I’ve seen of Steven Wilson’s Genelec surround mixing studio. I use J River Media Center which decodes DTS-X and also converts DSD to FLAC(with a significant buffering lag on my laptop even though the laptop has 32 Gb of RAM). I use the same PCM room PRIR for stereo, 3 channel, quad and 5.1(and J River allows me to split the center channel out to L and R, which I prefer). I also play a small library of physical discs placed in my OPPO 103D and then connected to my SR for Dolby Atmos listening. By the way, I experience no noise issues with my 5 week old A16. My only regret is that I didn’t go in for two units when you could have signed on for 5 units for the same current retail price that now gets you one.
Last edited: Mar 9, 2020

I forgot to mention one issue on Windows. The Windows Audio USB driver is not signed. Windows 10 will not load it unless you take steps to allow unsigned drivers. I take it there are various ways to do that, but the one I used was not sticky across reboots (and not a good idea to have it off anyway, security wise).

I will check with Smyth Research on their plans for signing the driver.

No issues on Mac (other others reported issues with Pro Tools, I didn't find any, but didn't do days and days of testing on Mac).

Oh, built in upmix is another feature that is not implemented yet. Maybe Dolby upmix, is, I didn't test it, but certainly not others and the mentioned in the manual Smyth Research upmix method is not.
You must log in or register to reply here.
Share:
Facebook Twitter Reddit Pinterest Tumblr WhatsApp Email Link