PLease post your thoughts and comments on this unusual release, which includes 3 CDs and a 4th disc which is a surround HiRez DVD-A of the entire score!
This soundtrack has also been reissued on Blu-Ray audio as of 2018.

Scans included (big - please wait) since this one does not show up too often. 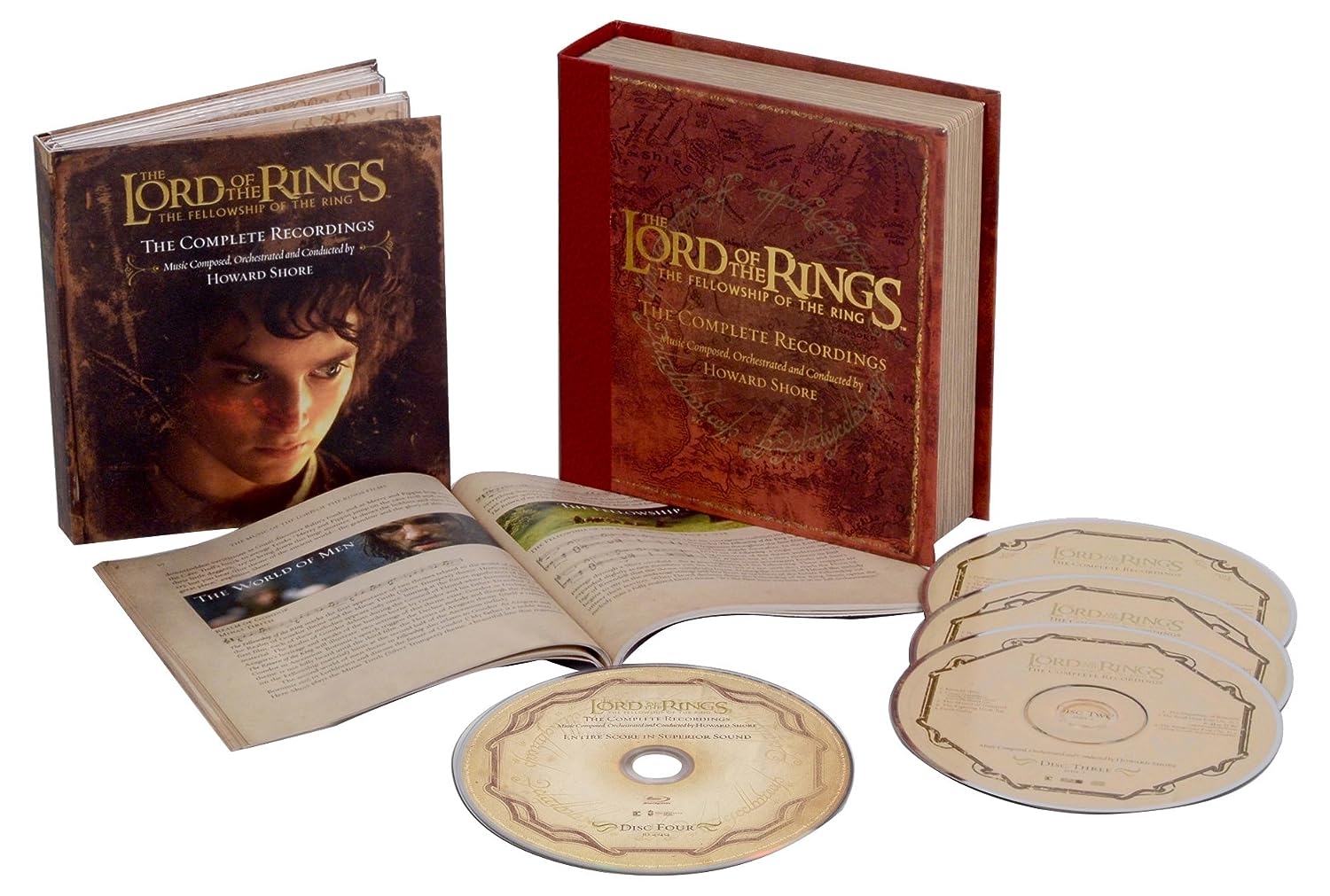 I've only listened to the DVD-Audio of this set (but I guess that's what we should concentrate on here anyway).

As it was mentioned before in another thread, the mix is not very adventurous, in that you don't get instruments thrown at you from all sides (especially from behind). It's more like the orchatra stage is opened up more to the sides and slightly towards the rears.

I don't know whether this is a good thing or not for such orchestral music. I guess having instuments pop up from behind with this type of music could also destroy the overall coherence of the orchestra.

The other concern is that the MLP audio track is only available in 48/24 instead of 96/24. So I don't know if this actually qualifies as HiRez.

Personally, I think that the added resolution of 24 bit vs. 16 bit on the CD is more important than the higher sampling rate, and frankly, I doubt that I would really hear the difference.

On the plus side: that way the complete recordings fit on a single DVD-Audio, and most importantly: the music is splendid! It is so much fun to hear all the stuff that either didn't go into the movie or is only used in the background. Even thing like Gandalfs "humming song" are there. So this is really a treasure for fans of the movies.

Another gripe I have is that you have to buy an expensive set with three CDs and one DVD-Audio (with exactly the same content music-wise), even if you're only interested in the DVD-Audio. While the avid LOTR fan will probably want to have this as a collectable, I'm sure there are many people who really only want the DVD-Audio and they have to pay for the CDs as well...

I really enjoy listening to this, and I didn't regret the purchase; I would by it again! Overall, I give it a 7.

Now, if they would only release similar sets for the other two films...

Thanks Oliver. I changed the title (Didn't think it would all fit!).

And thanks for the great write up!

Glorious package; highly recommended. Recently added to my list of fave discs with link to the recent review I did for the April-May issue of HDTV Etc.

The other concern is that the MLP audio track is only available in 48/24 instead of 96/24. So I don't know if this actually qualifies as HiRez.
Click to expand...

My understanding is that the recording session resolution was 48/24, so it's a bit-for-bit copy of the master.

Thanks Felix for the link to your review. Your comments are always very appreciated!

Wonderful package, spectacular music and a yawn of a surround mix. Pretty much a "wide stereo" effect. I originally thought it was synthesized surround... I've been told that it is the real deal. Hard to tell, and it shouldn't be hard to tell, if you know what I mean. A missed opportunity, in my opinion. Six points.

Yes, folks looking for an expressionistic mix will be disappointed; those expecting a "Conductor's POV" will be pleased.

Felix E. Martinez said:
Yes, folks looking for an expressionistic mix will be disappointed; those expecting a "Conductor's POV" will be pleased.
Click to expand...

Said another way (and more to my own meaning) folks looking for an immersive surround mix will be disappointed; those expecting an enhanced stereophonic mix will be pleased.
S

This one is tough for me to give a QQ score to. I am a huge fan of the movies and of Howard Shore's scores to them. I think this is a great sounding DVD-Audio that allows a deeper contemplation of the various themes employed by Shore as well as the extra bits including the Gandalf/Aragorn vocals referred to above. However, I'm going to downgrade to an 8 here due to the lack of use of the surrounds other than to provide ambience. While I don't think this music needs an aggressive surround mix, this mix did leave me a bit flat.

The latest scuttlebutt I've read has the Two Towers Complete Recordings coming out in late November or early December 2006. Doug Adams over on the moviemusic.com board expects the official release date to be made public soon I'll be snapping that one up on day one.

This thread also has a lot of information regarding this release:

I was nowhere near finding this forum yet when this thread was made, but I was a HUGE fan of the Lord of the Rings films, and Howard Shore's wonderful music. Indeed, they are my favorite film scores NOT composed by John Williams! I would be one of the LOTR fanatics who bought this release for the three CDs of the complete (extended edition) score for the Fellowship of the Ring, thinking little at the time of the DVD-Audio disc. Indeed, I was in college (and in Germany) at the time and had no way to play DVD-Audio discs for years to come after this. Now that I have not just a player that will play DVD-A discs, but have also ripped the surround music to FLAC files (having done my own edits and tweals and track renames to my liking).

Now that I have done all that and sit listening to these scores in my living room, I felt like I should rate these and review them. I gave this one a 9. The music for me is a solid 10. Love having the complete scores. I could do with the "source music" being separated out into tracks at the end of the CDs, but that's me. There are also a few examples of cues that were stuck together in a single track that are not connected in the film, which I also prefer they not do. That takes a bit off the rating for me.

On the sound quality, I do get that for some the 24/48 setup is a bit underwhelming. But from a film score perspective, this is literally one of two scores that I like that even HAVE any sort of higher resolution, so I am ecstatic. I think the sound quality is quite good, wonderful low end that doesn't come through on the CD mastering. I give the sound quality a 9. That said, this 5.1 mix is literally just pulled from the film's sound tracks themselves, so it's reflective of that. Voices in songs with words are solidly in the center channel and the surrounds are mostly just reverb, sense of space, etc. That said, I also think that hard panned sounds and discrete surround content doesn't necessarily work for orchestral recordings. For me, the surround mix is an 8.

The packaging and content (other than the music) is an enthusiastic 10. The huge book is overflowing with detailed analysis and discussion from Doug Adams of the immensely intricate score composition from Howard Shore. (Later after the three LOTR Complete Recordings releases, Doug even released a huge book on the topic).
You must log in or register to reply here.
Share:
Facebook Twitter Reddit Pinterest Tumblr WhatsApp Email Link