There is no added reverb or delay. Nothing is ever added added.

There is, with the current default settings, and attempt to put any existing "ambiance" in the rear channels, but you can turn that off. Look for "Ambiance Extraction" in the ini file or in the guide.

OK post at top of thread updated with SpecWeb 2.0 Beta 1.

Built in upsampling - 2x by default -u1 would be no upsample -u2 (the default) would be 2x upsample -u4 would be 4x upsample. Downsample to the original input rate is automatic. All other settings relevant to upsample are auto (by default) e.g. fft size etc.

Limiter VST changed to Sonic Anomaly Unlimited. No distortion with this VST so clipping detection is deprecated (but -k flag left in to avoid breaking AudioMuxer integration). Loudness of final surround (ebur128 LUFS and True Peak) are now within 0.5dB of original stereo.

Zone method of ArcTan added, -m3, Special keyboard code "t" for "test" to toggle back and forth between ArcTan Across and ArcTan Zone during play

Build tools and all libraries updated – which meant support for older OS’s had to be dropped.
Increased Play/live performance and meter responsiveness.

From the Beta 1 ReadMePlease txt file:

One thing that makes this release a Beta is the default width settings.

I've always maintained that the best results can be had by individually adjusting settings on a per song basis
but I acknowledge that many users don't have the time or patience to do so, so I've tried to create default
settings that give reasonable results across many types of songs/producers.

In SpecWeb2.0 Beta 1 the default arctan width settings are based on a mathematical analysis of my 38 torture/regression
test tracks, which cover many types of music and production techniques.

However some Alpha testers preferred the original ("DKA" starting point inspired) width settings but I think more ears/testing is needed so I would hope
you would try and give feedback as well.

Also there is a new Zone method of ArcTan, -m3 on the command line or mode=zone in the ini file. Plus a special keyboard code "t"
for "test" to toggle back and forth between ArcTan Across and ArcTan Zone during play.

Some Alpha testers preferred "Zone", but there is more work on that method still going on so it is not yet the default, but I
would also appreciate more ears/testing and feedback on that setting.

So this is the first time I've released a public Beta. I did this (today) based on Jon's post http://www.quadraphonicquad.com/forums/index.php?threads/sm2-vs-specweb-vs-penteo-16-pro.27384/ on comparing different upmix methods (so thanks for the kick in the butt to get this beta out ;0) but also because there are now way more users here than in my alpha/beta test group and I do think we need more ears/testing.

So, if you want to help, grab the Beta and dive in, and post feedback here.

PS Still also there is a need for people with immersive sound systems. Dolby Atmos/Dts:X/Auro 3D setups with at least 2 (and preferably 4) ceiling or upwardly facing speakers, for testing immersive upmix methods.

Ideally you would also have an hdmi connection from a windows computer to an HT with DolbyAtmos, as this would mean samples wouldn't have to be Dolby Atmos/Dts:X/Auro 3D encoded before listening as Windows 10 has built in DolbyAtmos encoding on the fly.

However I shouldn't jack my own Stereo to 5.1 thread with that so I will update a more appropriate thread for that.

Thanks Glenn. I will check this out for sure.

I get this error from the install batch file. Not sure what to make of it but is stops the process.
Should I uninstall 1.5 first? 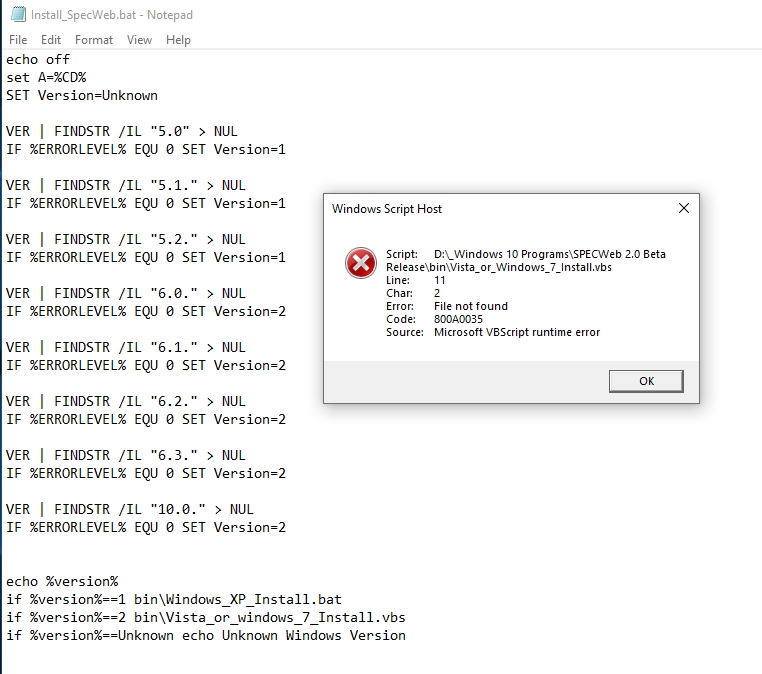 I got this message while trying to install...

See, that's what happens when you rush (me not you).

zeerround said:
See, that's what happens when you rush (me not you).

OK, thanks for your patience. Please delete everything and re-download.

I have to temporarily turn off "Auto-Protect" to use SPECWeb. The reason is that the spec web files are unknown to Norton, so it sees them as a threat.
Obviously, not too many people in the WORLD have these files on their PC, so they are not in the known good file list at Symantec.

No big deal, I just right click the Norton logo and say TURN OFF AUTO PROTECT for 15 minutes. If I don't, it deletes or quarantines the files

ESET never gave me any problems with the Beta Alpha install that I recall, but I'll try this package.
I disremember (if I ever knew) that Windows 10 natively decodes Atmos. So just how does this work, and what player?

Well this should really go in the immersive upmix thread but since you asked:

Windows 10 doesn't decode atmos, but it has the ability to encode atmos on the fly. This is mainly for games. It's a way to get more than 8 channels (or many sound "objects") over hdmi (hdmi spec can handle more than 8, but AFAIK no HT or PC audio driver does more than 8).

Games can say, this particular sound is coming above and behind your right ear, and dolby Atmos will take care of rendering that in headphones, or speakers, so the sound does come from there. Of course MS has their own technology, Windows Sonic, to do something similar (at least with headphones) but they have partnered with Dolby so that Atmos can be used as well (but the interface for programmers is Windows Sonic either way and the end user gets to choose which they use to listen with).

I saw DTS:X is also supported in some flavor of windows 10, but I think you have to pay extra for that. Originally you had to pay $14 for a Dolby Access app for Atmos, but I'm not clear if that is still the case or not, as Windows 10 matures.

Up until recently the only file player that could play 12 channels via this Dolby Atmos on the fly over HDMI method was a MS "Universal App" example that had two or three files hardcoded in. I didn't have the chops to teach it to load files, MS "Universal Apps" being completely alien to what little MS stuff I do know.

But over months I've kept googling and watching for anybody doing anything with the API call to windows sonic and finally found a guy in Japan working on a Audiophile Player and managed to get him interested in doing a 12 channel player using all this. The first result of this is here:

but it's not very polished at this stage, but as I say will play a loaded 12 channel file, so could be used to listen to immersive audio coming out of the work I'm doing or from Penteo 16 (set for Dolby Atmos output).

Note there are some nuances to 12 channel audio files. First (assuming you had a 12 channel audio card connected to your speakers) foobar2000 and other apps won't play them unless they have channel mapping in the wav header, which can be done with ffmpeg like this:

and like all things surround there are multiple standards for what order those channels should be in.

Anyway the other challenge is the file size. These things are huge, at any sample rate. (6 times larger than a stereo wav, 2x larger than 5.1, and no flac support beyond 8 channels so you have to deal with the 4GB wav file limit and probably switch to one of the updated formats, based on wav, but supporting files larger than 4GB.

Hmm, haven't checked with the player and larger than 4GB files...

You can PM me for sample stereo to 7.1.4 upmixed files if you have an Atmos System.

However to date it's been very hard to find anyone with atmos, etc. speaker systems to help in testing.

An interesting (to me anyway) other platform is VR. Yes we are back to headphones but since you have head tracking (and visual queues) you really can get very convincing immersive sound, and for more fun you can interact with the sound objects. Move closer to the drums, etc. You could even remix by moving objects around.

FYI Ambisonics is big with the VR Developers, so any immersive upmixer should optionally output in 1st, 2nd or even 3rd order ambisonics, as well as in 12 channels.

I've got an Oculus Rift and have been goofing on that.

Thanks guy. Lot to chew on. My "Atmos" system to date is only an added front high pair, but for Atmos encoded music that uses that fully it makes a difference. My receiver decodes Atmos and DTS:X (such as there is) and I have several music BD's Atmos encoded.

Penteo I don't and probably won't have.

Hey Glenn. Some nice updates in 2.0 by the look. I‘ll give it a whirl before Christmas.

I have a 7.1.4 system with Atmos/DTS:X AVR, also a ‘spare’ Win10 PC with HDMI so could do a bit of 12 channel testing. Is there anything special needed for playback?

@HomerJAU, PM'd files and instructions (and others who PM'd me).

Need to get my head around Specweb first I think. Although I have the Atmos system you need Glenn.
Keep promising myself to get started on it.

I'm hitting on the latest version of SpecWeb (2.0 Beta) like there's no tomorrow!!
Just upmixed all my Roxy Music CD's and I am opened mouthed with how much separation and clarity there is on all of them.
Bit late to the SpecWeb party but sure am pleased I've, at long last, started to use this great upmix programme.
I'm using the input -m4 as the option for starting the process...so much clearer!!

One total convert here...not that you could tell.

I've just installed the beta in the latest version (32-bit) of Windows 10. After rebooting, dragging a FLAC file to the SpecWeb 2.0 icon does nothing; SpecWeb.exe just dies before showing any output. SpecWeb 1.5, however, works perfectly fine on the same computer. Anything I can try?