Please post your thoughts and comments on this April 2015 DVDA-V release.
The same 2015 5.1 surround mix is also available on Blu-Ray in the 2017 "Fanfare" box set. 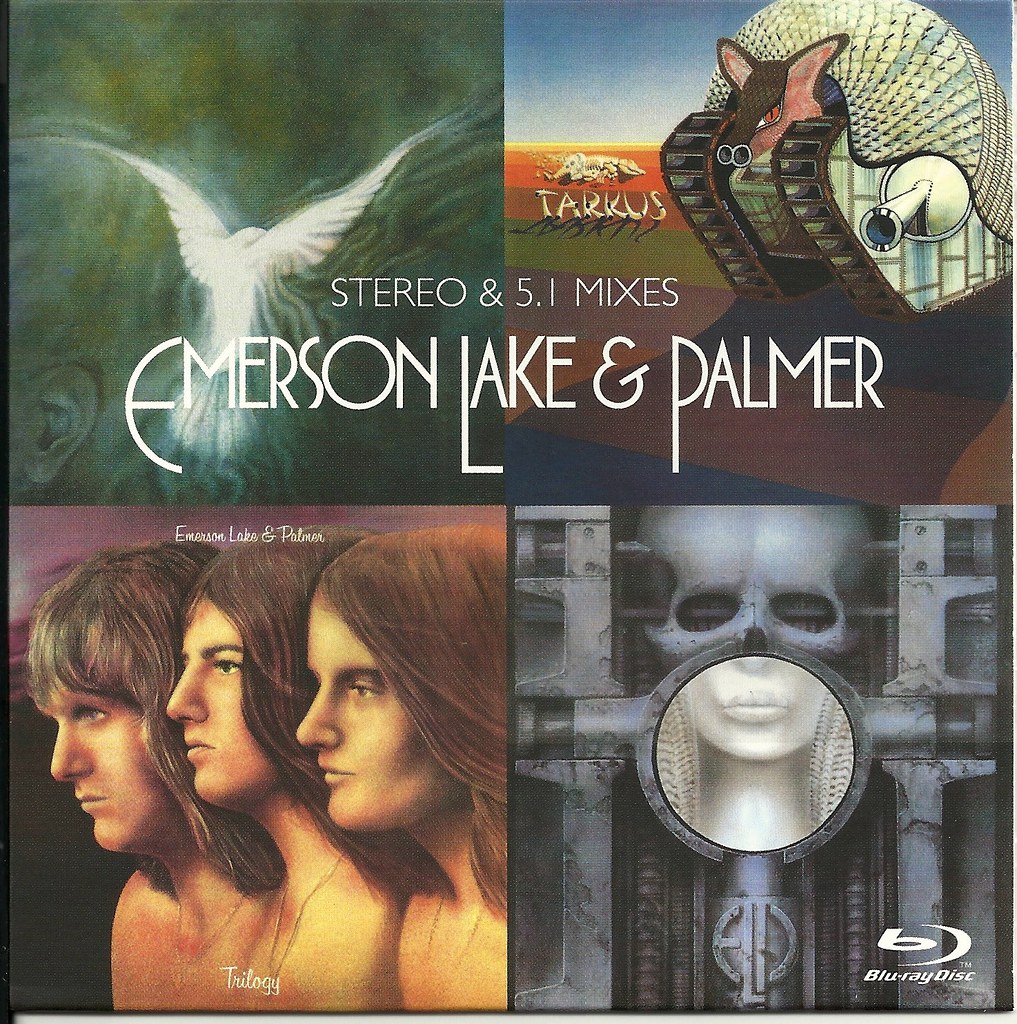 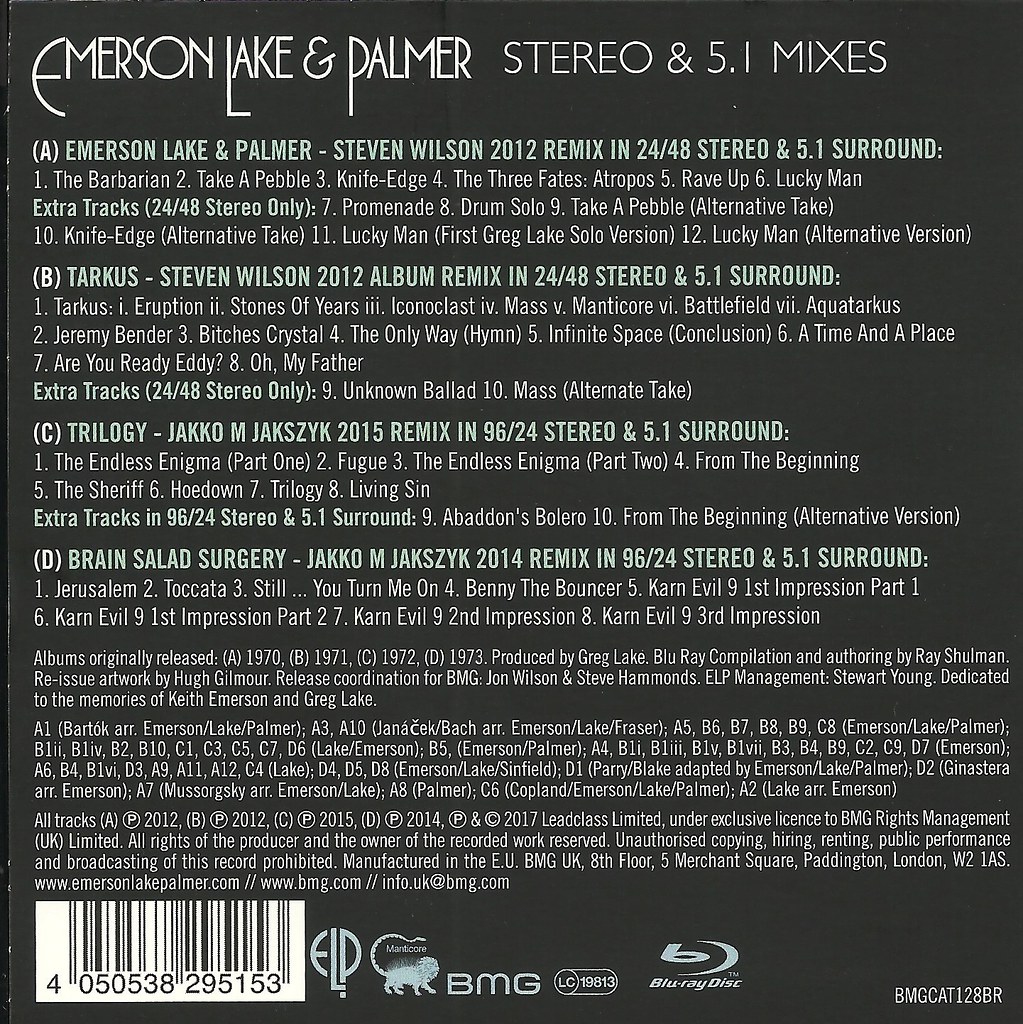 For starters let me say.....four days from being dispatched in the UK to being delivered in Connecticut? Amazon UK has never delivered so quickly! I had to double check my order to make sure that I hadn't accidentally paid some insanely expensive expedited shipping. (Thankfully, I hadn't.) I wish all Amazon UK orders could arrive this fast! (And they said I shouldn't expect it until May 19!)

Now onto the important part.....the mix. Jakko Jakszyk has certainly redeemed himself with this one. A far superior mix compared to Brain Salad Surgery. Lots of nice stuff going on in the rears. There are a few places where things get a bit muddy, but it doesn't happen much. The album's title cut (which is probably my favorite ELP song) starts of very nice with Lake's vocals up front and Emerson's piano in the rears. "Abaddon's Bolero" had always been my least favorite song on the album, but the 5.1 mix gives it new life. Probably the most immersive mix of all the songs on the album. Hearing the gunshot in "The Sheriff" come from over my right shoulder put a smile on my face. I did notice one technical flaw; the final chord of "Hoedown" doesn't get a chance to fully dissolve and is cut off somewhat abruptly. I do think everyone will be pretty happy with this. I am throwing it a 9. The first seven songs have always been among my favorite ELP tunes, but the last two I never felt were up to the standard of the others. It also loses that one point because of the one technical glitch and the few moments of muddiness. But overall, I can't complain. This will be getting repeated spins, it's a wonderful disc. And it's the first reason I've had in ages to take Hand.Cannot.Erase out of the Blu-Ray player!

Now to just get Streetlife Serenade and I will have my two most anticipated 2015 releases! It's looking like a good year to be a surround nut!

Mine arrived in NorCal today from Burning Shed.....I cannot believe Trilogy was released before Amused To Death. The first listen was spectacular even though I could not listen at the volume I would have liked. I will listen again this weekend and vote then.

privateuniverse said:
For starters let me say.....four days from being dispatched in the UK to being delivered in Connecticut? Amazon UK has never delivered so quickly!
Click to expand...

Mine arrived today Amazon UK to Australia in 4 days! What a lovely surprise. From the Beginning is now in my 'Seventies Acoustic Greats' surround play list. Seems like I've been waiting to do this for ever...

Well worth the wait! This disc sounds great (only sampled a few tracks, will vote later - it will be near the top of the scorecard for sure)

One thing I noticed about this disc is the need to play it loud, especially Hoedown and Trilogy, in order to appreciate the great job Jakko did with the mix. I'm very pleased with it. Also, the liner notes may provide an indication as to why it took so long to release this title. Jakko said that there were 37 reels to sort through without much accompanying, if any, documentation. I'm pleased that the necessary time was taken in order to achieve excellent results rather than rushing product to market.
C

Snood said:
Heya GOS Snood got his today - ordered from Amazon UK too and live is US too

Got Me Minstrel also today Amazon US :51banana:
Click to expand...

I got Trilogy today also...it's not going to matter for Gos 2.0...he's in South America now on business...dangerous situation with Cinco De Mayo coming tomorrow...they might run out of beer in that town...

Funny, even in South America...I can sniff these posts out. LMAO! Maybe mine arrives as well....who know...just the post man....and Mrs Gos...

Clint Eastwood said:
I got Trilogy today also...it's not going to matter for Gos 2.0...he's in South America now on business...dangerous situation with Cinco De Mayo coming tomorrow...they might run out of beer in that town...
Click to expand...

Alright! I finally have time to write a review after several listens so here it is:

First off, I always knew that the opening of "The Endless Enigma" would be perfect surround material, and boy it sure is, especially in the back to front interplay between the piano and the congas! Like on other SW and Jakko mixes, Greg Lake's lead vocal is most prominent in the center with reflections spilling over to other channels, while Emerson's piano is the main focal point of the surround channels for this opening suite.
"From the Beginning" has always been my favorite of Greg Lake's songs for the band, and it's just as charming in surround as it ever was! Jakko made an interesting mixing decision by placing Lake's electric guitar solo in the surround channels, while Emerson's keyboard solo is in the front. I might have done it the other way around, but then again they didn't ask me to mix this…
Next we have "The Sheriff" featuring Carl Palmer's potty mouth! The drums (and especially the toms) are very forward on this track, with the toms rolling around in-between the front and surround channels. Emerson's honky-tonk piano is also a feature in surround, and look out for that gunshot!
Emerson is the main surround focus once again on "Hoedown" with his synthesizers circling around the room in a very appropriate manner. Throughout many times on this remix, Greg Lake's bass playing is brought further into focus than it was on the original album, and I especially love to hear what he's doing in the middle of "Hoedown".
Beginning side 2 is the epic title track "Trilogy", and once again, Emerson's piano is the focus of the surround channels, while Lake's voice is anchored in the center. My favorite moment on this track is the explosion into the full band with bass, drums, and Emerson's synthesizer stacks in full force! It sounds like there are few notes missing from the synth chord stacks when the full band enters, but I'd have to go back and check the original stereo mix with the new one to see if there is an audible difference. Emerson's synth leads also dance around all of the channels to great effect!
I'll leave "Living SUN" out of this review until more people have a chance to hear this remix. Don't want to spoil the myriad of surprises contained within this track.

And that leaves us with "Abaddon's Bolero". Like the opening of the album, this was an ELP track that was designed for surround. Layers upon layers of keyboards which can now be carefully extracted and given their own individual space as a part of the whole.

For those of you who are unsure about this release due to "Brain Salad Surgery", GET IT! There's no glaring errors on this one, and I think that Jakko has done a fine job keeping the original intent of the album while making it sound great for today's surround standards! I'm giving it a '10', no reservations whatsoever!

Arrived today. First impression is VERY favorable. Nice spread of parts where it was possible and , most importantly, where needed to uncrowd the mix and reveal the separate parts. Just enough movement to remind you that it is a surround mix and not overdone. 10 out of 10.
S

While I can see why some folks may want to goose Lake's vocals a bit from time to time, I think this is a great sounding mix with occasionally really interesting and effective uses of the surrounds as noted above. Despite some of this album not aging well (in my opinion), I think re-release is a really fine effort and well-worth the purchase. I need to give it a few more listens before I give it a score, but it'll be a 8-9 most likely.
Last edited: May 5, 2015

OK, Mrs GOS just informed me that I have a package at the post office today...hehehe. Must be Trilogy.


Clint Eastwood said:
I got Trilogy today also...it's not going to matter for Gos 2.0...he's in South America now on business...dangerous situation with Cinco De Mayo coming tomorrow...they might run out of beer in that town...
Click to expand...

GOS said:
Funny, even in South America...I can sniff these posts out. LMAO! Maybe mine arrives as well....who know...just the post man....and Mrs Gos...
Click to expand...

GOS said:
OK, Mrs GOS just informed me that I have a package at the post office today...hehehe. Must be Trilogy.
Click to expand...

But I did just complete my second casual listen of Trilogy...I think it was an excellent job..I especially liked the method employed on From The Beginning...this may bother some people with the guitar placement but I think it gives more separation in the soundfield and lets you focus on the vocals more...that song is the crown jewel of the album for me....this is a strong 8 or maybe a 9 for me...impressive results with what they had to work with..

hahaha - yes, those bastages. I could be anything...

OK Mods - sorry.....I forgot...or at least overlooked that I'm on a POLL thread. Please....delete my rambling posts. It was unintentional.

Agree with everyone else's overall impressions, the first ELP album that bought upon its release and still my favorite after all these years. I think Jakko did a very commendable job on the mix, I'll be playing this disc over and over.

I said what I meant and I meant what I said ...Trilogy in surround is AWESOME 100%

GET IT!!!
and Carl's potty mouth is VERY low in the mix..

Wow man....you're killing me. Here I am stuck in South America.....and can't even listen to what is surely sitting at my house by now....

kap'n krunch said:
I said what I meant and I meant what I said ...Trilogy in surround is AWESOME 100%

GET IT!!!
and Carl's potty mouth is VERY low in the mix..

my fave album from my favourite band done wonderfully right in surround..

Oh dear. Living Sun? Really? 4 times in the booklet, 4 times on the box. Also: Copeland instead of Copland, 4 times in the booklet. Plus typos like "ove-dubbing" (in the Carl Palmer quote). It's not as if there wasn't enough time to edit the text. OK, end of rant. Music-wise, it's my favorite ELP album, and I think Jakko did a great job on the surround, maybe with the exception, as some have noted, of the vocals on some tracks. All in all, I give it a 9.
You must log in or register to reply here.
Share:
Facebook Twitter Reddit Pinterest Tumblr WhatsApp Email Link