Please post your thoughts and comments on this 2020 Blu-Ray release from Nick Mason's Saucerful of Secrets entitled "Live at the Roundhouse".
The new band covers Pink Floyd material that was originally written and recorded from 1965 to 1972. 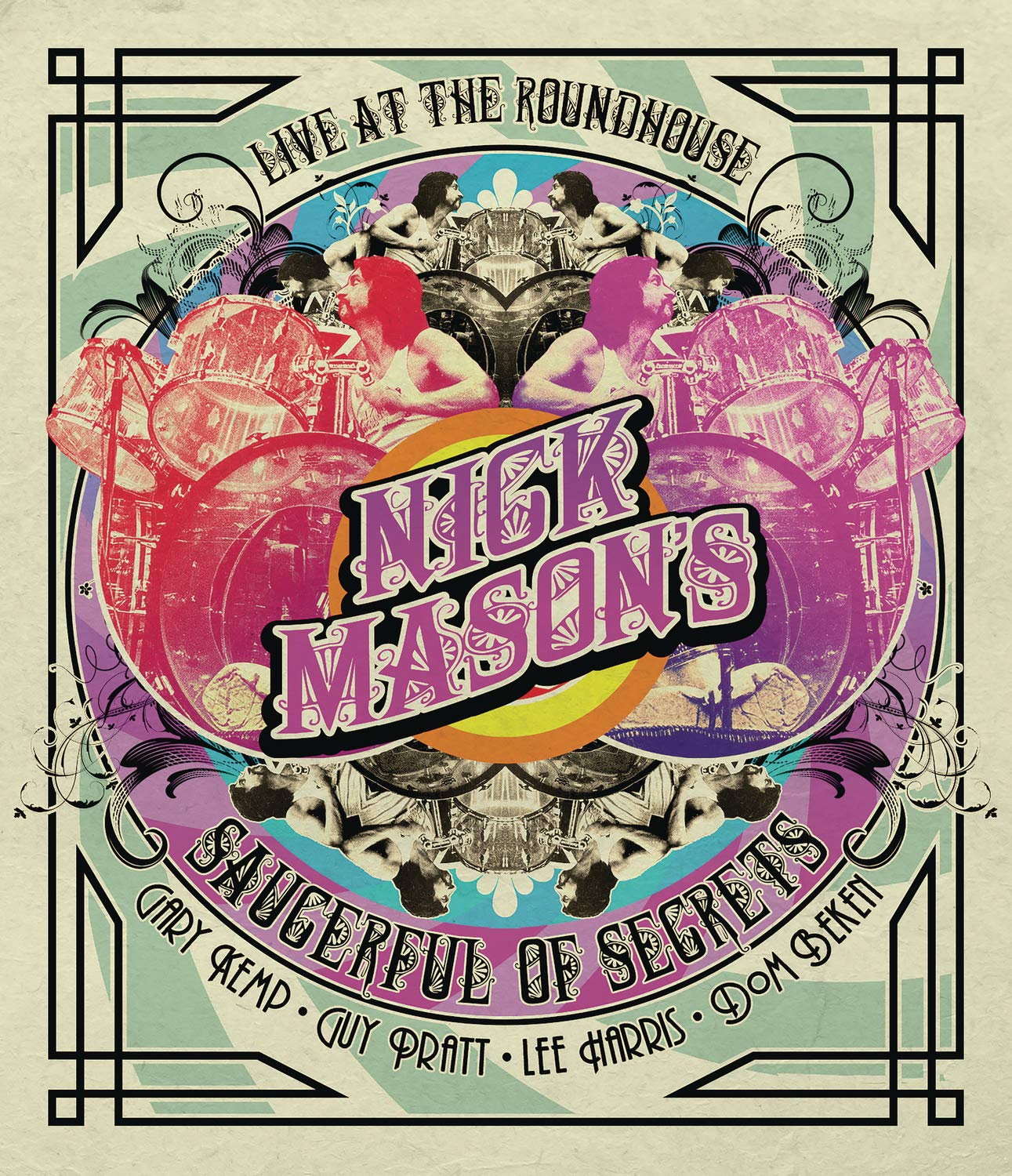 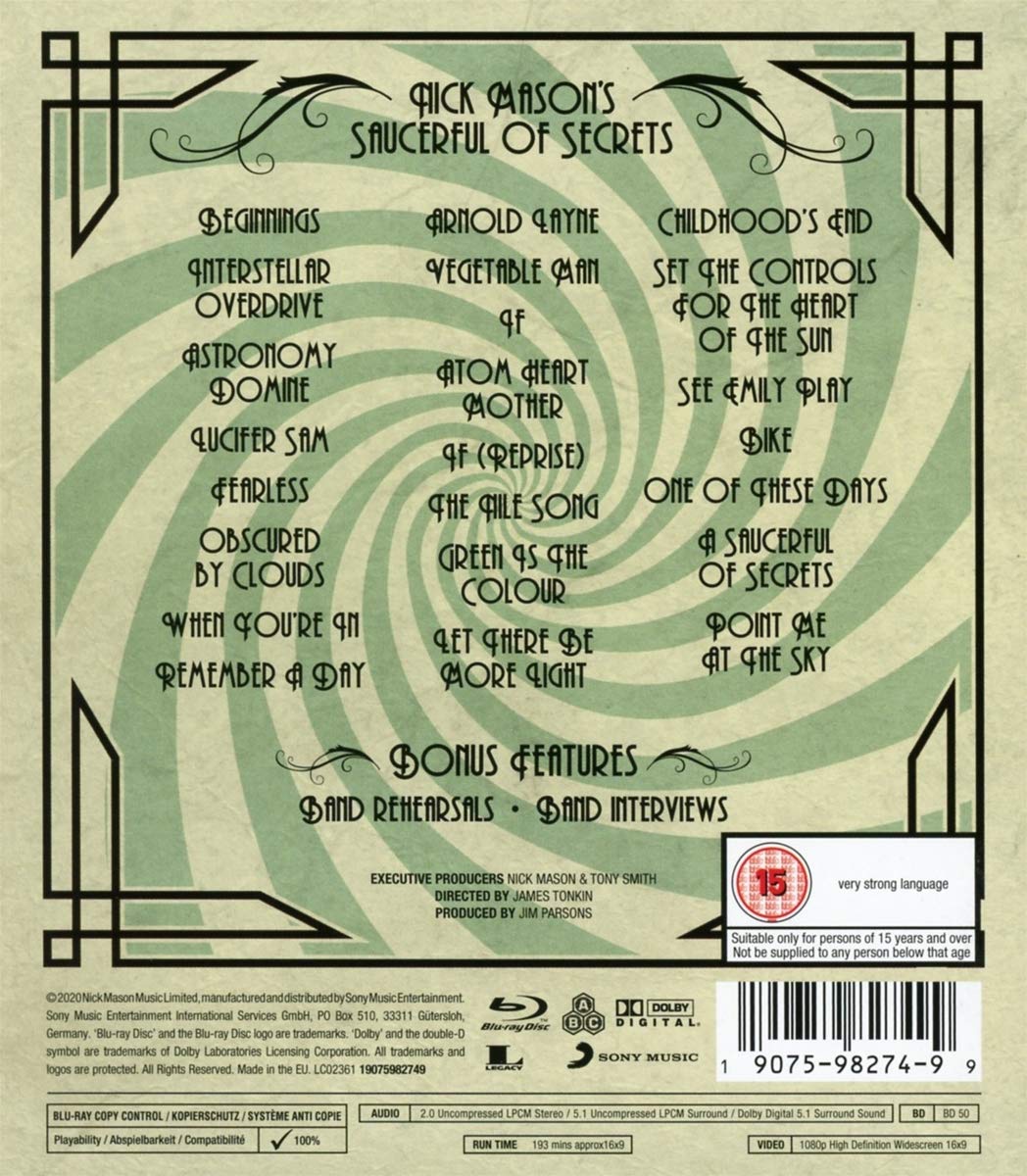 Now this is what has been missing for a very long time. Songs that have rarely Or even never been played Live by any of the Floyd members either passed or present. It’s a really enjoyable concert to both watch and listen to and you can see they’re all really enjoying doing there thing with these great songs. I saw them playing in Vancouver and they have definitely improved since then and I thought that was a really great show already. It’s nice that they don’t stick to the songs just like on record and do some good improvising on many tracks. The sound is really good and the surround effects are nicely designed as are the camera angles (35 cameras used I believe) and visual effects are very interesting and surprisingly fresh. The extras being interviews are ok and enlightening. The option to watch with or without filmed interludes is a good feature also, unlike Rogers The Wall movie. Excellent Video.

I have the CD/DVD version and I really enjoyed the film. Even with the reduced DD audio quality of the DVD, the sound was great - every instrument came through clearly (bass especially) and I liked those moments where they really took advantage of the surround speakers. The Syd material comes off the best in that regard (the opening Interstellar Overdrive is fantastic!), but the opening segment of Saucerful also is a standout, with some nice panning across speakers. I would have liked the use of surrounds to be used more consistently - for several tracks, the rears are just ambient - but overall it's a fun tribute to my favorite Floyd era. I'll give it a 9.

I was pretty surprised at the way they did the weird camera warp/spin/twist type thing on a couple of songs too. I don’t ever recall seeing anything like that before and they didn’t over use it either which is good.

An example of how to do a live show don't over use the cuts don't overuse the video gimmicks. Let the music lead.
If you must intercut the music with interviews at least offer the option of just the songs.
Let the band have fun on stage and its the music which counts.
The SOS band are clearly having fun with the songs deferential rather than reverential.

Really brought me back to the show I saw last year. Well-filmed and edited and a very good sound mix, that I didn't feel was deeply immersive but just sounded terrific and had great surround moments at times. Thank you again Mr. Mason for playing Atom Heart Mother! 9.

Couldn't resist. Even The AmazonUS reviews were all 10s. And best of all, I'll have it tomorrow with Amazon's one day shipping!

4-earredwonder said:
Couldn't resist. Even The AmazonUS reviews were all 10s. And best of all, I'll have it tomorrow with Amazon's one day shipping!

You won’t regret it
J

Decent mix. Not really surround at all FYI. A noticeably compressed stereo mix up front and just hints of fx and a couple brief lo key pans and then audience in back. So... very authentic to the live concert experience. Very well mixed - don't get me wrong! (This band originally set the bar for surround. So, a comment.)

I might be biased from listening to a number of the live shows but this performance is just a little on the polite side. They came across more 'punk' for a lot of it. I thought they had some of that vibe in their vocal delivery. They initially hit me as reworking some of that original punk attitude into the vocals (where is was most certainly not originally) and I thought it was a really good fit.

There were a couple shows where the audience sang/chanted along with Celestial Voices which was incredibly moving! Nothing like that on here either.

A must have if you're remotely interested if you haven't figured that out yet.


Someone mentioned overdubbed drums?
The drums were mixed in your face bionic at the shows. No exceptions. There would have been decent bleed in all the vocal mics at the very least. He would have really had to just nail the exact hits. All the improvised fills as he does. There's no hint of anything amiss. I think it would have been significantly difficult to overdub drums and get the original parts perfectly. And there's absolutely no need! See how mic'd up that drum kit was?! They could have lost half the drum mics and still made a studio perfect mix with what was left!
A

jimfisheye said:
They came across more 'punk' for a lot of it. I thought they had some of that vibe in their vocal delivery. They initially hit me as reworking some of that original punk attitude into the vocals (where is was most certainly not originally) and I thought it was a really good fit.
Click to expand...

It doesn't get any more blatant that "I don't want a holiday in the sun!"

My only annoyance with this one is that almost ALL of the spoken bits are removed, with only Nick's final comment before going to the gong left in. And without the buildup, what he says doesn't really make a lot of sense.

(For anyone who doesn't collect bootlegs or didn't get to see the show live: Nick said that in the past Roger always did the gong intro to "Set the Controls..." so playing it himself was a first for him.)

A pleasure to hear live the first Pink Floyd‘s songs. I enjoy specially Atom Heart Mother. I voted 9 because I miss the Pink Floyd‘s voices

Fantastic concert and tracks!!!! LOVE IT!!!!!
But from me only 9 and not 10 because of the fourth audiotrack with the discrete WelcomeOnTheStage 5.1 mix is missing

I voted "9". Not sure how I'd improve this, were I producing, other than to use the surround field a bit more.
Roger Waters - Us + Them/Nick Mason's Saucerful of Secrets Comparison video:

edisonbaggins said:
I voted "9". Not sure how I'd improve this, were I producing, other than to use the surround field a bit more.
Roger Waters - Us + Them/Nick Mason's Saucerful of Secrets Comparison video:

Absolutely agree with you after watching your video review. The SOS show made me actually feel like buying it on vinyl but there’s no way I’d bother buying U+T on CD or Vinyl. It’s one of those shows that was better being there than the video is unlike SOS which was great to see live and watch again on video. Cheers

edisonbaggins said:
I voted "9". Not sure how I'd improve this, were I producing, other than to use the surround field a bit more.
Roger Waters - Us + Them/Nick Mason's Saucerful of Secrets Comparison video:

I didn't hear so much difference on the vocals side on the 2 tributes show. I enjoy both but prefer Waters for the music. And Waters 5.1 surround has been used with more efficiency. Visually it's 2 very different shows. One was shot in a smaller venue with an elaborate light show (SOS) and the other one is a bigger venue with a big stage and big screens with a less elaborate light show.
M

I gave it a "9". The mix suits the show well. I particularly enjoyed the homage to the Pink Floyd's original 60s lighting effects during Interstellar Overdrive - it brought back some happy memories of seeing the original line up in a local hall back in the early days.
You must log in or register to reply here.
Share:
Facebook Twitter Reddit Pinterest Tumblr WhatsApp Email Link