Gimme 4 said:
Another old pic this one from 1973 in a rental house. Me facing away at the controls of the Ampex reel to reel I had, probably putting together a tape of tunes. My hair was a lot longer and actually covered the dome of my head. ( Wow! I forgot about that!) Only things 4 channel were 4 AR-3a speakers and the pair of JBL power amplifiers on the floor driven with Y adaptors from the Dynaco stereo preamp. I was on my way to quad soon.
View attachment 69410
Click to expand...

In the vernacular of the day: "Is that a boy or a girl at that reel-to-reel?"

This is where it all started for me; It was 1969, I was 16, first job, first paycheck, first purchase with my own money. Went to Topps (those of you from the Chicago area will surely remember Topps) and sunk my hard earned money into this hi fidelity beast. Yep, I was on top of the world! I should have bought 4 of them and I could have ran them simultaneously and had my first quad system. Oh well.............. Still works like a champ! More to come. 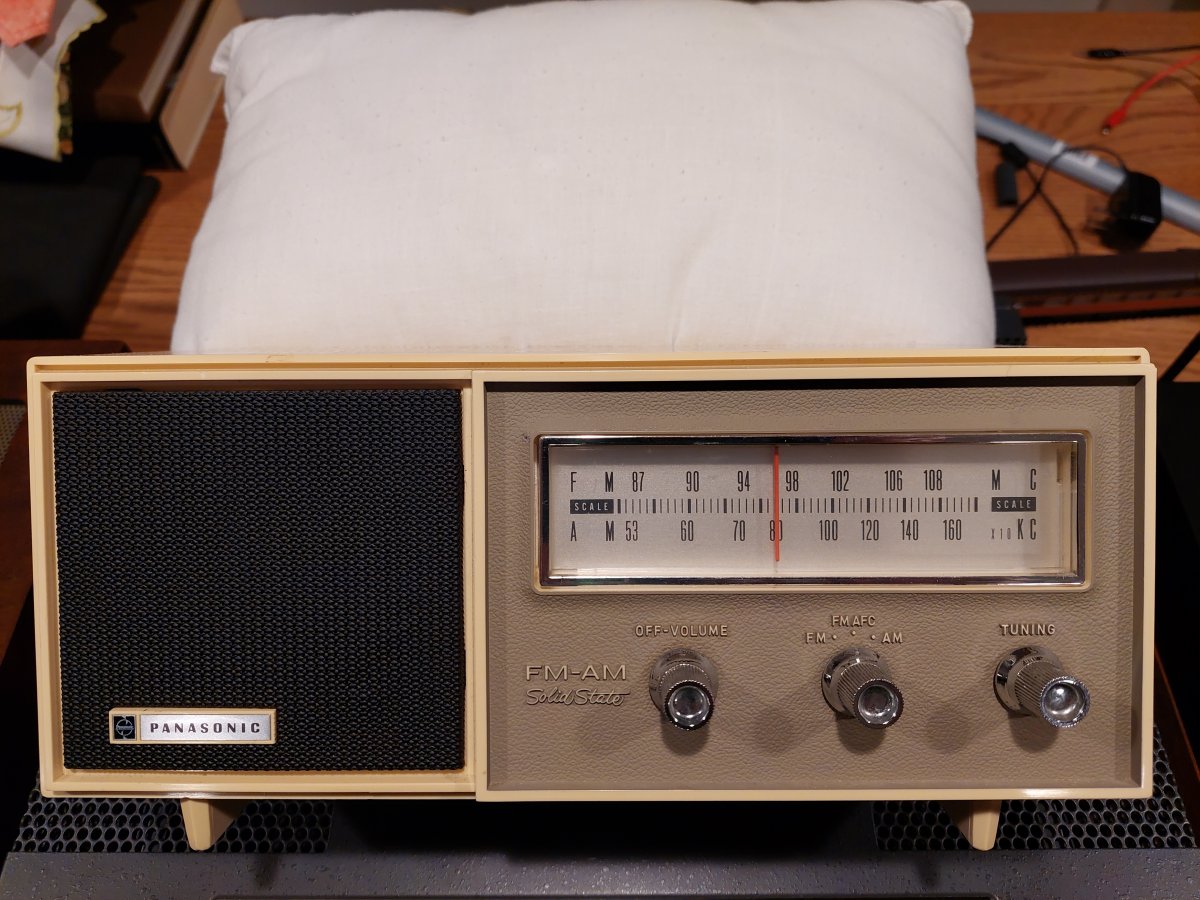 HiFiMan said:
This is where it all started for me; It was 1969, I was 16, first job, first paycheck, first purchase with my own money. Went to Topps (those of you from the Chicago area will surely remember Topps) and sunk my hard earned money into this hi fidelity beast. Yep, I was on top of the world! I should have bought 4 of them and I could have ran them simultaneously and had my first quad system. Oh well.............. Still works like a champ! More to come.View attachment 69474
Click to expand...

Interesting how consumer tastes have changed in 40 or so years. Inflation aside, something as simple as a tabletop AM/FM radio was a serious investment back then. If that came out today it would be treated as a throwaway item.

EDIT: This had to have been one of the last few imports allowed to list the radio dial scale in kilo/megacycles. I think by 1970 the FCC or FTC required all radios to be listed in kHz/mHz.

Yes it is and last year i was able to get a new shibata stylus for it. I also have yellow stereo stylus. It plays like a charm. It's impervious to static and high frequencies are amazing even do they are filtered out above 15khz.

I have two EPC-450C-II and one EPC-451C. The first 450C-II came from an auction a guy had years ago for a few cheap ceramic cartridges and I don't know exactly what made me look at the auction but when I did, there it was, sitting right in the middle of those other cartridges. I won the auction for 35 bucks. The stylus worked pretty well but seemed to be worn as it started to mistrack (for CD-4) in the inner grooves.

I then got a genuine 451C stylus for 20 bucks, I believe. I was in business and I used the 450C-II with the 451C stylus for a few years until another guy had an auction for an unused 450C-II in original packaging and all that. That one cost me 300 bucks but what the hack, not going to see many of those, especially new.

They sound very similar and I track both at 2 - 2.5 grams. The 450C-II is perhaps a bit more detailed but not by much.

I have a yellow stereo stylus for a regular 450C but have never found a body for it.

Dude, even your "home videos" are cool. I thought others might enjoy perusing your YT channel:

What is that Kadanse on about?

Sonik Wiz said:
Hey Marty!
I don't remember exactly which thread but about a year ago last June you said the doc's gave you a year to go. Well you've beat that! Fight on, baby!!

Oh yeah and really nice toys you have.
Click to expand...

Well. I just got my lugs tested today and the normal 6 month loss stopped this time, so luckily I've got an extension on my time line.

Sonik Wiz said:
Dude, even your "home videos" are cool. I thought others might enjoy perusing your YT channel:

What is that Kadanse on about?
Click to expand...

Kadanse was a one-shot show to raise money. I used to be the art director of a line-dancing demo group and it was my farewell show.
For this show we were all in "counter-employment" roles as there was no country music there. Dialogs were pre-recorded with their own voices and the lip-sync was almost perfect. For "America" i had to adapt the very complex choreography of Jerome Robbins which span one block, down to a 35 x 25 feet stage using country steps for the most part. We created this in about 6 weeks from scratch. I worked few months before that to get everything ready for a quick learning curve.
We also did a number about Grease with a funny Drive-in movie i filmed, edited and directed.
Last edited: Jul 30, 2021

Imagine this in quad.
My mind at 3am

scifi said:
Imagine this in quad.
My mind at 3am

He really is a National Treasure! How can one person be so talented? I don't think there's an instrument he can't play. His one man shows are a joy both musically and comically. He is also perhaps the best guest ever on QI- 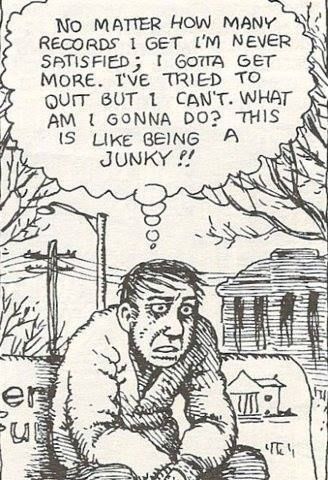 I picked up a pair of Sansui reverb’s model RA 500. For some reason (quad?) Both were owned by the same person. He etched his ID in them as an anti-theft deterrent. The guy wanted $50 for one, or $80 for both. So I grabbed them both, one for me and one for my friend. They don’t produce as much affect as my Pioneer SR9. I thought that the color display was going to move with the audio, but it does not. It’s just gets clear when you turn the reverb time down and blurry when the time is increased. 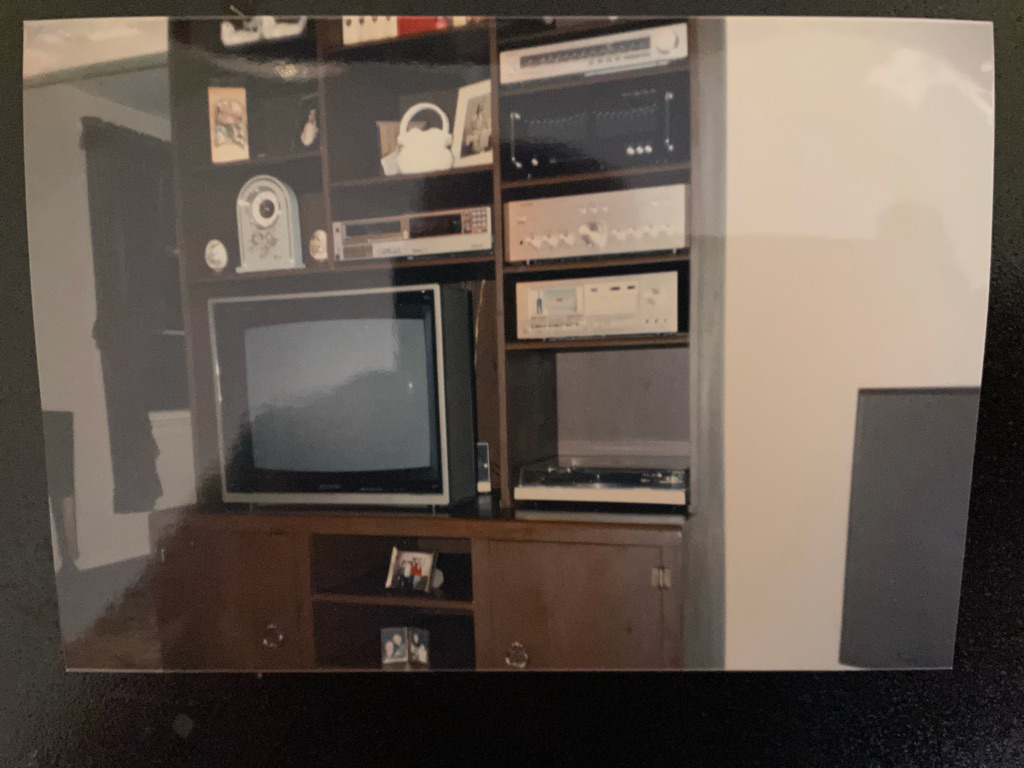 Vintage Saturday! Just going through some old photos and found this one from the early 80's. Don't remember all of the equipment, but think I know a few of them. My pride and joy Sony Profeel Monitor 27" (the big one, the other they made was a 20"). Awesome picture and I thought it was SO big then. They were basically studio monitors and had no tuner, had to watch tv via the VCR. Above it was the Sony SL-2710 Beta HiFi VCR, another fantastic machine for its day. Top right is a Sony tuner, not sure of the model. Under that the venerable ADC Sound Shaper SS-110 equalizer. Sony integrated amp under that, model TAF3A. Under that a Pioneer CT-F500 cassette deck. The turntable was either a Sony or Pioneer, I owned both at one time. I'm guessing it's a Sony. And the speaker on the right is one of my Advents model 5002 I believe. This set up probably JUST pre dated my first CD player. Good times!

I picked up this realistic quad synthesizer model QV3. It seems to me it is a very cheap component. All of the input and output connections are done through phono jacks. Also, the unit is so light, it doesn’t even feel like there’s anything inside of it. That being said, for five bucks I couldn’t resist adding it to my quad collection. I also snagged a vintage Memorex record cleaning kit 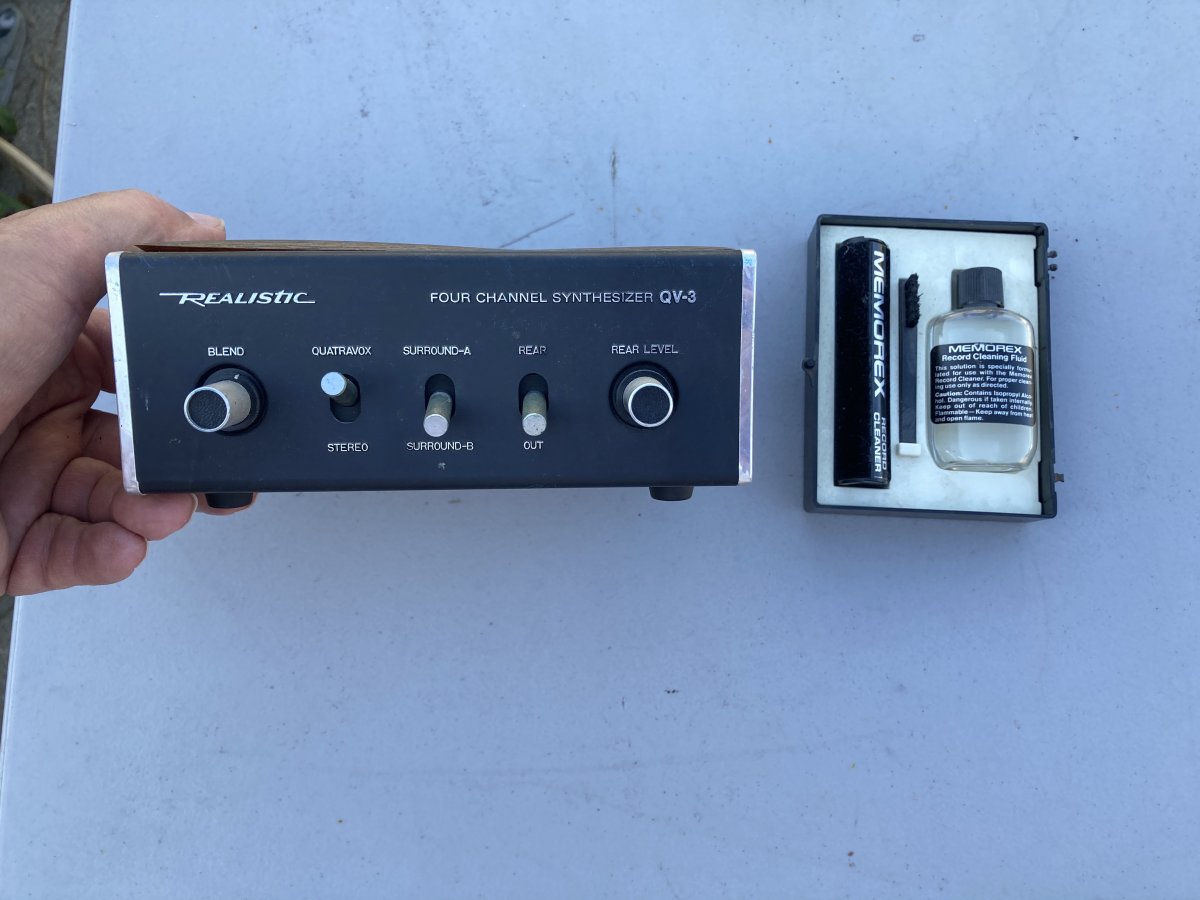 I was right. Three switches, two potentiometers, and one resistor. 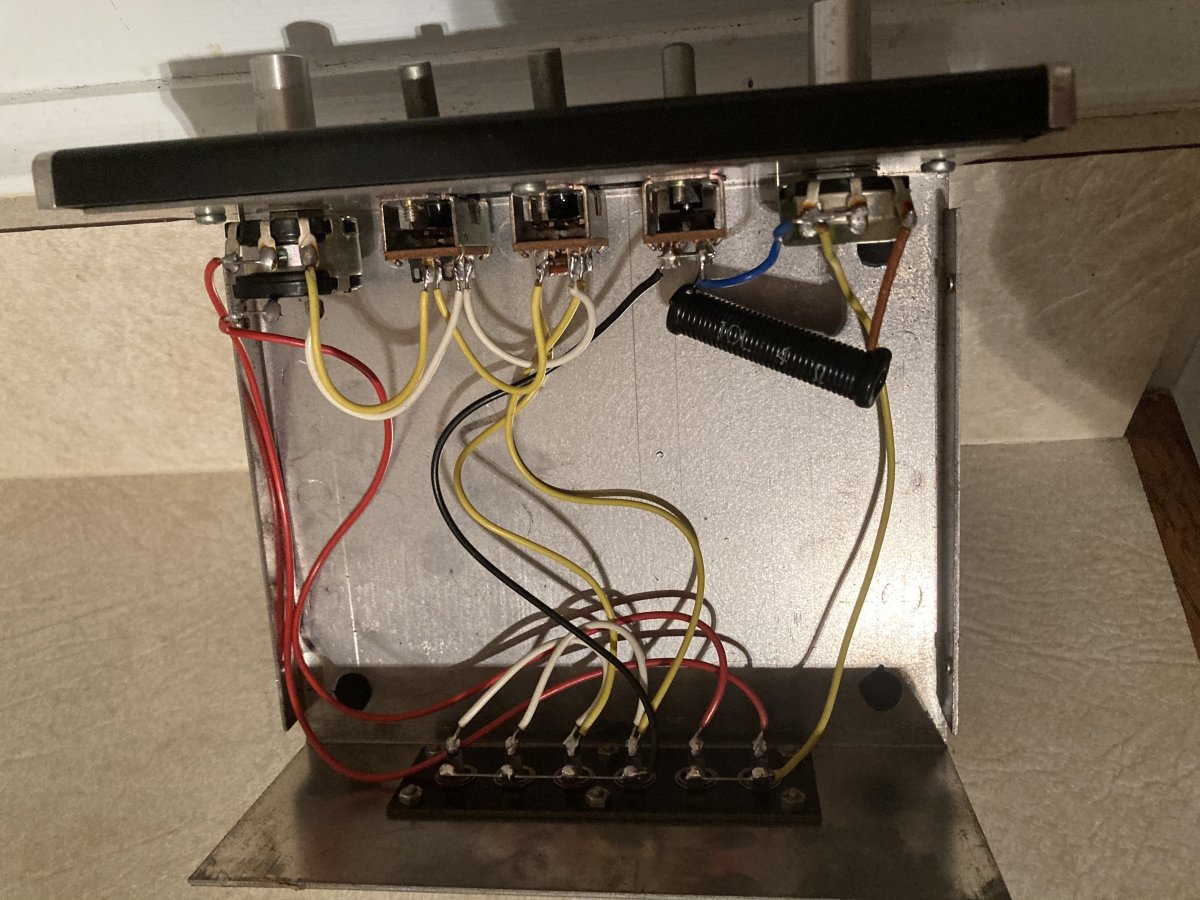 1968rt said:
I was right. Three switches, two potentiometers, and one resistor.
Click to expand...

Easy enough to build with some heftier components of course. Here's one I made a while back with variable blend... 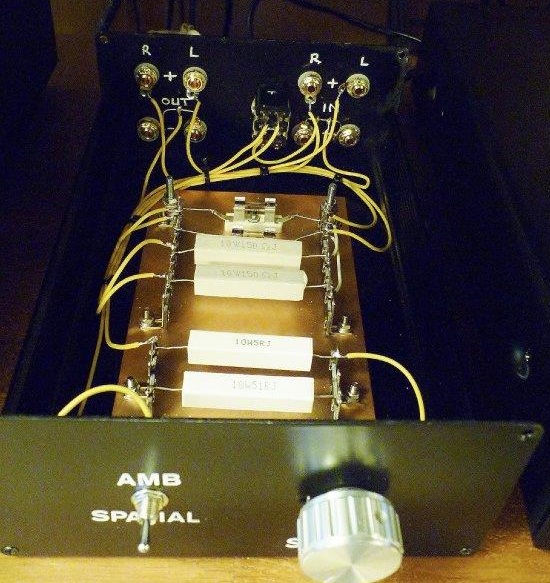 The trouble with these speaker level Hafler boxes is that they are critically dependent on the accuracy of your amplifier's balance control to establish the rear null. All a bit too fiddly, best done at line level with op amps (when it works rather well).

EPC-460C with open + sealed styli, now just need to got the sh3480 demodulator working properly, seems to have lower level in the left channel. 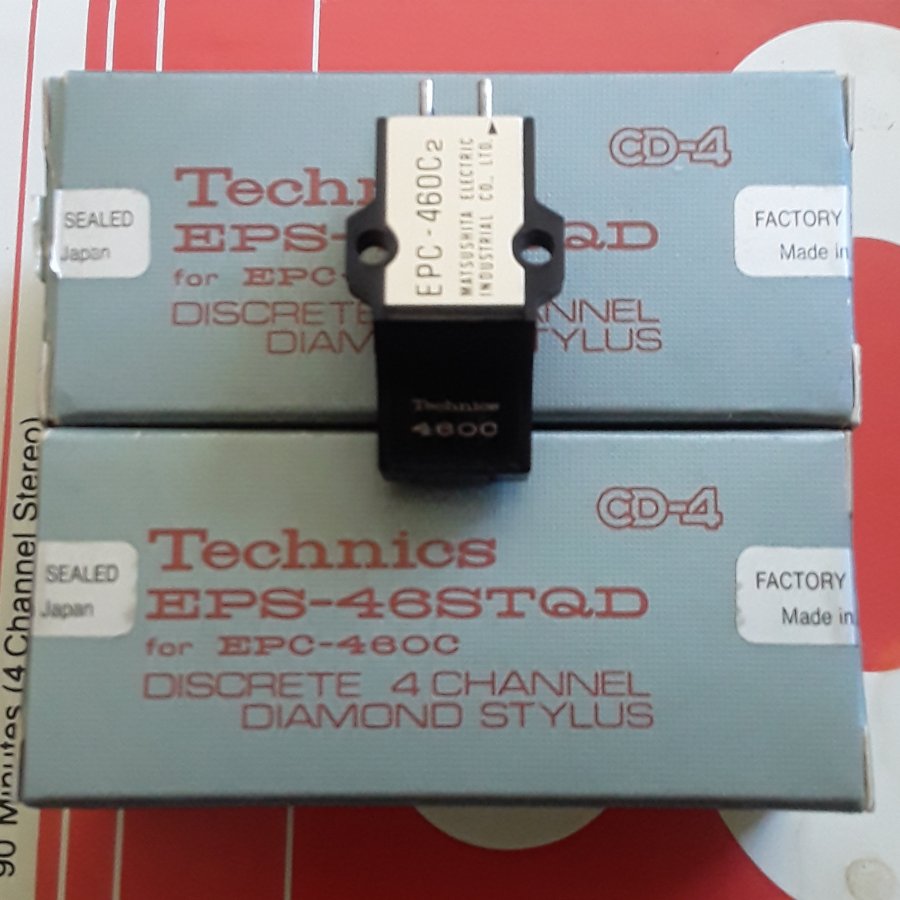