the MAGIC (??!!) of LP pressings from early Digital recordings

Soooo...
I am sure I have asked this before...
This has always pixellated me ever since I was able to get my Mac (or/and PC) with the Spectrum/Spectogram display back in the early 2000s and started comparing the CD versions to the LP versions of the same album.
Of course there are very early CDs that were apparently 14 (!!!) bit and the A/D converters were not nearly as good as they are today.
For example, my favorite analog recording and mix comparison where the LP wipes the floor with the CD counterpart is Thomas Dolby's "Aliens ate my Buick".
Of course , there are others where the point is moot and they y both sound almost the same like Mr. Mister's "Welcome to the real world". (I am referring to the FIRST CD pressings, not remasters , etc.), but those are analog recordings and mixes.
I am referring to early Digital (44.1 or 48 KHz) recordings and mixes.
Here is one of my favorite instances: Rush's "Hold your Fire".
Question:
WHY THE HELL ARE THERE SO MANY HARMONICS ON THE LP VERSION?
Here is "Force Ten" on the HD Tracks version, notice how there is basically nothing above 20K: 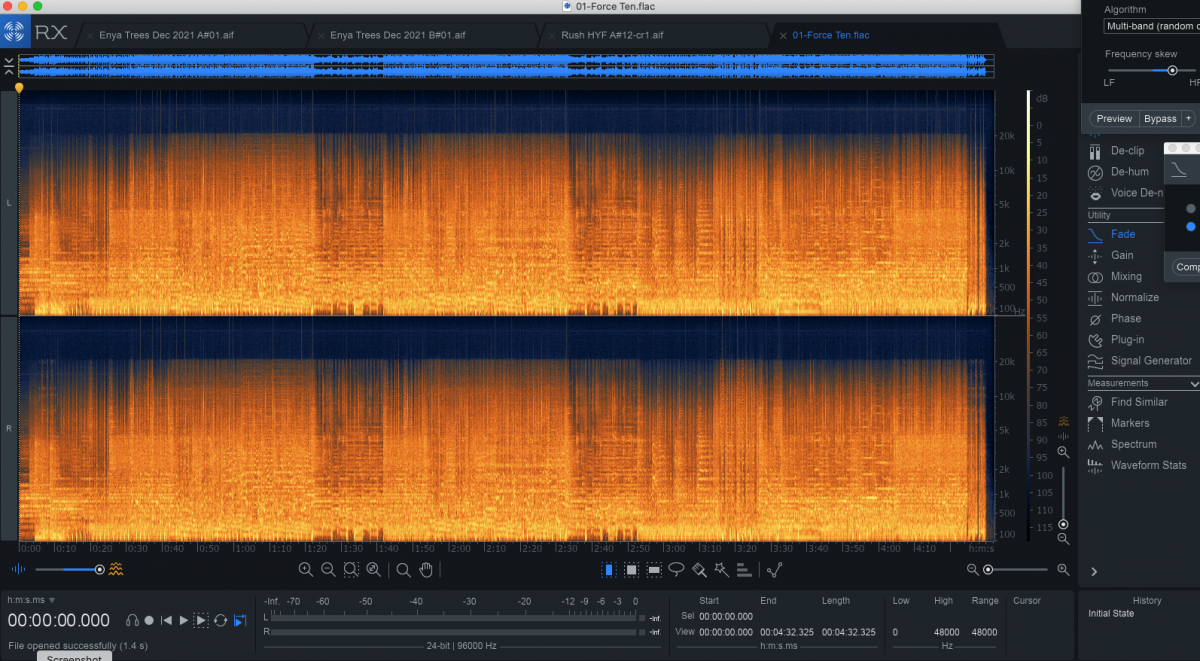 and , here is the LP capture done in my system: Technics Linear Tracking TT with an Ortofon OM30 cart, an Akiyama preamp , into a MOTU 828mkII and an iMac running Logic Pro. Notice all the extra stuff. And NO, I did NOT touch it nor EQ it!
It looks like an analog recording and mix, doesn't it? 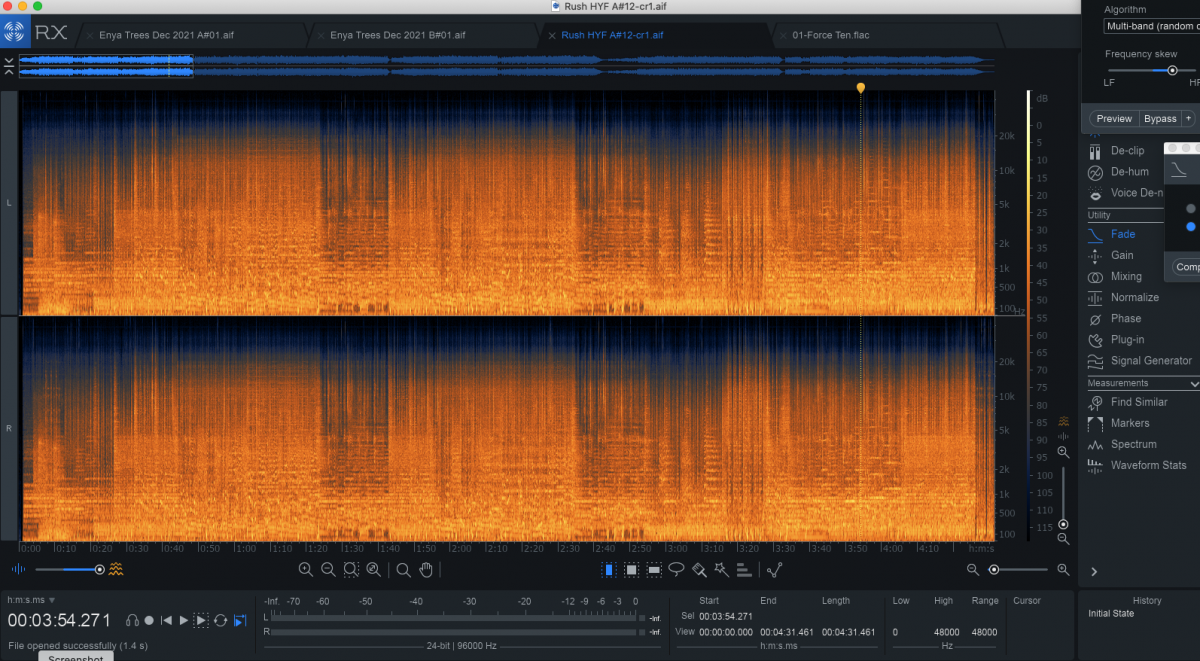 These extra harmonics can be attributed to:
-the stylus playback
-the fact that the signal was cut into vinyl creating "waves" since the vinyl is mostly soft and more akin to liquid.
-???(Please feel free to add your info)

I have had my wife do a blind test with her playing the files and I could tell which one was the LP against the HDTracks, of course , the LP sounds brighter...

This is one of the reasons I prefer to get a new release on LP rather than on CD and why I prefer early pressings cause the masters have not deteriorated; remasters are good and well but 30-40-50 year old tapes have already deteriorated.

Have I opened a can of worms? I hope so...
squiggle squiggle
HAPPY NEW YEAR!!!!
J

44.1k digital truncates at 22kHz. Nothing more, nothing less. There's no audible content up there or anything that affects audible content in any way, FYI. But there are harmonics that continue up if you choose to record and preserve them. Think of this as meaningless artifacts outside the audio band.

Then, CD and vinyl are simply recording containers. Both are pretty good. Someone can simply put a better copy of a recording to vinyl than to CD. When someone does that (damages the CD copy in their mastering, that is) they should feel bad about their work, frankly.

Fair points , indeed...
BUT
yes, but the question is, WHAT CREATES the extra harmonics?
Since it truncates at 22K , why does it look like a non early digital recording?

Do you know the lineage of your LP version? Mastering process for LP is usually different than CD, and would probably include an analog stage somewhere, which may not be clamped at 20kHz before pressing

Would it be enlightening to try High Pass Filtering of 16K up to 22K (maybe 48db); and then listen back carefully to only that filtering on good headphones (gradually turning up the volume); to learn if anything pertaining to the actual musical sonics reside there, that you can actually hear?

I've tried that on some music and couldn't hear anything above about 14K and learned from testing with a medical audio specialists that that's about where my hearing starts dropping off rapidly. But she did mention that was fairly typical for someone in my age group that still has good hearing (mid 60's.)

I feel fortunate with that!

Seems the most likely source of 'warmth', LPs can have a distortion range of 1%-3% (which we don't seem to mind), it does depend on the signal level cut, the duration of a side and the LP material, so number of grooves crammed onto a side and, the thickness of the plastic between the grooves, which deforms due to the stylus pressure. Best vinyl I have are some 45rpm 12" singles, good fidelity, Aces's "How Long" is the best.

The other thing is if you look at the spectrogram the signal level for frequencies above 20kHz is -75dB to -95dB so way way down in level, so that is just noise.
J

kap'n krunch said:
Fair points , indeed...
BUT
yes, but the question is, WHAT CREATES the extra harmonics?
Since it truncates at 22K , why does it look like a non early digital recording?
Click to expand...

Some noise and distortion. And analog waveforms just do that kind of thing. The weird "different" thing is the digital container with the hard truncate. Since we're only interested in the actual audio band it works out well.

Same with light waves. We're only interested in the visible (to humans) band so the equipment we make to handle visual is limited to the visible band. Digital versions would be a similar hard truncate.
J

When people describe vinyl as sounding "warm", that translates to me that their system has high end attenuation and possible dynamic range limits. Vinyl working properly should not be "warm". It should be an accurate reproduction of the source.

I spent a decent amount of time calibrating my cartridge alignment and table and I feel the results are accurate to the limits of any particular pressing. No "warm" or "tubby" sound in at all.
You must log in or register to reply here.

Opening a can of worms; Why do early digital recordings have musical info well above 22K on LPs? Where has this been discussed in Pro Audio?