I updated the firmware on my Cambridge Audio BD650 to the latest available. No difference at all. None of the surround Blu-Ray discs will get to the top menu. I get the first intro screen «WARNING copyrights etc», but then it just goes to a black screen and nothing reacts. On the video disc I get to some sort of menu screen where I can get some pointers hovering on a black screen, and when I navigate them, now I get a pop-up menu with names of tracks but no other info. I can press a track to play it, but then I only get audio, no video.

So these Blu-Ray discs are complete crap and useless. If a 10 year old BD player can’t play them, then f*** whoever authored or produced them. This is totally unacceptable, and free replacements should be made immediately. We have heard of way too many users who can’t get these discs to play. They were the major reason for me buying this huge box set, and they are completely worthless and useless.
J

Since I have the latest Oppo they play for me but this shouldnt be happening.

A small consolation but when these boxes go out of print which may be soon you should be able to sell and get your money back then purchase the DVD surround discs.

I agree that you should be sent free DVD replacements.

I think the issue is that the world has forgotten about the engineering maxim of backwards compatibility as its 'old fashioned' and so everything must be the latest. So I suspect that authoring software updates have removed the backwards compatible offering. I have some Mathematics software which can't open old files from 2 iterations ago

It has also happened with HDMI & HDCP which has caused me a lot of grief.

Sorry if this has been answered earlier in this thread, but can someone confirm that the DVDs in the individual sets are Region 0 and playable on all US players? Thanks so much!

ogrequad said:
Sorry if this has been answered earlier in this thread, but can someone confirm that the DVDs in the individual sets are Region 0 and playable on all US players? Thanks so much!
Click to expand...

Thank you, Stephen! I can't wait to finally check out your mixes of these albums!!

JediJoker said:
Does anyone here own both the box—or one or more of the individual releases—and one or more of the SHM-SACD releases? If so, how would you compare the mastering quality between the two (for the original stereo mixes, obviously)?
Click to expand...

A few years ago I compared the SHM-SACDs with the original 1980's CDs and came to the conclusion that they were really close in sound. Probably both flat transfers. The SACDs were a bit smoother, but ultimately I only kept a couple of the original CDs. Bear in mind that I only discovered these VDGG albums just before doing the comparison so I wasn't an expert on how they normally sound.
(I also heard the 2005 remasters and found them utterly horrible so these are out of the equation.)
So I guess it's possible to compare the 2021 remasters to the original CDs and arrive to similar results as with a SHM-SACD comparison.
Anyway, I'd be interested in what other think of the results. I probably won't have the time to compare them for a while.

Wonderful to be involved with such incredible music, production and sound. It is also so wonderful to actually receive the physical products - it makes it all completely real!!

Thanks for all the lovely responses. 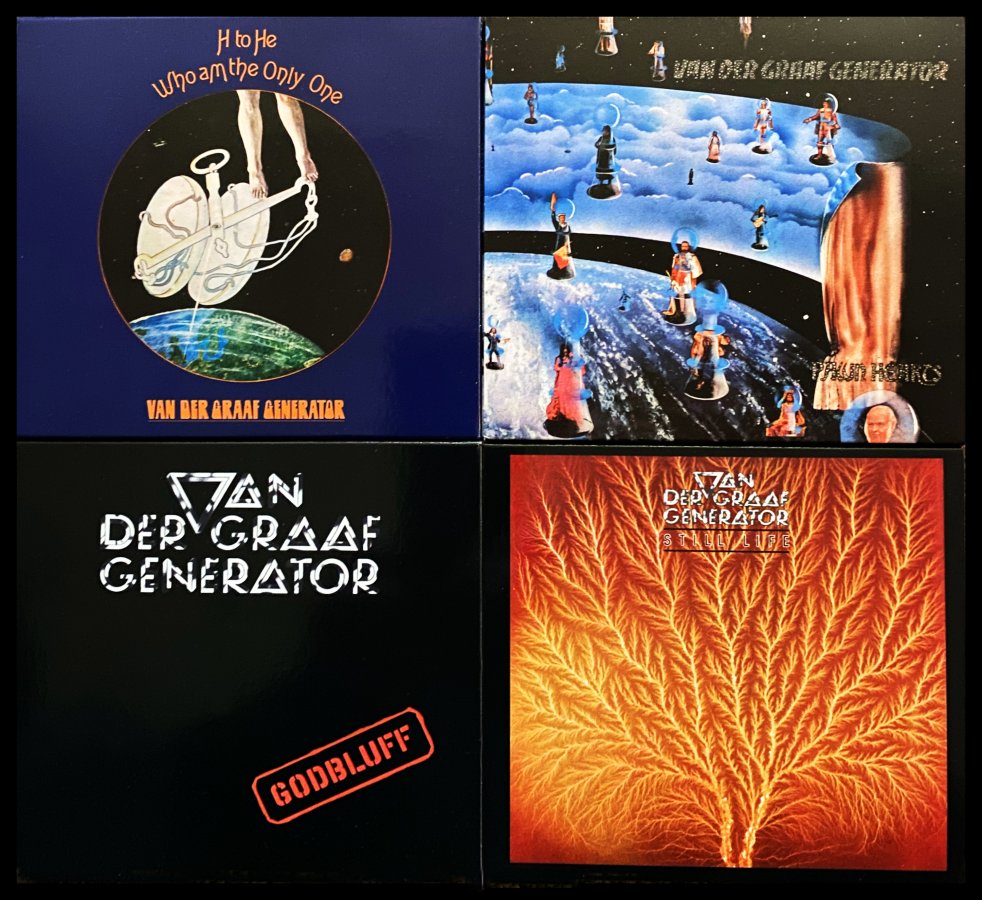 You did a wonderful job with the mixes. Accolades are well-deserved.
S

I am still bummed that my Blu-Ray player won’t play these discs. Is there any chance that a later firmware update could take care of it, or is it also something to do with the hardware of older players? It really, really sucks in any case. Does anyone know where I can contact the company to let them know about this issue? I tried through the vendor I bought it from, but only got some lame and useless responses and finally an offer to return it.

That’s not what I want of course, because the set in itself is absolutely stellar, and easily purchase of the year for me. I was already somewhat familiar with VdGG through The Box from 2000, but they never hit me entirely. Compared to many other prog bands of the era they are really, really unique and different, complex and sometimes willfully difficult. Hamill can be an acquired taste, vocally. And finally, they are not a band that really lends itself well to piecemeal or anthologized listening.
What I am getting at is that I finally am beginning to «get» this band, in a big way. I’ve been listening obsessively for the past few weeks, and the amount to really discover is staggering. I have only really deep-delved into the Godbluff and Pawn Hearts-era discs, but...WOW! This stuff is deep. The Godbluff disc with the BBC versions of Scorched Earth and Sleepwalkers has been on constant repeat in my car. It’s a sign of some amazing music when you get a new favourite song every day, and you just want to repeat the disc over and over. Godbluff has really knocked me out. Definitely one of the best albums of 1975.

I got doubled dipped on the dvd's, if someone in the USA is interested on all 4, I believe all sealed, let me know.
P

How much per album? amazon is like 44ish per if cheaper i might . I just got the H album come coming today.