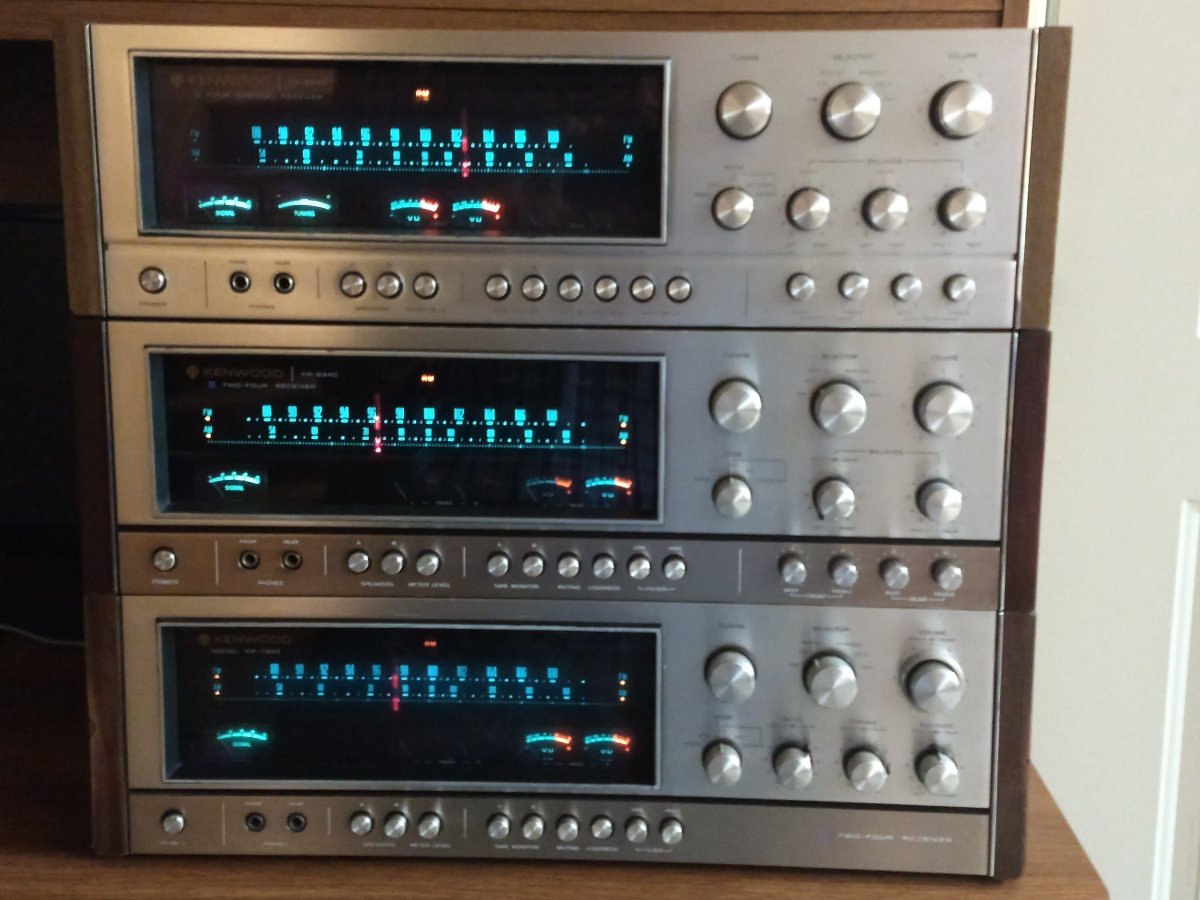 It was fun seeing your post. Some people stack speakers. You stack receivers.

Kenwood has figured prominently in my past if not present. With my 1st real job with my 1st real paycheck I went off to the local Burstein-Applebee store & purchased a Kenwood integrated stereo amp, the KA-2000:

40 wpc & solid value/quality for the time; 1969 me thinks. On my 2nd paycheck I bought a Garrard MK II turntable & Shure something number cartridge. I liberated my parents KLH speakers & was very happy. This was the set up I with an additional Hafler type rear ch speaker that got me hooked on surround sound.

Eventually I ended with with a Sansui QS-1 decoder using the KA-2000 as the rear ch amp & a Dynaco 120 for the fronts. Empire Jupiter speakers in front, KLH 55 speaks in the rear.

In a year or so I got tired of fiddling with the various mis-matches in a set up like this & traded all the electronics on a shiny new Kenwood-9940 like yours:

Full logic with wave matching SQ, RM that did not much and CD-4 that worked as well as any demodulator I've had. Mod crazy as I am I removed the power xfmr & wired on 4' extension leads so I could potentially reduce and 60 Hz interference. It didn't make any difference as far as I can tell except render the unit impossible to trade in or re-sell. I built a rather nice console cabinet designed like an over/under washer/dryer combo. My TT was on the lower left side & my 4 ch quad reel to reel on the right. In the upper portion I built in the 9940 along with a plethora of various pan pots, reverb, cross mixing controls. I would take stereo & manipulate it to 4 ch sound & record on tape. Pre-historic up-mixing!

When I married I took the Kenwood with me but left the cabinet behind. I saw receiver technology as too restrictive as products like the QSD-1 & Tate decoders were becoming popular.
So I bought 2, stereo integrated amps, the Kenwood KA-76: 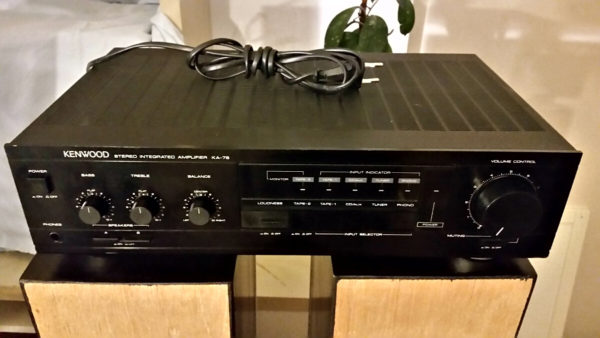 Tape out went to the input of multiple decoders whose output was selected by the inputs on the KA-76. It worked pretty well & liked the light up input selector & groovy power meters.

Thanks to an employer cashing out a profit sharing plan I had the bucks to buy some improved stuff. First up was some Infinity Kappa 8's for front, Kappa 7 for rear. Upon listening they sounded harsh & it seemed detail was lost, not gained. I was really disappointed at my speaker choice. Doing some research I see the Infinity Kappa's have a very low impedance in the bass area & are really power hungry. I looked at big Hafler amps & big Adcom amps. I stettlled on the latter. The difference was amaziong. Clean un-distorted sound, tight deep bass, excellent detail in the highs. It seems the KA-76 used hybrid power output modules (really big IC power amps) & just couldn't meet the demands of the speaks. In this way, even if the 9940 was lower power it might have worked better with honest decent quality output transistors.

So that's more than you wanted to know about my love affair with Kenwood. Just like Jann, my 1st real girlfriend long ago, gone but not forgotten.
J

My first real stereo system contained a Dual 1225 turntable......still working and it did does CD-4 and a Kenwood KR 5400 35 watts per channel. Loved it used it for many years. It took plug ins for 4 channel. I had no idea what that was then. It is sitting in a box in my garage with the capacitors no doubt leaking by now....

I had several Kenwoods, culminating in a monster I paid $555 (military discount!) for that had a slide in CD4 unit in the back. I bought this one at a military audio store. Don't remember model number and this is the only Kenwood I kept, even after the Sansui's.

Seems like I had one that had a little remote that would change volume and FM presets? IIRC the volume was on a servo so the knob actually moved. But all this is from early 70's memory so take it with a grain of salt. This was my first Kenwood I think and I bought it used with a pair of infinity speakers.

There’d been a Kenwood company in the UK since 1947 making kitchen appliances, so the Japanese company couldn’t use that name over here and they had to stick with their original ‘Trio’ branding on this side of the pond. The result is that if you ask anyone in the UK to name a Kenwood product they’ll almost certainly say : 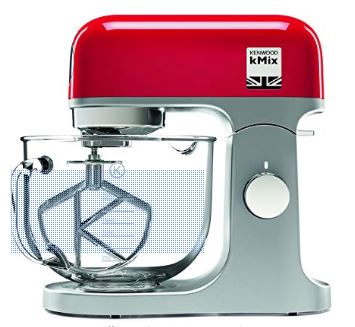 Soundfield said:
There’d been a Kenwood company in the UK since 1947 making kitchen appliances, so the Japanese company couldn’t use that name over here and they had to stick with their original ‘Trio’ branding on this side of the pond. The result is that if you ask anyone in the UK to name a Kenwood product they’ll almost certainly say :

I like older Kenwood but only own analog dedicated 2-channel stereo Kenwood seperates and sources and thus nothing digital and no receivers no Quad!
I do own thus the following mid 70's till 1981 vintage Kenwood seperates:
Kenwood KA-7300 and Kenwood KA-7100 integrated amps, Kenwood KT-7300 and Kenwood KT-7500 tuners, Kenwood KX-620, KX-830 and KX-1030 cassette decks. And a Kenwood KD-3070 direct drive turntable.
Last edited: Jan 29, 2020
You must log in or register to reply here.
Share:
Facebook Twitter Reddit Pinterest Tumblr WhatsApp Email Link