JediJoker said:
I would convert to PCM and then normalize to a sensible level on a per-album basis (to preserve inter-track dynamic relationships). I find -1dBFS to be a fairly safe normalization target.
Click to expand...

I have converted the DSD files to FLAC. Should I just amplify in 24 bit directly or move to 32 bit float first and render in 24 bit again? Thanks

bmoura said:
As always the best way to decide is to compare the various files (WAV and FLAC).
Along with the different software and hardware approaches to converting the files from their original format to FLAC.
Click to expand...

And of course your comparisons must be double blind or equivalent (e.g. ABX testing). If you go to the effort, you'll find that you can't tell the difference between the sound of various flac encodings and wav, because they're identical by the time they hit the DAC. So much snake oil.

albertop said:
I have converted the DSD files to FLAC. Should I just amplify in 24 bit directly or move to 32 bit float first and render in 24 bit again? Thanks
Click to expand...

Just leave it in 24-bit. Depending on the software you use, the processing will be done in up to 64-bit floating point. And if not, any difference in result won't be audible, anyway. Save the time, CPU, and drive space.

jimfisheye said:
First, I use Sonore iso2dsd (a free Javascript app) to rip a SACD iso image to DSD files.
(I feel like there should be a better way to do this... A Java app? ... But it appears to work and it's simple.)

I'll use XLD to convert to PCM and I save that in FLAC in the end.
Settings here are important!
You want 32:1 decimation to convert the DSD losslessly to PCM. This results in a sample rate of 88.2k.
Anything else gives a lossy conversion and the lossiness goes way beyond normal PCM to PCM sample rate conversion!

The levels on DSD program can end up anywhere from 6db low to 6db over zero after conversion to PCM.
If you have a hot example and convert it straight to FLAC (or any format in 24 bit), you will clip! Conversely, a lower level example will lose precision (even if only 1 bit). So it is critical to convert to floating point first!

Convert the DSD to 32 bit floating point wav using 32:1 decimation.
Open the wav files in your favorite DAW app.
Normalize the levels to just below zero.
Now render those files to 24 bit fixed and convert to FLAC.

Re: 176.4k sample rate sounding better than 88.2k.
You may have hardware converters that perform better as ultra HD sample rates vs. HD sample rates. (In the same way that most consumer converters found in AVRs run better at HD than SD.)
You could convert some program in 88.2k to 176.4k and A/B listen to try to confirm that. There's no actual meaningful audio content captured above 20kHz. HD sample rates are all about the machines we build (AD & DA converters in this case) running better. I'll assume you were being critical and this wasn't a red hearing chasing a different volume level. (You must match levels within 0.1db or you will pick the louder program as sounding better.)
Click to expand...

I just want to be sure that I'm getting this procedure correct. So I've shown the following screen shots of what I believe you are recommending. Please let us know if this is correct or needs adjustments. Thanks. 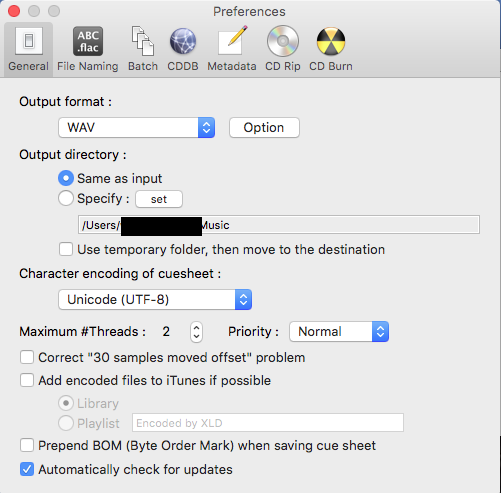 2. Execute the conversion to WAV in XLD.

3. Import resulting WAV file into Audacity (or other DAW App).

4. Normalize the levels to just below zero (-1.0 dB appears to be Audacity default):

5. Render to 24 bit fixed and convert to FLAC in Audacity: 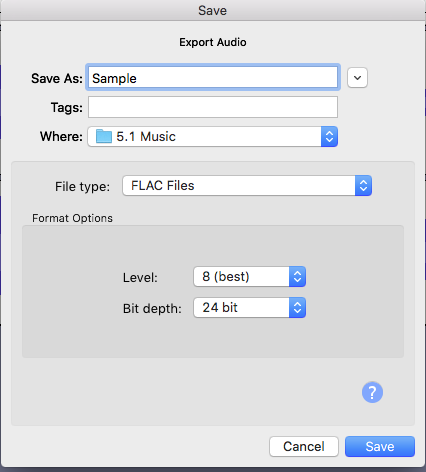 Step 1a is not correct. Select 32:1 Decimation instead of sample rate conversion.

I'm not as familiar with Audacity features...
FYI, make sure you select normalize (common gain) or whatever Audacity calls that. Normalizing the entire album of songs equally to the loudest peak for the whole album as opposed to normalizing each song separately which would alter the volume levels song to song. I'll usually normalize to -0.01 or -0.02.

I'll add that I haven't seen one of the 6db over transcodes in a while. The up to 6db low variety appears most common. That leads to: 9 times out of 10 you'd probably be none the wiser going straight to 24 bit fixed from DSD. The result would be a 23 bit recording. Match the level and A/B against the original and I'm pretty sure no one is going to pick that out of a shootout!

So a little bit academic. But DSD -> 32 bit -> normalize -> 24 bit is the path for a critical transcode and you'll avoid clipping the odd over zero ones that come up. That's what I think I know.
You must log in or register to reply here.
Share:
Facebook Twitter Reddit Pinterest Tumblr WhatsApp Email Link