This band has done some great music in the past years, the new album will have 5.1 mixes, here's from the web site :

Montreal-based art-rock band KARCIUS is back and will be releasing its fifth album entitled The Fold on August 18, 2018.

The Fold is a concept album that plays around the idea that what if our perception of reality could be interpreted as a form of dementia ?

“At the heart of every living being resides a power that lurks in the deepest corners of our minds. It can alter thoughts, render unconscious and feed on memories” - album prologue.

The Fold is atmospheric, catchy, heavy and adventurous. With its cinematic storytelling approach, the album gives a new scope and a fresh twist to the Prog Rock genre.

According to Simon L’Espérance “Every section of these songs are pictures, scenes and soundscapes. We wanted to create a new setting for our music so we produced the album like a soundtrack. The more the story elaborated, the clearer we understood where it took place and what purpose the characters within this universe served, the more we realized what a unique concept we were holding in our hands. Building it and elaborating it as the deadline came closer.”

This sonically rich production, the attention to detail and its unique concept marks a milestone for KARCIUS. The Fold will be released on CD, LP and HI-RES audio in August 2018. Also, expect a remixed 5.1 surround special edition for an amazing sonic experience this coming fall.

Great, will look into this, a pretty good band!

Sounds great just ordered the CD with FLAC, it will suit a 5.1 mix.

a thank you for the heads up, illustrated! 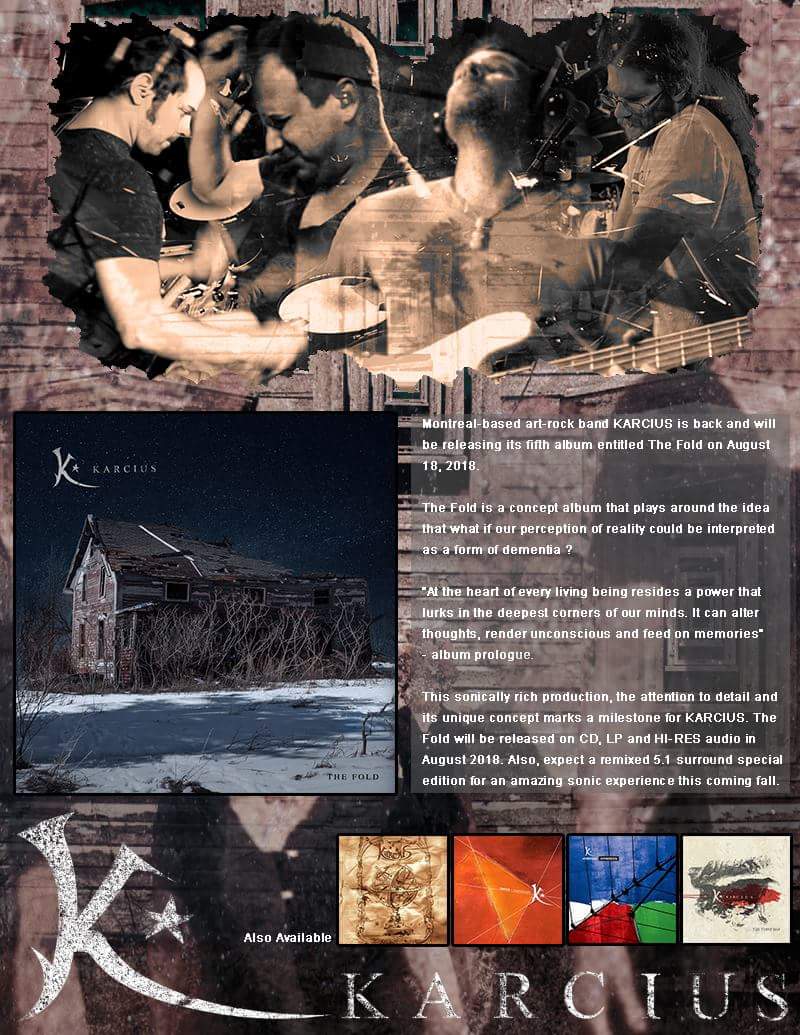 Blu-ray will include:
- A complete live show recorded at Crescendo Festival in France in August 2018, mixed in stereo and 5.1 surround format.
- A surround 5.1 mix of “The Fold” album

Watch this performance at
For the occasion, we offer a 15% discount on our STORE (https://karcius.bandcamp.com) with the code: goodbyelive2018
Click to expand...

Need to keep an eye out for this release in 2019

Will we have another year of surround riches?

I'm forever, the eternal optimist , so I say we sure will...

Karcius - Live in France (BD-V) is coming in July. 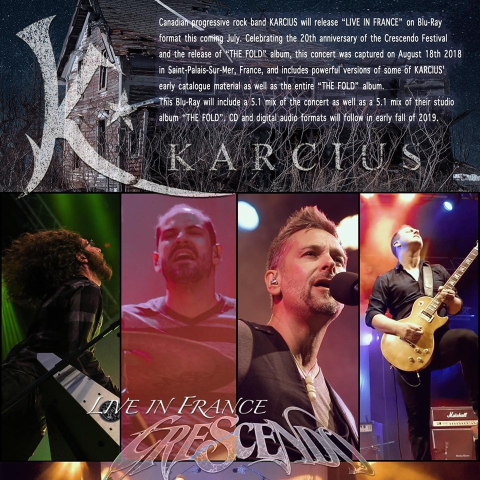 Yes, can get any better than 2 5.1 releases in the same package!

Pre-order for europe : Live in France

rugene said:
Yes, can get any better than 2 5.1 releases in the same package!

Pre-order for europe : Live in France
Click to expand...

And ordered ta...amazing what languages I can speak when I wish to buy surround music!!
P

Thanks for information you guys. I did go to band facebook to ask if you can order in Canada and got a reply in July yes.
Also gave this QQ link if anyone from band wants to add anything more. 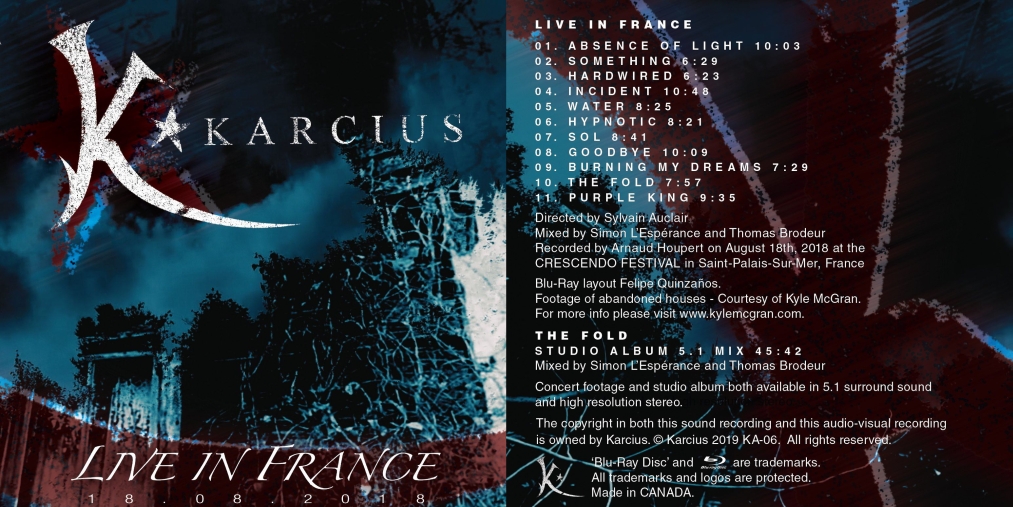 Ordered from Bandcamp 40$ CA total 42$CA with all PayPal and Credit Card fees...

I'll have to audition these guys.
P

Thanks for starting this thread, preorder placed as well.
Whats not to like about getting 2 5.1 albums as part of this package.
P

So I asked the guitarist Simon L’Espérance, "I hope this is very discreet and has good dynamics" and this was his response:

"It is full dynamic and not too much compressed. Very natural mix. It will be shipped as soon as we are back from Germany. Thanks !!"

Here is a review of the "The Fold" album which is on this bluray:

<em>The Fold</em> is Montreal based Karcius' fifth release, their current sound forming in the pr...

For those who don't want to spend a lot of money on physical cd or Blu-ray, the album The Fold is available right now :

We are very proud to present our album "The Fold" in high resolution 5.1 surround format! (24bit/48kHz FLAC) You can get it here:

I just got home after visiting my Mom and shopping and see email from bandcamp that the bluray is being shipped.

Getting a download is definitely a good option but the bluray does include a full live concert as well besides the latest album.

I'm living next door to the band and haven't received my order yet, it's so long that a man from the band is ready to bring me one directly at my home if it doesn't show up in the next days. I am fed up with Canada Post.
P

rugene said:
I'm living next door to the band and haven't received my order yet, it's so long that a man from the band is ready to bring me one directly at my home if it doesn't show up in the next days. I am fed up with Canada Post.
Click to expand...

Did you get your copy?
I thought since we are in Canada that this would show up at the door within a week, What was I thinking, guess Aerosmith had it right,"Dream On."
You must log in or register to reply here.
Share:
Facebook Twitter Reddit Pinterest Tumblr WhatsApp Email Link